If you haven’t been following the activities of Mr. Esmay of late, the A Voice for Men “chief operations officer” has been having a rather extended Twitter meltdown, posting endless puzzling yet impassioned Tweets to his own #SpankAFeminist hashtag, addressing an assortment of imaginary feminist enemies.

Some of the more puzzling have involved race, like his repeated charge that feminists are a bunch of white racists because, well, let’s let Esmay explain:

In Esmay’s mind, apparently, the fact that feminists recognize that rapists and abusers come in all colors is … a racist attack on black men.

(Esmay also seems to think that black men own “their women,” a belief that has a more than a little in common with the fears of white racists — like one Dylann Roof — who worry endlessly about black men raping “our” — that is, white — women.)

But, one might wonder, if feminism is fundamentally racist, why do many black women embrace the movement, even with reservations?

Esmay has now provided what he evidently sees as the definitive answer to that question:

You can tell how well-versed Esmay is in black history by the fact that he has misspelled the name of Aunt Jemima, the famous racist stereotype and pancake pitchwoman.

Esmay is even more contemptuous towards black feminist men.

It’s certainly true, as no sensible feminist would deny, that white feminists, even those with the best of intentions, have said and done a lot of racist shit over the years. Pretty much all white people have. (That’s not an excuse, just a sad fact.)

I’m just not sure that Esmay is really the best person to determine who is and who isn’t an “Uncle Tom.”

In addition to being a patronizing white dude, Esmay is the “chief operating officer” of a website that has repeatedly published the work of a Holocaust denier; has enthusiastically promoted the videos of white “nationalist” RamZPaul; and has been waging a long if somewhat ludicrous battle against the Southern Poverty Law Center, an influential and effective opponent of far-right racists; indeed, Esmay has himself declared the SPLC a “a multimillion $$ fraud organization” and “America’s #1 Hate Group.”

In 2013, Esmay’s boss at AVFM, Paul Elam, after glomming onto bogus information first spread by 4chan trolls and white supremacists at Stormfront, helped to lead an abortive hate campaign against a young woman falsely accused of discriminating against white male applicants to Georgetown university

EDIT: I removed a paragraph in which I got the Sad Puppies and Vox Day’s Rabid Puppies mixed up. In my defense, it’s very early in the morning.

Thunderf00t: http://rationalwiki.org/wiki/Thunderf00t (His videos on science are good, but he’s a total dick)

I knew Esmay’s obsession with race would culminate in some shit like this.

So… Esmay thinks black men should beat up feminist because feminists are racist for thinking that black men are violent against women. MRA logic at its finest.

I think Esmay’s Doodlojik(TM) goes like this:
(1) Feminists are the source of all evil in the world.
(2) I don’t really understand what racism is, but people talk like it’s a bad thing.
(3) Therefore feminists must be responsible for racism.

Now I have to go put an icepack on my head to control the swelling in my sprained brain.

> And yes here’s me a straight white male telling you, Woman of Color, that you’re an Aunt Jemimah if you’re a feminist.

…because with “logic” like that, we don’t need inanity.

I just saw this screencap floating around on twitter: 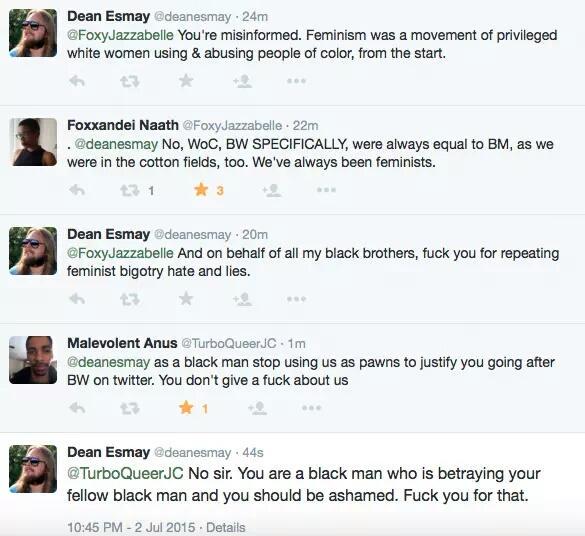 Two black MEN come out and tell Dean he’s full of shit, and he just keeps insisting that he’s right and these silly, used black men need to just listen to him to stop being traitors to their race and gender! GOSH.

Whitesplaining/Mansplaining at it’s most hilarious.

EDIT: Whoopsie. One black man and one black woman. My bad.

Pandapool -- The Species that Endangers YOU (aka Banana Jackie Cake, for those who still want to call me "Banana", "Jackie" or whatever)

Sojourner Truth and Harriet Tubman were both feminist and bell hooks is black, so, I mean…

And once again I’ll say — the anti-feminists are scared shitless that black feminists and white feminists will be able to unite against male supremacists. WHEN that happens Esmay and his ilk are toast.

On behalf of all my black brothers? Oh my. I don’t remember any black men asking Deano to speak for them.

weirwoodtreehugger | July 3, 2015 at 10:49 pm
On behalf of all my black brothers? Oh my. I don’t remember any black men asking Deano to speak for them.

And when one does stand up and say “Don’t use us to attack black women!” he just calls him a “traitor” and keeps doing it. What a dingleberry.

Hey, Dean has a fan:

Check out his other tweets to see what sort of fellow this guy is:

But feminists are the racist ones. Sure, Dean!

If I had a twitter follower whose icon, in the current climate, was a Confederate flag, then I would be deeply ashamed. That’s like having Bashir Assad tell you that he admires your essays on political theory.

One thing that I really admire about Rebecca Watson, and that contributes greatly to the respect I have for her, is the extent to which she’s willing to tell people to stop being her supporters if they hold other views which are offensive. Sadly, it appears that Esmay has neither the self-respect nor the self-discipline for this.

Or maybe he does. Let’s see if he says anything to HardCrustySocks about it. You know, on behalf of his black brothers.

Whenever I feel inclined to any warmth or compassion towards Deano (which, for some reason, I occasionally do), I shall come back to this thread. It will then go away.

Like… what in the everloving fuck? “My black brothers”? What?

“Hard crusty socks.” What is it with Internet right-wingers and naming themselves after their dicks or dick-related activities?

@SFHC: because it’s the organ that does their “thinking”.

@Grumpy: “The penis is the most important organ in your body…according to the penis.”

I love the picture at the top. D. E. looks incredibly drunk, or possibly he’s just about to give the mother of all sneezes. Either way, dignified it ain’t.

Jeebus, I do not have enough hands to adequately facepalm myself after reading this. David, I have to salute you for reading this shite day after day of your free will so we don’t have to.

Oh by the way, don’t worry about mixing up the Sad and Rabid Puppies. The Sad Puppies were more than happy enough to pat the Rabids on the back. At least until Vox Day’s umm.. rabid views were used against them.

What a waste of life. He’s repulsive in every way possible.