The incel community is the only place I know of where having a small dick gives you bragging rights. Amongst the so-called involuntary celibate, dudes can gain a certain backwards prestige by presenting themselves as the most hopeless of the bunch, the kind of guy that’s the least likely to ever score with a human female.

And what is more unattractive to a woman, these guys figure, than a guy with a tiny dick? (Don’t bother answering, ladies; these guys aren’t interested in data that doesn’t come from their own asses.)

But the incel community’s weird fetishization of smaller-than-average dicks creates problems for incels with dicks average or even slightly above average-sized. If your dick is just a regular dick, after all, that removes one big excuse for why the ladies don’t want to have anything to do with you.

The solution? Pretend that normal-sized dicks (that is, dicks in the vicinity of 5.17 inches in length, according to SCIENCE) are small dicks … compared to the huge dicks that incels are convinced most ladies see in the flesh on an almost daily basis.

Call it Incel Penis Math. Here’s an explanation, from one of the most prolific posters on the Incels.is forums:

Er, dudes, you know that unless he’s got a full-grown Robert Plant in his pants, women can’t actually tell how big a dude’s dick is before his pants come off? And only a tiny percentage of men have dicks seven inches or longer — it’s closer to 2 percent than to the 5 percent Mr. Mylifeistrash claims.

And guess what? It doesn’t even matter. The overwhelming majority of women who have sex with men are happy with their partners’ penis size, though statistically speaking roughly half of these men have penises that are smaller than average. Trans men who don’t get bottom surgery — and that’s most of them — literally have no penises at all, yet they have sex.

There haven’t been any studies on this that I know of, but I feel fairly confident that most (straight and bi) women would much rather have sex with a guy with a tiny dick (or no dick) than with the sort of guy who goes around getting mad because he thinks women only have sex with “Chads” and “Tyrones” (gotta love that incel racism) with dicks bigger than Biggus Dickus.

@Mish
I just checked out Julius Goat, who certainly knows how to dissect the right!

*woman gets assaulted*
“She should’ve been more careful.”

*school massacre*
“Students should be careful.”

*white guy gets criticized for using a slur*
“Aaah! Everyone these days has to be SO careful!”

Thanks for the recommendation.

On a more serious note, wasn’t there a discussion a while ago where some commenter pointed out that “improve your physical appearance and get out more” is only a viable strategy when you’re financially secure and in a good headspace, and thus have sufficient free time and motivation to devote to personal grooming and socializing?

I’m going to have to agree with Lukas Xavier. Some incels can’t do this. But I believe that a certain (unknown) percentage of them could. They could take the energy they now spend dissing women and turn it to something positive.

I think that for the average incel it’s more a case of them feeling that they shouldn’t have to.

Fair points, though I wasn’t referring to incels specifically with my “on a more serious note” paragraph; I just remembered that the resulting discussion (which involved non-incels in the comments section of this site) got pretty heated.

@Kat, I’m glad you like Julius! I think his very best thread is where he used being “kicked in the nuts” as an analogy for sexual assault. He wrote this not long after the Kavanaugh confirmation, if I remember rightly. The full unroll can be found here, but this is the start:
(CW for assault, obv) 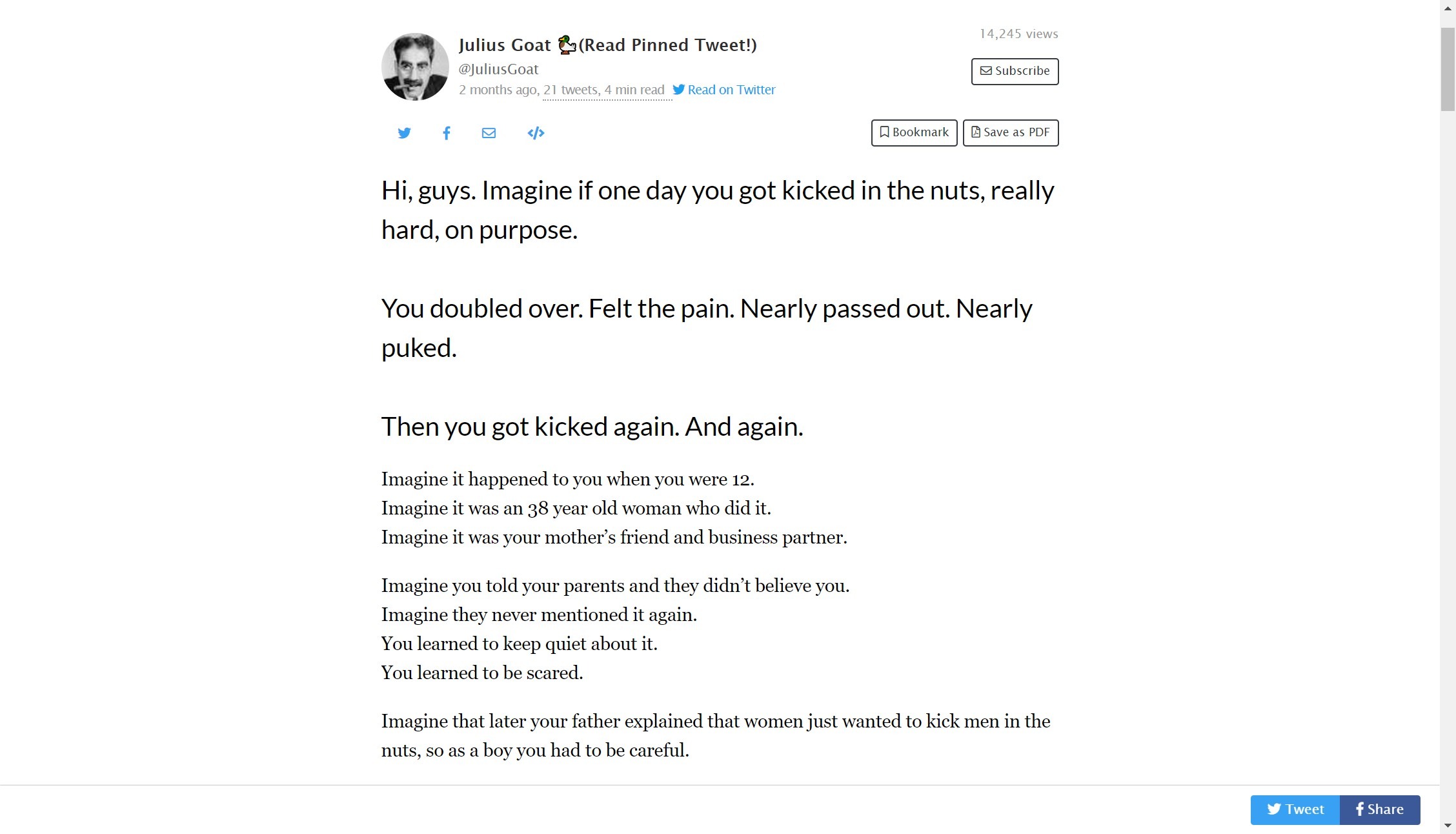 Most men have a 6 or less inch penis. This goes for white, black, Hispanic, and Asian men, and regardless of whether he is short or tall.

In my long, safe sexual history of many partners I can say a larger 7 inch+ penis is an anomaly. It doesn’t fit into any of the classifications. Sometimes a tiny white nerd will have an 8 incher. When a guy whips out a big stick I never saw it coming.

Anecdotally, bigger penises seem to be more prone to dysfunction. It requires a lot of blood to fill them up, I guess.
And a hard 5 incher beats a semi 8 inches any day. It’s all about the angle regardless.

For most women though this is a moot point. Most women can only orgasm through direct stimulation of the clitoris. Which makes all this penis envy–whether big or small– a total waste of time.
But this is the internet.

There is a South Park episode about penis math. These dudes don’t even understand that their ideas are literally a joke.

We should be aware of the important points in this article about this below average dicks. This would really mean a lot. Thanks for sharing this one out.