Hearing the news that Air Force personnel at Joint Base Andrews in Maryland were recently given a briefing on the threat posed by the incel movement — complete with slides featuring incel obsessions Becky and Stacy — some reacted with predictable jokes.

“You never know when the Air Force will need to bomb the Incel State,” author and ex-Daily Caller journalist Scott Greer joked on Twitter.

“These guys fly planes?” asked another Twitterer. “I’m concerned. You should only let smart people do that.”

So far, details on the briefing are a little scanty. According to Task & Purpose, a site reporting on military and veterans’ issues,

At least one Air Force base is on the lookout for a sinister new threat: angry men who can’t get laid.

Personnel at Joint Base Andrews in Maryland were recently treated to a threat brief regarding an “increase in nationwide activity” by self-described “incels,” members of an online subculture of “involuntary celibacy” who adopt an ideology of misogyny, mistrust of women, and violence in response to their failed attempts at romantic relationships.

The brief was first made public via a screenshot posted to the popular Air Force amn/nco/snco Facebook page on Tuesday. An Air Force spokesman confirmed the authenticity of the screenshot to Task & Purpose.

The screenshot in question showed a slide from the presentation featuring an interent-famous incel meme starring supposed female archetypes Becky and Stacey.

Obviously, the Air Force isn’t contemplating any air strikes on incel hideouts in the mountains of Afghanistan, or anywhere else.

The briefing seems to have been intended to warn about the possible dangers of incel rampages by Air Force personnel themselves, many of whom obviously have access to considerable firepower and the training necessary to know how to use these weapons in the deadliest manner.

“The intent of the brief was to educate the Joint Base Andrews commanders on the behaviors and activities attributed to the group to safeguard our Airmen/installation,” an Air Force spokesperson told Task & Purpose.

It’s a good thing that the Air Force is taking incels seriously. We can’t dismiss the real threat of incels because of the absurdity of their beliefs. Terrorists and mass killers are often motivated by beliefs that the rest of us would consider ridiculous.

Son of Sam believed his neighbor’s dog was telling him to kill. Charles Manson ordered the killings at the Tate and LaBianca homes in hope of setting off a race war that would ultimately put him in charge of the world — basing his peculiar eschatology in part on secret messages he thought were hidden in Beatles lyrics. Compared to these two — and to many other mass killers — incels seem almost rational.

As for the memes? They’re a central part both of incel and alt-right culture; they radicalize angry young men in the same way that YouTube videos and books like the neo-Nazi bible The Turner Diaries do. These days, mass killers don’t just pen manifestos; they also leave a trail of memes. The Christchurch killer included references to memes in his manifesto; the Toronto van killer, an incel, left behind a short statement on social media referencing several popular incel memes.

the screenshot [of the Air Force briefing] appeared the day after Brian Isaac Clyde, a former Army infantryman who frequently posted memes that referenced the incel movement alongside anti-government conspiracies to his Facebook page, was shot by federal officers after he opened fire outside a Dallas, Texas federal building.

It’s not clear if Clyde considered himself an incel; his social media was overstuffed with all sorts of memes popular amongst alt-rightists and manospherans and right-wing conspiracy theorists generally.

We learned a long time ago that 4chan’s racist and anti-Semitic memes weren’t just “ironic.” Nor are threats of violence any less serious if they take the form of a meme. Incels make a lot of memes. They’ve also killed a lot of people. Everyone needs to take them seriously.

If every living creature looked the same and/or only found the exact same look attractive, I dont think we would have evolved from fish lol.

“ew, that fish has, like, …legs? Dont they know fish arent attracted to that?”

The Becky is rated “average 6/10” on what I assume is Objective Female Hotness Scale going from 1 to 10, or something like that. Oddly enough, for men who make a big deal on being below-average looking, incels don’t seem much interested in postulating the properties of below-average looking women.

The incel Objective Female Hotness Scale is derived from the GamerGate-approved Objective Video Game Scale, where 7/10 is mediocre, and 6/10 means “so awful I can’t ignore it, and must complain forever”.

I remember people calling such dyes “galaxy hair” the first times I saw it, anyone else heard that term?

Not even electrolysis? I know it’s not cheap, and it can take multiple sessions.

I thought about electrolysis for myself, when I was younger and much more insecure. I decided it wasn’t worth the expense, for something I could manage on my own.

I’ve thought about electrolysis, but as a 20-year old college student who’s still basically financially dependent on my parents, it’s not really a realistic option right now. I’m also kinda afraid I’ll have it done and then my mind will change when I’m older and I’ll want facial hair again. When I first started growing it in middle school, I was all excited to have a little facial hair, but now I’m tired of looking 40+ at only 20.

Re: the insanity plea, right and wrong actually have nothing to do with it nowadays. A crime is composed of three elements: mens rea (guilty mind), actus reus (guilty act), and concurrence of the two. For most crimes, without one of those elements, you don’t have a crime (strict liability crimes like speeding don’t require mens rea, but they’re the exception to the rule.) A modern insanity defense relies on proving that the defendant had no mens rea – essentially, they committed the act, but lacked the intent necessary to have technically committed a crime. Obviously, this is a very difficult thing to prove, so contrary to pop cultural portrayals, insanity defenses are actually very rare and it’s even rarer for them to actually be successful.

@kupo
Huh, how fun to know, I never knew those terms!

Re: The law and insanity pleas etc.

I wrote a very brief summary about the English perspective a while back. If I’ve got the link right (probably not) it’s here in the unlikely event anyone is interested:

Years back, when I finally was granted permission to grow a beard, I invested in electrolysis – but just on the areas I knew I’d never want the beard to grow.
Best investment I ever made. Cut down the whole shaving and maintenance thing by about 90%.

I know it sounds frivolous, but I was also thinking of laser hair removal for time reasons.

How much does it cost to do that to your legs – around 1k? (Plus I hear it takes several appointments.) I’m not rolling in cash, so…maybe I won’t.

It’s just that I’m trying to write and maintain a job (I can’t support myself just by writing yet, and if I tried it full-time, I’m afraid I wouldn’t be able to focus). I only shave my legs in the summer, but doing so every second day just takes a long time (armpits are small, so less of a bother). If I waste time, I’d rather waste time doing something fun.

Again, this seems silly. There’s no logical reason why I can’t have hairy legs! It’s just that I’m afraid of being seen as messy. Not unfeminine, just unorganized. Now, there’s nothing inherently unorganized about it, but I’m oversensitive about being seen as disorganized, what with my ADHD and anxiety.

Clearly, the only logical solution is to genetically engineer humans – specifically, those living in places with cold winters and hot summers – to grow leg hair in the winter and shed it in the spring. Like, thick hair. None of this wimpy wispy stuff. 😛

I’m sorry for being incredibly pedantic, but there was a lot of evidence the “The Son of Sam” made up the getting orders from the dog thing because he knew it was a sensational detail cans he enjoyed that type of attention.
Also the motivation for the Manson murders have recently come into question, at least based of this Jezebel article https://www.google.com/amp/s/jezebel.com/what-you-think-you-know-about-the-manson-family-murders-1835688049/amp
To be clear I agree with all the points in the article, I’m just grumpy at work and thought I’d add a maybe not so helpful addition to the discussion

@kupo:
Joining the choir 2 say how awesome your hair is in that pic. I have 2 friends who’d completely want 2 rock that look.

I probably would too, but I have neither the patience nor the pocketbook (+ my job frowns on “hair color not found in nature”–even though I don’t work with or get seen by the public). 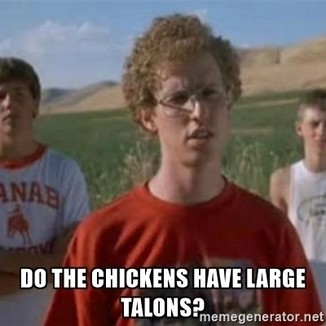 Cassowaries are totally dinosaurs. A cassowary killed a man in Florida not long ago. So, maybe they don’t disembowel people, but they definitely can stab us to death with their foot-knives.