Incels have rather, er, romanticized ideas about sexual abuse. They’re so fixated on the idea that having sex will fix all of their problems that they sometimes fantasize publicly about how great it would have been if their mothers, or sisters, or cousins had molested them when they were young. And sometimes they even get angry that they weren’t abused.

Take, for example, this lovely Incels.co poster, who seems to think that the root of all of his problems is that his then-17-year-old cousin refused to have sex with him when he was a lad of 13. Which would not only have been a violation of the incest taboo, but rape.

This post was so appalling that it ended up getting reposted on the Incel Tears subreddit, a hangout for people to share the horrifying things they find on assorted incel forums.

Naturally, the regulars on Incels.co discovered that this post had made it to Incel Tears, and one of them complained that the people there “never show our reaction. They obviously love cherrypicking us to push a false narrative.”

So let me remedy that.

Yes, there were a number of Incels.co commenters who were repulsed by the idea of someone having sex with their cousin. Like, for example, this person:

But I would be remiss if I didn’t also post some of the other responses.

Wizardcel’s response to this: “I regret not having raped her.”

And then there was this weird racist response:

I should point out that none of the commenters — whether pro or con on the incest question — seemed to have noticed, much less cared, that Mr. Wizardcel was also glorifying the sexual abuse of a 13-year-old.

For incels, it seems, sex is sex — and sexual abuse is also sex.

When I was about 6, I had a wicked crush on a girl in church summer camp… she was probably 16, so that would’ve been… awkward.

Later, as a mid-teen, I developed one for EmmyLou Harris. She could’ve helped ME a lot, guitar lesson, or even just a few tips! But, NO, she went on to build a stellar career, leaving me to struggle… like she didn’t even KNOW me (she didn’t.)

Wow, this dude is still bitter he wasn’t abused when he is 30 years old. He’s fixated on it over half his life. I guarantee he’s the relative that isn’t invited to any of his family’s functions because he’s too creepy and they have a bad feeling about him.

I had a crush on my romanticized version of the Marquis de Lafayette when I was maybe 12. Would it have been SO hard for him to resurrect and help a girl out? Geez, some zombies.

This reminds me of when I was 20 and my family and I went to Puerto Rico and there was a 6yo boy who had the 6yo equivalent of a crush on me. Of course, I doubt he was thinking about wanting to have sex with me

When I was twelve I was really obsessed with Peter O’Toole, who played a Roman general in the TV miniseries Masada. He didn’t do anything about this and left me to grow up bitter and alone. (Until the ripe age of 15 when I had my first boyfriend.) Shame on you, Peter!

I noticed some of the commenters were from banned accounts. How to you get ban from an Incel forum? I suppose you could be nice or not have mountain of psycho-sexual problems, but that doesn’t seem to be their case. Is there such a thing as too repulsive even for Incels?

To be fair in a lot of cultures having sex with a cousin wouldn’t be seen as odd. In fact cousin marriage is legal in much of the United States.
https://en.wikipedia.org/wiki/Cousin_marriage

Yes, but even that’s a far cry from being pissed that your cousin didn’t engage in statutory rape with you at your request. Plus, while cousin marriage is legal in about half the states in the US, that doesn’t mean it’s something that one might want to be known for.

While I’m not inclined to dwell long on the nitty-gritty of cultural relativism due to lack of expertise, I get the feeling that this person probably didn’t come from one of the cultures where such relationships are the norm.

So the big life goal of this guy is to become Cletus from the Simpsons?
https://youtu.be/8N_to-EIgRw

Anonymous, I thought “Sex with underage kids is a giant no!” is one of those “It goes without saying.” kind of things.

One of my mother’s cousins ended up marrying her first cousin but it was a case of them meeting each other for the first time in their late teens (he had grown up in the UK and his family had never been back to Ireland in the interim) so they were strangers to one another for all intents and purposes; it wasn’t like they were, “I’m gonna hook up with my cousin because that sounds like a plan”. They still had to get a dispensation from the Church to marry because of the rules on consanguinity, though, and the family were pretty scandalized at the time…

He was 13. He is now a perpetual adolescent. Instead of wasting all those years in sexual fantasy and frustration, he should have GROWN UP at the appropriate time in his life, then maybe he would have HAD a life. Hey, I get it, sex is nice. But when you think it’s the only thing to strive for, you are destined for disappointment.

My response is much like Dennis’ and Dee’s when their friend Mac is upset that he wasn’t molested. 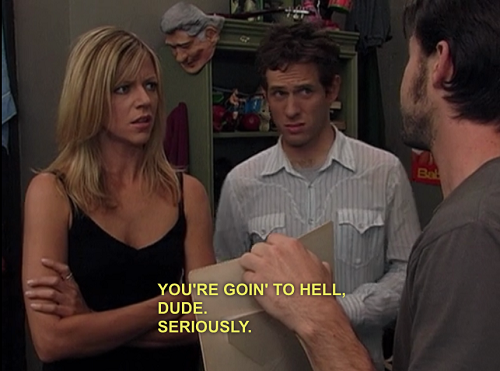 I get the fixation that X will solve all your problems.

I tend to fall into that mindset when depressed.

That it isn’t healthy goes without saying.

These dudes desperately need therapy. Right now they’re all ticking time bombs. And therapy is the only thing with a snowball’s chance in hell of defusing them…

So, it never occurred to this creepy asshat that maybe his cousin didn’t want to have sex with him because, she’s, you know, his cousin, and also because he’s creepy.
As far as his being ugly goes, I don’t know what he looks like, but his personality is certainly foul. I hope no-one has sex with him ever. The world would be a better place.
I also hope his cousin doesn’t let him anywhere near her child.

Umm yeah what Sly Fawkes said, and also did anyone else notice his forum title?! This guy is a fucking pedo.

Only Sly Fawkes mentioned it so far, but what really stood out to me from that (tells you how jaded I am when it comes to Incels…), was the way he mentioned the handicapped child of his cousin.
He’s basically putting a claim on the kid and yet he has nothing but solid contempt for them. Like, the child is just another vector of attack against the mother.
That’s the more disgusting part to me… even though the statutory rape part is a close second

Still not as disturbing as the OG incel who tried to get his mother to do him.

In OT news (but not OT for the site):

Milo has supposedly been picked as grand marshal for the straight pride parade.

Stuck a supposedly in there because, while I absolutely do not doubt it, I have no idea if he’s consented to it – Brad Pitt (their previous) certainly didn’t.

Heh. I worked for a sandwich shop for awhile when I was 21 years old. A 12 or 13 year old boy in the neighborhood liked to hang out there. I occasionally ‘gave’ him fresh-baked cookies – meaning, I purchased them for him, but didn’t let him know about it, just handed him a cookie now and then.

Eventually, he began to help my stepfather rake leaves, and perform other chores around our lot. You guessed it – he had a crush on me, that older woman who led him on with fresh-from-the-oven chocolate chip cookies.

The thing is, I was totally oblivious to this, until my stepfather told me about it. I wonder if it did the boy any lasting psychological damage.

I read the title of this blog post and I was like….What the actual Fuck
?

However, having read the posts he never said nor insinuated he was “bitter for not being abused”. He’s mad his older cousin didn’t fuck him when he was 13 and she was 17.

These guys need therapy. And it sucks a lot of therapists don’t take them seriously until it’s too late.

This is literally a South Park episode: