By now you’ve all seen endless variations on the Chad vs. Virgin meme, and probably a few featuring Stacy and Becky as well. Most of them, like the originals, tend to be more depressing than funny, reflecting the spread of toxic incel ideology into the “normie” world.

But yesterday on Twitter I ran across some fanart that flipped the script on both of these memes and ended up actually sort of heartwarming.

Happy endings for everyone — though not quite as the makers of the original memes imagined. It’s as if the wannabe swinging couples in 1969’s Bob & Carol & Ted & Alice had decided to skip the Bob & Alice & Ted & Carol stage and try a little Bob & Ted & Carol & Alice instead.

Several hours later another Pride-ified Chad & Virgin & Stacy & Becky meme popped up on my Twtter, combining Chad and Virgin from the original meme with a reworked Stacy and Becky from @Hatie_Kunt.

(This is the pic I turned into my graphic above, BTW.)

As it turns out, people have been shipping each of these couples for awhile now. After a little poking around I found an entire subreddit (albeit a teensy weensy one with only eight posts total) devoted to celebrating the blossoming friendship and/or love of Chad and Virgin, who may not actually be a virgin any more. (Click on the images to see sources.)

This meme-ist imagined the two as happy parents:

Outside the subreddit, which isn’t exactly the most active place on Reddit, I found even more. Here’s another one designed to tug at the heartstrings:

But my favorite has to be this one with the pregnant Chad:

I didn’t find as many romantic Becky and Stacy memes. But here’s one memorable one I ran across from @allygnnn on Twitter.

And here’s yet another variation, featuring a girl Chad and a sort of Beckified Virgin that I found on Reddit:

I also found an older meme featuring a remarkably similar couple, based on a bit of Tumblr art by someone called Beekkake, contrasting her slightly nerdy self with Stacy-esque “other girls.”

Naturally, other Tumblrites wondered: But what if they were to kiss? And Creamsicle was born, the name a nod to the contrast between the orange skin of the “other girl” and the pale white of “me.”

The art ranges from the cute:

… to the (somewhat) raunchy.

You can find countless more on Fuck Yeah Creamsicle.

And while Creamsicle is kind of an old meme now, one artist brought the two back for this little masterpiece:

Regarding the first issue, I would think it depends on whether:

A) Your Equality Act recognizes creed as a protected ground; and

B) If so, does that protection extend to non-spiritual matters.

I would imagine that if the answers are yes and yes, then ethical veganism should be a protected ground.

We have a similar case in Ontario at the moment regarding an ethical vegan firefighter who was denied compliant meals while deployed out of province.

That being said, and assuming the Equality Act is similar to our OHRA, I would guess that it may be difficult to establish that an employer’s choice of investments can amount to discrimination?

Looks like a queue at the library to me. I’m glad public institutions such as these are still so busy xD

That Creamsicle tumblr is awesome! There’s even cosplay!! Also, way to get late to the party, Luzbelitx!

Here are my two favorites: 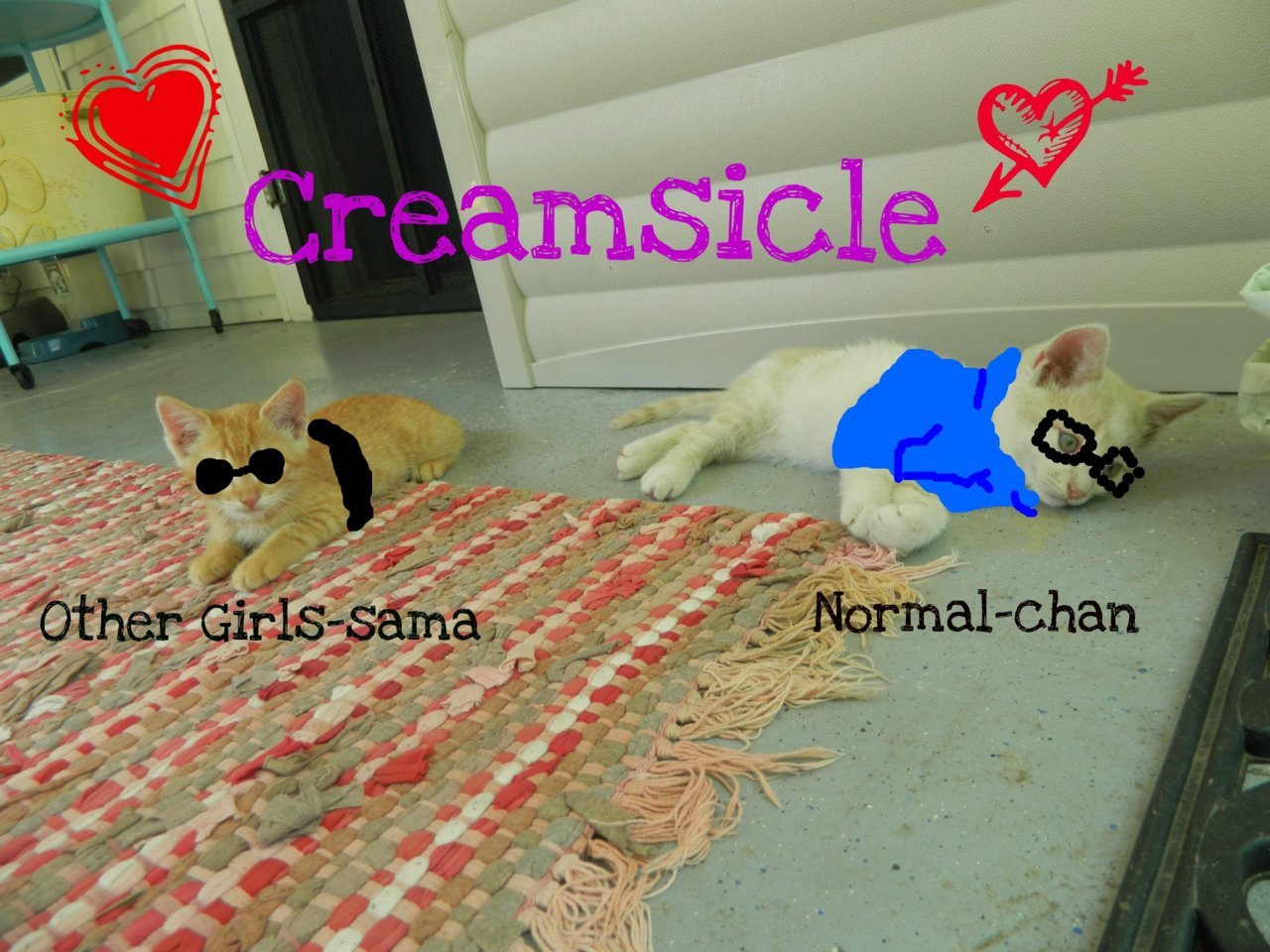 “so, a blonde and a brunette walk into a bar -”

Naturally, other Tumblrites wondered: But what if they were to kiss?

TBF, this is how 90% of the content on Tumblr comes into existence to begin with.

As well as protection based on religion, or lack of (a particular) religion; the Act explicitly protects ‘beliefs’.

To be protected a belief must satisfy a five part test:

The belief must be genuinely held,

Must be a belief and not an opinion based on present available information .

Have regards to a weighty or substantial aspect of human life and behaviour,

Have a level of cogency, seriousness, cohesion and importance

Be worthy of respect in a democratic society as well as being not incompatible with human dignity or conflict with others’ rights.

Ethical veganism, as opposed to health based veganism, almost certainly passes the test.

The Defendant has conceded that; but, because of the wider public interest element, the tribunal wants to have a preliminary hearing on the issue.

A belief in the sanctity of animal life passed the test (can’t be sacked for hunt-sabbing); so we should be ok here.

Then there’s to be another hearing on the PIDA point.

Begging your pardon; but what is “hunt-sabbing” a typo of? I can’t immediately think of any plausible candidate except “hunt-stabbing”, which doesn’t sound like it would be consistent with “a belief in the sanctity of animal life”, so I conclude that you actually meant to type something different from that as well.

@Surplus
It’s not a typo of anything. But you could have found that out yourself with a quick (and free!) web search. 😉

RE: the Stacy turning into Becky cartoon. Arghh!, here we go again with the blondes-can’t-be-intellectual trope. That is wrong on SO many levels (only one of them being that my very intellectual partner happens to have long blonde hair).

As for the cartoon itself, the woman second from the left (where she sees the book on the ground and bends down to take a look) actually kind of looks like Ms. Pavlov’s House (whose attention, if she was walking long, would definitely be drawn to any book in her range of vision) … except for Ms. Pavlov’s House that there would be an exasperated statement “why is this important book on ground; someone does not know books should be respected. Look at this, this is copy of [insert title of book], someone probably needs this…my darling, if this is a library book we should return it right away. What is wrong with people?”

And oh yes, good to see everyone. Had to be a away for a while.

(and thank you Kupo!)

ETA: Not every sab is a member of, or associated with, the HSA of course; but the site gives a nice overview of sabbing in general.

Just taking a moment 2 say how much I *really* like the girl Chad & Beckified (sp?) Virgin. That one could *so* be my partner & me–except I’m not quite that nerdy (though I am a bookworm), she’s black-haired.

I also find the one of Chad giving the Virgin a piggyback ride extra sweet.

On a slightly OT note, does it say something odd about me that I just realized my anniversary w/my partner lands in Pride month??

Sorry, last part of the 1st sentence should read “and she’s black-haired.”

I know, somewhat OCD on my part, but, as I’ve said elsewhere, I’ve got nuns in my head–& sometimes they won’t shut up!

I agree with Alan that Ethical veganism certainly passes the tests for a protected belief. Actually I would go as far as to say that to lay claim to the vegan identity means you should be doing it from an ethical rather than health reasons. It’s a matter of some debate that vegans who are doing it solely for dietary reasons aren’t actually vegans at all, they are “plant based” (incendentally those tend to he the ones who crash and burn out of the diet after treating it like a fad diet and run off chasing the next one, the “carnivore” diet where only animal flesh and offal is consumed is currently popular sadly).

reminds me of that transphobic meme where a “transtrender” was contrasted with a more accepted (by that meme maker anyway, stereotyped as “doesnt flaunt it” or w/e) masculine trans man, and trans people quickly shipped them as a couple who accepts & supports each other as all trans people are valid. (Sky & Damien if you want to look for it.)