It’s amazing how many men think their sperm is magical. Some, echoing the incorrect beliefs of scientists from centuries ago, think that it’s what “brings life” to the womb, with women providing no more than a place for a fetus to hang out for 9 months before it’s born. Some think their own sperm is worth its weight in gold.

Here’s a truly amazing example of this particular brand of sperm theory, in the form of a now-vanished Tumblr post from a few years ago that has been passed around incredulously ever since then. (I recently found it on the BadWomensAnatomy subreddit; it’s also been posted to the comments here before.)

In this post, someone called afrovegan suggests that women exposed to a particular man’s sperm over a long period of time will, well, start to turn into that man on a genetic level.

Ever see a couple that’s been together for a while and they look the same ? They could be different races but still have a strong resemblance like family ? Here’s why . During sex when a man ejaculates . His sperm or DNA is uploaded . And a female downloads it in the form of love .

The more she opens up to him and her defenses fall the more data she’s able to download. So in reality fellas we are the ones giving BRAIN .

I’m not sure that woman are really lining up to, er, “download” this dude’s BRAIN sperm.

How? Sperm has cerebral spinal fluid . Or (Brain,Spine,Fluid) . It starts in the brain then is sent down the spine and turned into fluid. When women download the data it’s not just kids in the sperm . It’s your thoughts and feelings as well.

Damn, I guess I missed this day in biology class.

That’s also how women have this Connection to the men they have been with for a while . She doesn’t have to be with you or around you, and could call you as another woman is thinking about approaching you Or can tell when something isn’t right . They call it an intuition . But It’s a mental connection .

The woman basically becomes a mini version of the man by taking take on personality traits as well . That’s why it’s important for females to choose their partner carefully .

For example, if a dude talks endlessly about his sperm and its magical powers, you should probably run away as fast as you can. Though I suspect most women will have intuited this already, no Sperm Brain Spine Fluid downloading necessary.

Wow, it is not women he is speaking about, it is more like if his fembot fantasy has come to synthetical life…
Or maybe he had lost many of his “brain spine fluid” recently, inducing a shortage of reasoning and reasonableness in his argumentation… Wait, no, this could be a NoFapper argument…

@Mish
No, no, down my street. The one in San Francisco. I’ll let you know if I see any of your socks there.

Silly me. Thanks for keeping an eye out – my socks are mostly black and some have cats on them. You’re a lifesaver xx

Maybe socks have an urge to return to where they spawned; like salmon?

Thought everyone knew of the life cycle of socks!

After the socks are purchased, they pick up life essence from being worn. Depending on the energy of the wearer/donor, eventually the pair will achieve completion.

On addition of water and soap, the socks rub together, one passing all it’s collected life essence to it’s partner in a noble act of self sacrifice, leaving it spent, with slack elastic and possibly holes.

The fully energised sock, using the power of the spin cycle as a booster, opens a small dimensional portal, warps to a convenient wardrobe, and uses the last of the life essence to transform into a coat hanger, thus completing the cycle of Domesticos.

ETA: It has been pointed out to me that some socks – usually Argyle ones – do NOT become coathangers. They become plastic lids that fit no known container. This is a mutation.

I owe you so much for this, my friend. At long last, I have found peace.

I, too, am a fan of the Random Capitalized Word, but did you ever consider that this Connection is neither telepathy nor intuition but is actually just the result of two people knowing each other well?

Good theory but there’s a hole in it. You see, it doesn’t explain why it’s only women who can be expected to become attuned to their partners.

If your explanation was true, the connections would mostly be symmetric and the men would understand the women as well as the women understand the men. Whereas if this guy is right, what we would predict fits his observations perfectly, AND we’ve also explained why it’s natural and inevitable that it should be the woman’s job to make a hetero relationship work. Powerful!

I thought odd socks formed a substantial part of the dark matter in the universe, no?

There is a formula to calculate the probability of sock loss:

L = laundry size (p = number of people in household x frequency of wash per week)
C = laundry complexity (t = how many types of wash done in a week, eg whites vs darks x s = number of socks being washed)
P = positivity towards laundry: how much a person likes or dislikes washing clothes
A = attention paid to loading the machine: going through pockets, turning clothes the right way out, unrolling socks, etc. versus dumping everything in and belatedly discovering your kid had 50 acorns squirreled away in a cargo pant pocket. (Er, hypothetically speaking. For a friend.)

Not sure if this’ll link, but if there’s a socks conversation going on, Hugh Laurie has the final word: 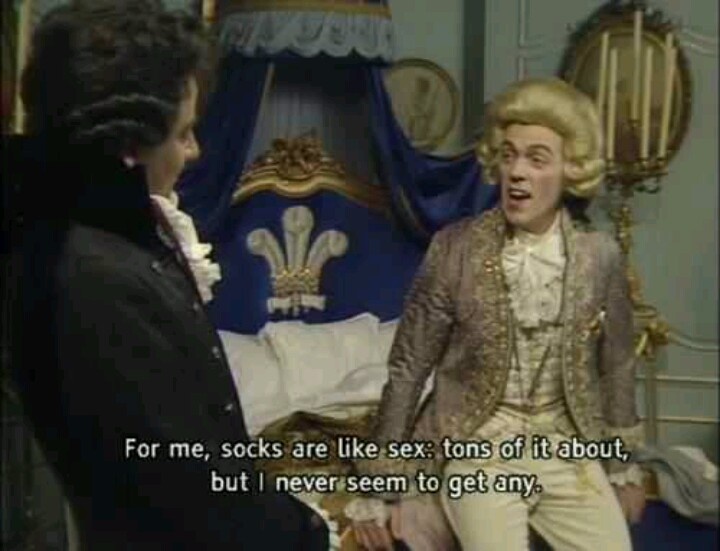 Well, this guy didn’t think his sperm was magical so much as medical…

I’ve been reading a lot of old anti-masturbation literature recently (it’s hilarious!) and I think Tissot, about 1820 or so, repeated the BS about sperm being cerebrospinal fluid because there are so many nerves in the scrotal area.

Which still begs the question of why someone in the 21st Century should believe it, but I found out in my research that NoFap has gotten ahold of Tissot and the other old texts on “onanism” and its dangers and are believing every bit of it.