A big round of applause for two websites that have featured here on We Hunted the Mammoth from the beginning: A Voice for Men and Return of Kings have both been officially recognized by the Southern Poverty Law Center as hate groups.

The hate-monitoring group announced the news in its latest “Year in Hate” report yesterday. “[F]or the first time,” the report declared,

the SPLC added two male supremacy groups to the hate group list: A Voice for Men, based in Houston, and Return of Kings, based in Washington, D.C. The vilification of women by these groups makes them no different than other groups that demean entire populations, such as the LGBT community, Muslims or Jews, based on their inherent characteristics.

Both groups have more than earned this long-overdue designation. If you need to be reminded just how, take a stroll through the archives here for literally hundreds of examples of hateful rhetoric and actions by both AVFM and RoK, and/or their respective founders, Paul Elam and Roosh V.

You may also notice, in your stroll through the archives, that both AVFM and (especially) RoK have embraced some of the most noxious views of the racist alt-right directly. Indeed, one of the most notorious participants in the racist Charlottesville march last year — a man jailed for his assault on a counterprotester — was a former contributor to AVFM.

Elam’s response so far to his recognition as a hatemonger by the SPLC has actually been somewhat tame, at least by his standards.

He also retweeted this lovely sentiment from someone whose Twitter handle is a not-very-subtle reference to the c-word.

This dude was even more pissed:

Roosh’s response to his inclusion on the list was a bit, shall we say, ironic as well:

Thanks for proving the SPLC’s point, guys!

The SPLC report also notes a number of other discomfiting facts, starting with this one:

The SPLC’s Year in Hate and Extremism report identifies 954 hate groups – an increase of 4 percent from 2016.

Some of this increase, the report says, was due to a resurgence of fringe black nationalist groups — which the SPLC is quick to distinguish from “activist groups such as Black Lives Matter and others that work for civil rights and to eliminate systemic racism.”

But the real danger comes from the racist right.

[B]lack nationalist groups lagged far behind the more than 600 hate groups that adhere to some form of white supremacist ideology – and they have virtually no supporters or influence in mainstream politics, much less in the White House.

Within the white supremacist movement, neo-Nazi groups saw the greatest growth – from 99 groups to 121. Anti-Muslim groups rose for a third straight year. They increased from 101 chapters to 114 in 2017 – growth that comes after the groups tripled in number a year earlier.

Ku Klux Klan groups, meanwhile, fell from 130 groups to 72. The decline is a clear indication that the new generation of white suprem­acists is rejecting the Klan’s hoods and robes for the hipper image of the more loosely organized alt-right movement.

The overall number of hate groups likely understates the real level of hate in America, because a growing number of extremists, particularly those who identify with the alt-right, operate mainly online and may not be formally affiliated with a hate group.

These groups not only spew hatred; they have helped to spur a frightening rise in racist violence — and murder.

A separate SPLC investigation, released earlier this month, found that 43 people were killed and 67 wounded by young men associated with the alt-right over the past four years. Seventeen of the deaths came in 2017.

So AVFM and RoK are in some pretty shitty company here.

No surprise that Paul takes this designation as a badge of honor, and presumably a fundraising opportunity.

I distinctly don’t remember being catapulted forward on the corpses of men and boys… I think I’d remember something like that.

Its funny really, this strange idea he has that all the men and boys who die in war were somehow doing it for the furtherance of womankind… that must be why they dropped all those bombs on cities.

Yes, I notice both of these guys are really into selling their “advice” to other angry men. So they are not just hate groups, they are scams as well. To bad the BBB won’t go after them too.

“How dare you accuse us of being hate groups?! We’ll shoot you!” LOGIC.

Finally the obvious is stated. Oh and what lovely twitter comments to show off their benevolence /s

So, that rule about every time a dude tries to mansplain why feminism is dumb, they prove feminism is necessary ?

Someone less medicated than me needs to come up with the corollary we’re seeing at work here.

I’m not happy with how misogyny doesn’t ever seem to count as hate on the same level as other types of bigotry even though it is so pervasive. So this is a good baby step in the right direction.

Police forces here are starting to wise up.

Couldn’t have happened to a more deserving group of people. *coughs*

Yeah, the one unhinged “how dare you accuse me of hate? you deserve to DIE” guy was a little scary.

I always picture guys like that posting/tweeting with flecks of spittle in the corners of their mouths, snarling and grimacing at their imaginary enemies.

If stress is as bad for us as doctors say, I can’t imagine why these guys aren’t falling out like flies.

At any rate: it’s good to have them listed as hate groups. Now let’s work on making guns harder for them to get.

Roosh says the Jews are coming after him again. How long before he starts posting pictures of swastikas and anti-Semitic caricatures on his Twitter feed? 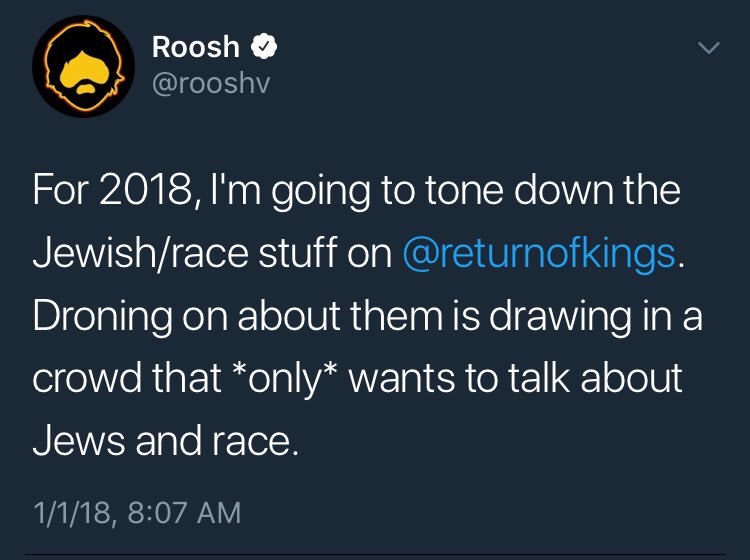 About time some of these groups got pegged up for what they are–and the same for the folks in ’em. People are people, and people who won’t recognize people of different sorts as people aren’t really doing much for anyone but the ones in power.

Side news: threw chicken, grape tomatoes, garlic, and onions into the Instant Pot. I have the makings of something good.

So he’s saying that yes, AVfM is a hate group, but so is the SPLC? Setting aside the fatshaming, I’m not sure he actually understands how the “pot-kettle” comparison works.

“The SPLC is an extreme far-left organization who target Conservatives! They spread more hate than they track! It’s run by a bunch of Jews! Yada yada yada yada!” ad nauseum.

I think a lot of Alt Rights think of SPLC as a “hate group,” just like they think BLM is a “terrorist” organization.

Victorious Parasol | February 21, 2018 at 3:18 pm
No surprise that Paul takes this designation as a badge of honor, and presumably a fundraising opportunity.

Nothin’ more lucrative than martyrdom. It worked for that Jesus guy!

Tosca; Chaos made Flesh, Servant of the Purring Jew

So, that rule about every time a dude tries to mansplain why feminism is dumb, they prove feminism is necessary ?

You’re thinking of Lewis’s Law, “The comments on any article about feminism, justify feminism”.

So in this case: “The reaction to your group being designated a Hate Group, prove the SLPC is correct to designate it a Hate Group”.

Women are being forced, pushed, launched, catapulted & carried forward on the corpses of men & boys

Yeah, I don’t remember being catapulted forward either. Good catch.

As for the forcing, pushing, launching, and being carried forward on the corpses of men & boys, I’m drawing a blank there too. I’m pretty sure the smell alone would be extremely memorable.

This is sort of related, insofar as it involves far-right people yelling about censorship: Twitter recently did a massive “bot purge”; many accounts have lost followers, and/or have had to re-verify.
Of course this is “left censorship”. I just spent 10 minutes scrolling through the #TwitterLockOut hashtag and it’s hilarious:

When you think a private company is America (ohmygod these ones are endless): 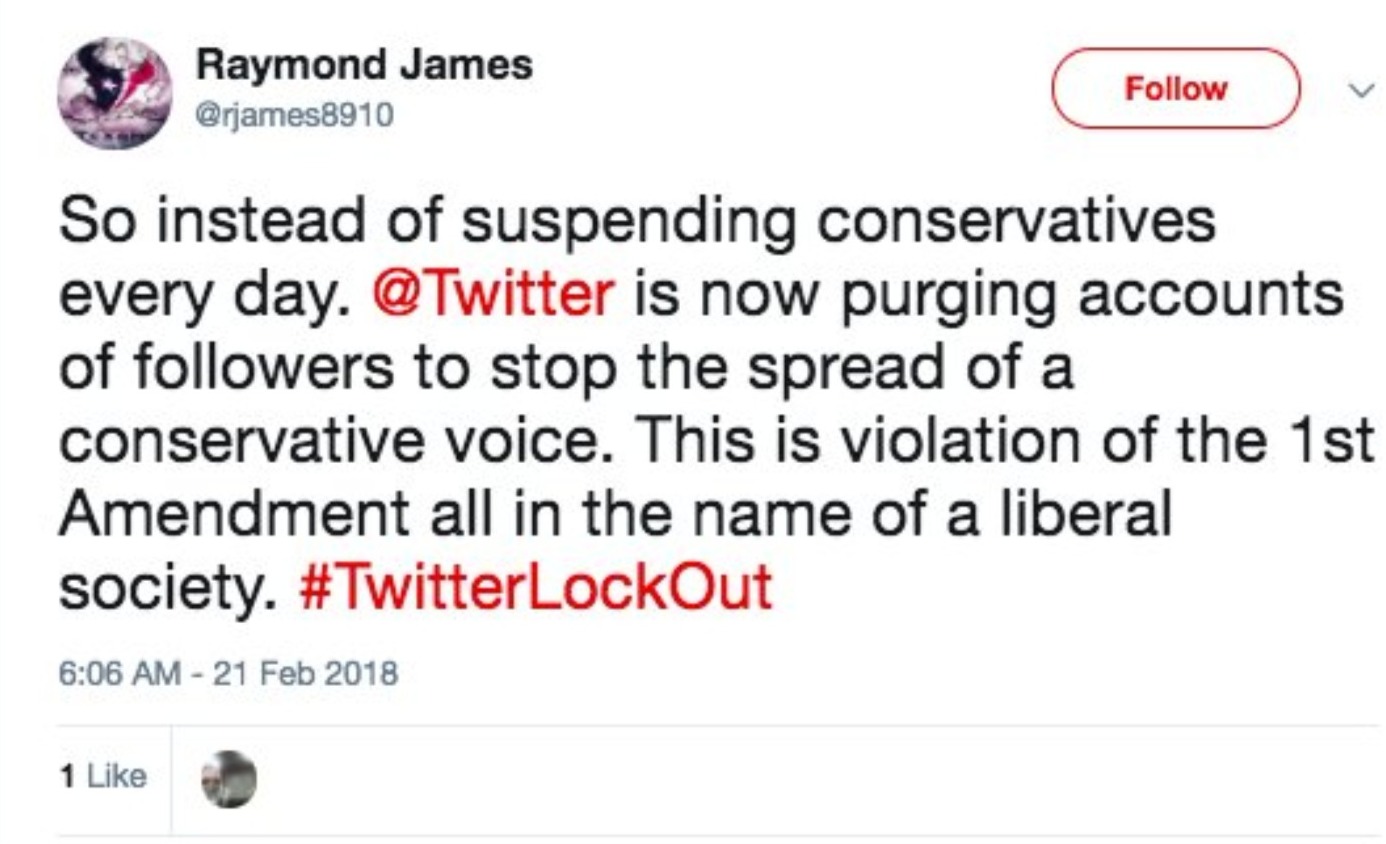 When you want to feel special: 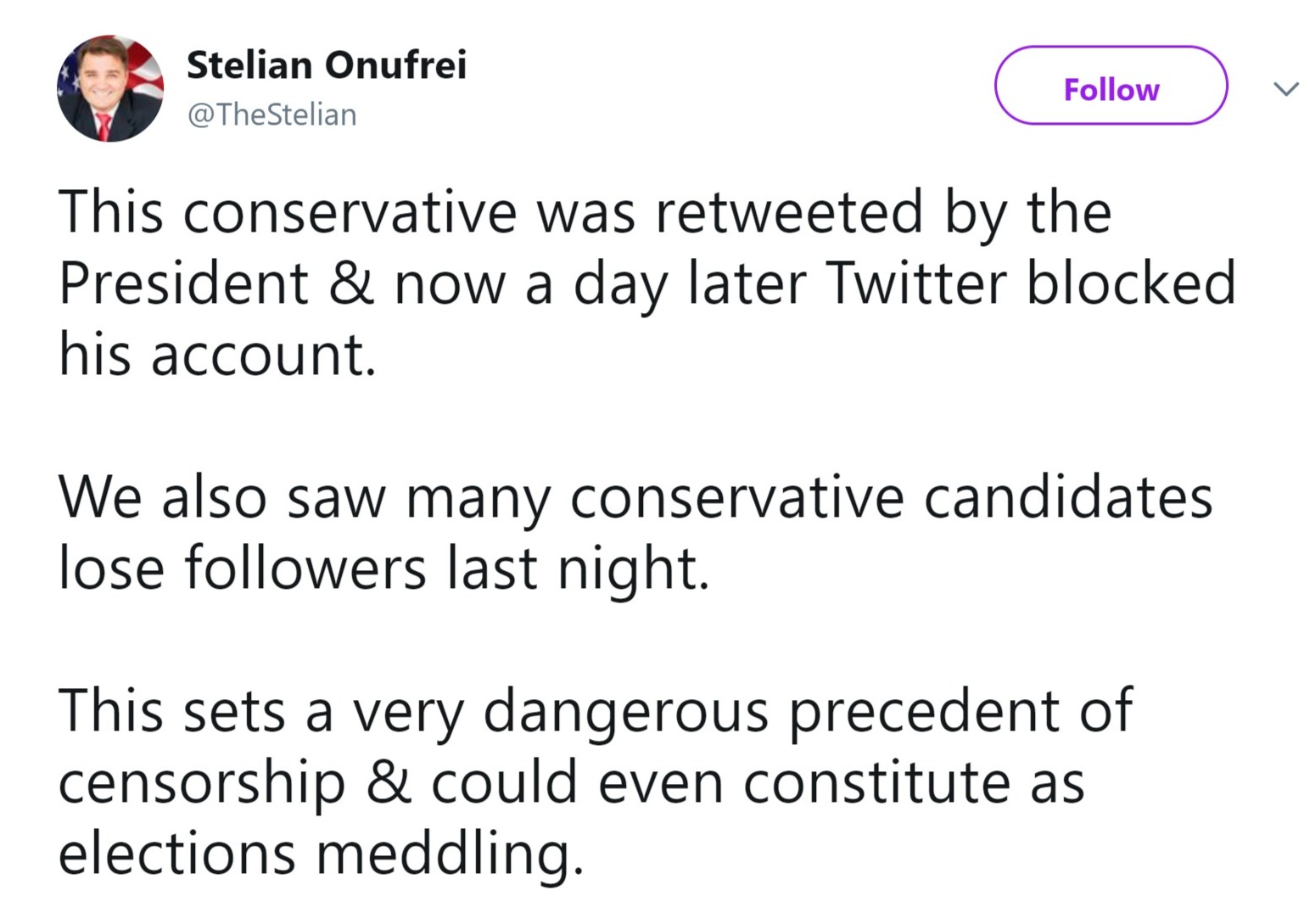 So… it’s election meddling to ban bots created specifically to meddle in politics and elections?

I honestly can’t tell if Krunt Fruckers use of “Nazi hate Propaganda” is accusing the Southern Poverty Center of being like the Nazi’s or is just anger about them being against the Nazi’s.