As Donald Trump descends ever further into the maelstrom of his own id, the rhetoric of his most devoted fans grows ever wilder.

On the blog of the rabidly racist pickup artist James “Heartiste” Weidmann — you may recall his recent attacks on Paul Ryan — one of the regular commenters has a rather creative new theory about Hillary: She’s deliberately trying to start a war with Russia because she wants to kill off as many young American men as possible.

In a comment on Heartiste’s blog, someone calling himself Days of Broken Arrows lays out the twisted logic of this hypothesis:

Hillary wants to send your sons off to war so your daughters will get their jobs. It’s a deliberate attempt to kill off large segments of the male population.

Maybe it’s conscious on her part; maybe it’s unconscious, but the end result is that lots of men will be pulled from the labor force making way for women. I’m surprised no one else has picked up on this. To me it perfectly explains why she’d be gunning for a war with Russia before she’s even in office. Has she been pushing for a female draft? No. Therefore, a large-scale war would be the ultimate “full employment” program for women.

The final solution for feminists, so to speak.

Apparently the “alt” in “alt right” is short for “alternate reality.”

Instead of dismissing Mr. Broken Arrows’ theory as possibly the most ludicrous thing anyone has ever said about Hillary (except for those who think she is literally a reptilian space alien who feeds on human blood), Heartiste has chosen to highlight the comment, and more or less endorse its “logic,” in a post of his own.

“thec*nt has been saber rattling for war with Russia,” he writes, using his favorite nickname for Hillary.

I wish that was hyperbole. She is an insane evil witch who hates Putin for whatever godforsaken neocon reason and would work hard to thrust America into a land war in Asia, her finger shaking with Parkinson’s as it dangled over the nuke button.

It couldn’t be that Hillary is critical of Putin because he, you know, invades his neighbors, murders civilians in Syria, and is using hackers to try to influence our elections. Naw, it has to be something else. Like a desire to kill men.

I’ve been saying from the beginning that thec*nt is a man-hating dyke. Literally. She hates men and she eats p***y. This is why she was so quick to forgive Bill’s affairs; she didn’t give a shit. Her heart was with other women. This is also why Trump’s unapologetic alpha male masculinity enrages her. She has a visceral hatred of men, and especially of men who act and look like men. It’s no wonder her campaign is filled with bitterbitch cat ladies, gay men, and effete nümales. Not a drop of testosterone between them to offend thec*nt.

“Days of Broken Arrows is on to something there,” WereallPalestinians now writes.

While I think there are many angles at play here, this is an important one. Its also one that the opposition can quickly point at and cry “Conspiracy kooks”. …

The (((Elite))) are getting nervous and pulling out all the stops. But the Trumpening has a slowly waking populace on its side.

The ironically named A Wise Man also seconds Broken Arrows’ theory — and adds another one of his own (which, as silly as it is, at least makes a teensy bit more sense than the “kill men give jobs to women” theory).

I’ve been saying for months that the C*nt wants to start WWIII with Russia. Not only for the reasons mentioned in this article, but also because of her paranoid belief that Russia is behind the wikileaks dump. Don’t doubt for a moment that this bitch isn’t petty and vindictive enough to drag us into a war to end all wars over what she perceives as a personal slight.

A commenter calling himself GB somehow manages to say nothing about Broken Arrows’ theory while using the word “cuck” as many times as possible. Accusing the GOP establishment of wanting Trump to lose, he notes that he

[j]ust got an email survey from GOPe, asking if I was voting Trump, yes. And if I was voting GOPe downticket, nope. Cucks are catching on that it ain’t their country anymore. Don’t be fooled they can’t be converted, backstabbing cucks forever. I think the GOPe dream is a c*nton presidency with both houses being GOPe cucklicans.

I don’t know if I can take another month of this nonsense.

I wish they wouldn’t keep on about Hillary having Parkinson’s. My mum has Parkinson’s and it is such a dreadful and frustrating disease to deal with. It isn’t a joke and I wouldn’t wish it on anybody.

Trump has admitted to barging into the dressing areas during the beauty pageants. We’ve got at least one Teen USA contestant saying he did it at their pageant. You know, the one that includes women as young as 15?

They’ve found out about the vagenda of manocide!

Weird (and just about drained) Eddie

Trump has admitted to barging into the dressing areas

In both his attitude and his actions, he acts like he’s channeling Mel Brooks character saying “… it’s good to be the king”

as President … (wait, make that “president”, no caps for this clown), especially with a mandate from the type of people we see supporting him, he’d be out of the little bit of control he’s shown. He’d also be a walking, talking impeachment proceeding, especially if the alt-righties and his other supporters don’t vote on the rest of the ballot.

Actually, he’ll likely quit two months in, when he sees that the rest of the world won’t cow to him.

@ Nick G
YES! there’s an xkcd for every occasion, and that one is in my favourite top 5 😀

@ Axe
I remember a ‘Human Sexuality’ class years ago introducing the psych concept of ‘female orgasmic inadequacy’: when a woman doesn’t orgasm from heterosexual intercourse. Once we’d picked our jaws up off the floor, oh how we laughed and chortled.

Waleed Aly (who rocks, by the way) has been highly critical of Trump. The best response McInnes could come up with was speculation on Aly’s penis size and sexual history. Sick burn, bro!

He made a series of comedy sketches called Gavin McInnes is a Fucking Asshole, so ya can’t say he’s not self aware…

In his world, and among his audience, it really is 🙁

I remember a ‘Human Sexuality’ class years ago introducing the psych concept of ‘female orgasmic inadequacy’: when a woman doesn’t orgasm from heterosexual intercourse. Once we’d picked our jaws up off the floor, oh how we laughed and chortled.

I’m old enough to remember Anne Koedt’s groundbreaking Myth of the Vaginal Orgasm — and young enough that I wasn’t aware (before that book came along) that women were required to have vaginal orgasms or be seen as sexually immature.

No wonder Faking It was invented.

And later on that same planet…

No wonder Women’s Liberation was invented.

In Sheila Ballantyne’s wonderful 1970s feminist novel Norma Jean, Termite Queen, protagonist Norma Jean stands before the Egyptian god Osiris, who places her soul on a golden scale, where it is balanced against the white feather of Ma’at, the feather of truth, of harmony.

Fun facts: Fictional character Norma Jean is a visual artist fascinated by all things ancient Egyptian. She also has a husband and three children, and her family responsibilities continually interfere with her art.

Husband: “I want my wife back.”

Norma Jean: “I want my life back.”

She lives in Pleasanton, California, a suburb that stifles her, and the very place that nonfiction human Scott Adams lives.

@ Axe
You always have the perfect image/gif. Clever boy 😀 😀

My god, that novel Norma Jean sounds brilliant. Thanks for the details!

Doesn’t it? Cheers much for the recommend, Kat!

I don’t know what film that’s a trailer for but I’d watch it.

You always have the perfect image/gif. Clever boy ? ?

@Mish, @Diptych
I loved Norma Jean, Termite Queen. And I was surprised to see that it’s in print again.

Another fun fact: I visited the Rosicrucian Museum in San Jose, California, a few years ago. I went because the character Norma Jean haunts this place, which is full of ancient Egyptian mummies and art and household objects and so on.

It also has a library, so I looked up Norma Jean in the card catalog. Nothing!

I talked to the librarian, who had never heard of the book. “Your museum is Norma Jean’s favorite place!” I told him. He was jazzed! He promised to get a copy….

PS: “Turn to the clitoral”?! It does have a nice ring to it.

So I needed a break from marking and spreadsheets and all that riveting stuff: 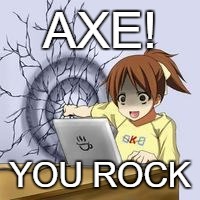 Apologies for this one… I know, right? The first thing in my mind after reading the “wars about a personal slight” bit was a memory of GWB doing all he could to declare war on the guy his Dad could not beat up.