The Wiggles are coming for your children.

Well, technically they’ve always been coming for your children, in that they are a bunch of musicians who write and perform music intended to entertain and educate preschoolers.

But now they’re really coming for your children — at least according to Rod Dreher of The American Conservative, who in a column this past Sunday ripped into the Australian kids’ band, declaring them to be subversive “soft totalitarians” trying deliberately to warp young children’s minds.

What you are seeing here is another manifestation of soft totalitarianism. I know what some of you are saying: there he goes again, that right-wing nut, getting bent out of shape over a kid’s show. Sorry, but this is a big deal. They are trying to colonize the minds of pre-school age children with this gender-ideology lie, which seeks to destroy the essence of man. It’s disgusting. They really are coming for our children. Do not be fooled. This is culture war at its purest: to conquer the minds of kids so small they don’t even know that they are being indoctrinated.

So what exactly have these dastardly Australians done? In an attempt to appeal to a more diverse audience, the band has added four new members, three of them women, and one of them an indigenous woman. They’ve also added some new characters to their show, including a non-binary unicorn who uses “they/them” pronouns.

It’s this last addition to the WIggles that’s got Dreher so pig-biting mad. “Why can’t kids just be kids?” he asks. “Why do the sick, twisted elites of Anglophone culture have to force their obsessions onto little ones?”

To Dreher, this means (culture) war.

We are living through a great unveiling. You can only live in denial for so long about the rottenness. Nobody can be neutral going forward. You must choose. Refusing to choose is a choice.

Well, it’s Team Wiggles for me.

Oh, and here’s the scene of their YouTube show featuring the new unicorn and their pronouns. (It should be set to start playing right where Shirley Shawn the Unicorn makes their first appearance.) This may not be for everybody; I found it a bit like listening to fingernails scraping on a blackboard. But hey, I’m not a 4 year old, and the 4-year-olds apparently just love this shit.

O/T; but I saw this and thought of all our needlecraft fans here. 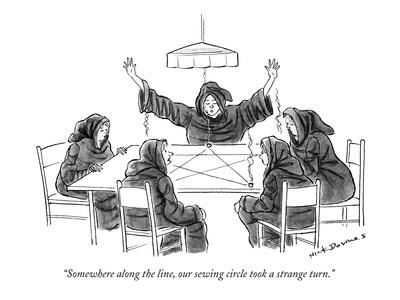 There’s a book series I’ve heard of about a society of witches who work their magic via whatever they’ve created – yarn they’ve spun and dyed themselves, garments they’ve knitted or crocheted. Naturally the patterns described in the book were available for sale. I’m blanking on the author’s name, but I want to say it was one of the Cherry Tree Hill folks. (Other fiber artists here may remember better than I did.)

I read Clive Barker’s Weaveworld a few times back in the day. That had an interesting central premise.

There is a lot of weaving in mythology and magic. In Norse myth for example, the Norns were three beings who wove Fate. 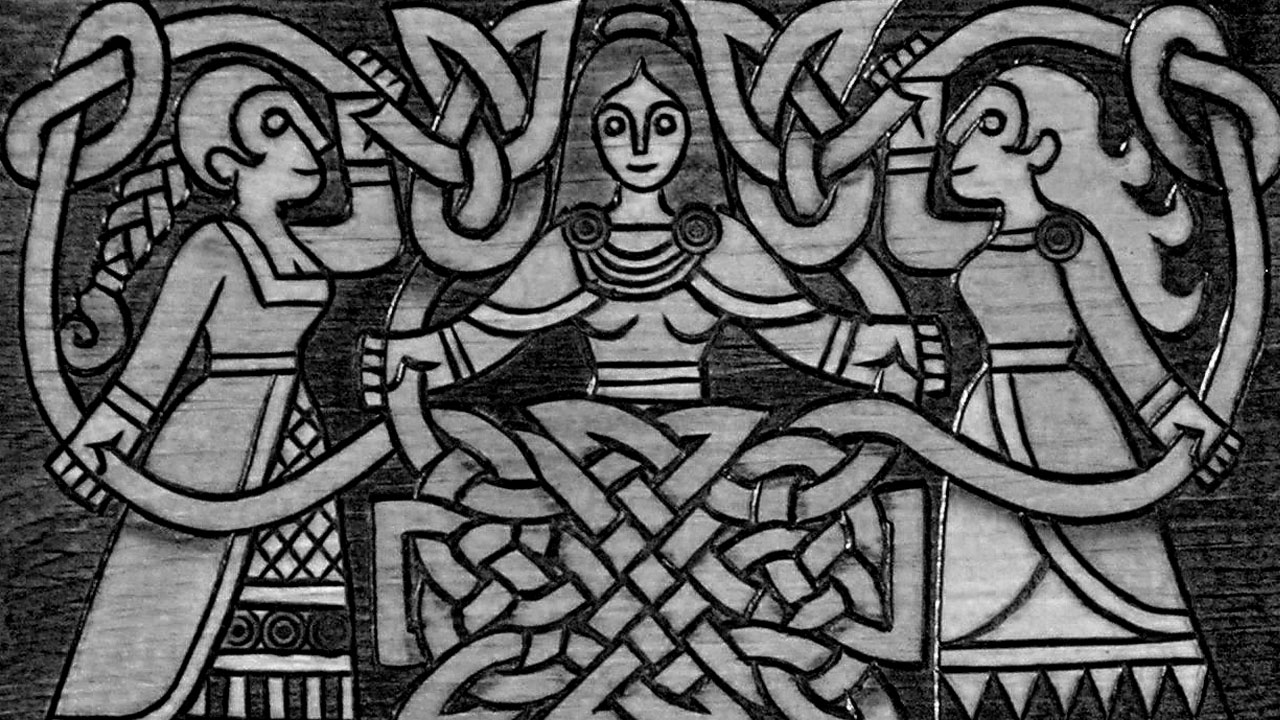 I suspect there’s a whole PhD to be had on needlecraft allegories and the otherworldly.

Well, if you’re spinning, you’re taking something that looks pretty chaotic at first glance, and then once you’re through the prep you see there’s more to it than chaos. Then you put the fiber on your spindle or your wheel and make all those fibers behave, and (depending on the number of plies and technique) create something that is greater than the sum of its parts.

I’m not a very experienced weaver, but … yeah. There’s a very builder-y vibe to the whole thing.

A lot of technologies must have seems like magic to people not familiar with how it was done. Heck, there’s loads of skills today that seem magical to me. But it’s easy to see how they would get wrapped up with myth and magic. Even if that was understood as metaphor at the time.

Like when you see bronze casting. I can well imagine how that ended up as people pulling swords out of stones.

I don’t know anything about needlecraft; but you know I find it amazing how you can make complex 3D structures out of something essentially one dimensional; and that’s before you get on to how people put patterns in there.

I read Clive Barker’s Weaveworld a few times back in the day. That had an interesting central premise.

I should read that. I never have. I’m rereading The Great and Secret Show right now, which is my favorite of Barker’s stuff that I have read. I’d really like for it to be made into a limited series by HBO or Netflix or something. So much of his other stuff has been adapted, so I don’t know why not this.

The Circle of Magic and The Circle Opens series by Tamara Pierce feature a large amount of craft magic. The very first character introduced is a young woman whose magic talent revolves around weaving, spinning, and other such fabric related things. Other characters in the series have unusual (for the world setting) magical talents lending themselves to weather, plants, blacksmithing, cooking, dance, wood working, gemstones, etc, etc.

General plot: In a world where most mages are generalists who have relatively little power but great versatility, many of the main characters are those who possess great power within a limited scope, such as the above. Much of the plot revolves around how they must learn to harness their special gifts, even in the absence of anyone who actually has the same gifts and can teach them how to do so.

The books are a good read. I recommend them.

I’m going to second .45’s recommendations of the Circle books by Tamora Pierce. The fiber arts are described accurately, btw, though I wouldn’t say you should take them as a how-to guide.

I actually looked into it, and Shirley Shawn is not a new character (they were introduced as a female unicorn in 2019). They’ve just changed their pronouns.