Ok, they’ve finally done it. A post in the Men’s Rights subreddit has turned my brain to mush.

I mean, this post got 90 upvotes from the r/MensRights crowd. Can anyone explain to me what the fuck this dude is talking about?

Reminds me of the signs that can be found posted about not feeding the bears here in the wilder parts of North America. Except those are more for safety’s sake, given how bears are much larger than humans, and have few qualms about having one for lunch on a whim. Plus a bear that can’t feed itself without human handouts is going to be in a major bind come the end of tourist season in the fall, and they need to put on the pounds to last through the winter on. 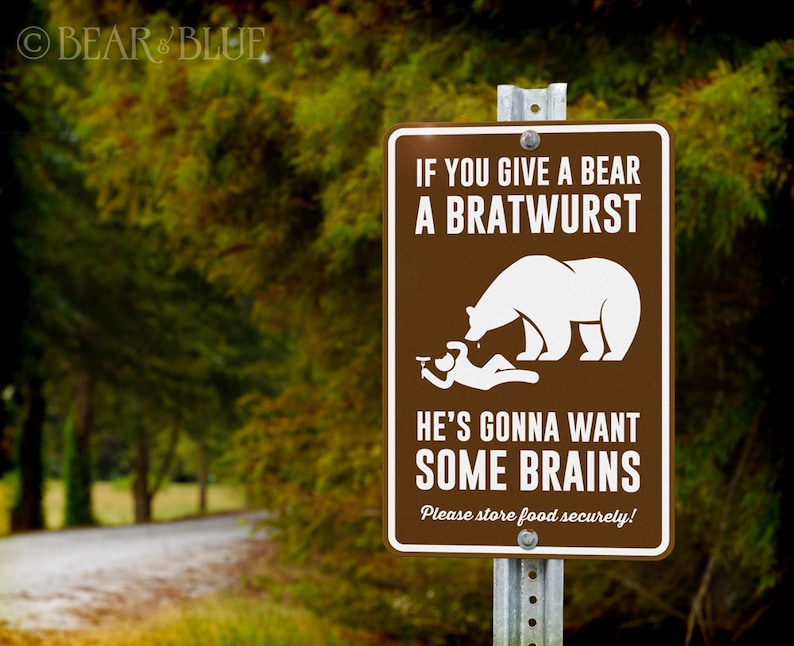 Those signs can be bought online, btw. If anyone else wants one for themselves, that is.

I don’t remember if it’s gulls or another related birds, but one of the most harrowing read I have had in biology is the description of a sea bird learning how to hunt on land.

The bird was big and mean enough to overpower small mammals easily enough ; the problem is that his beak wasn’t adapted to predation. So the bird used his weight and two feet to keep the prey restrained, then slowly opened the belly and eat what was inside. Slowly because the bird did not know how to do it well and had a bad tool for that task. Meanwhile the prey took a long time to die, since being slowly sliced open and eaten isn’t a particulary clean or quick death.

So, in a sense, I would feed a bear more readily than a gull if I had to feed either. At least if the bear decide to eat me he will competently do it.

Someone speculated the gull may have thought the pasty was a tortoise and my head a rock. I find that a bit unlikely though. How would a gull even know what a tortoise was?

My theory is he was just a git.

Well they are basically dinosaurs.

Luckily, whilst I am a mammal, I don’t think anyone would describe me as small.

@Ohlman: A quick google of ‘seagull hunting pigeons’ shows that this is a worldwide phenomenon since the lockdown started and also before that. Apparently they also attack rats and dogs. But pigeon-hunting seagulls have been around way longer. in 2014 there was one in Hyde Park, and the reason I googled it was the first time I heard about it was one in Vatican City (which for some reason strikes me as a hilarious subversion of what some would call ‘the natural order’. Those who are wrong about it).

Opportunistic carnivorous behavior is something often overlooked in herbivores too: deer or cows will eat meat if given the opportunity.

@Battering Lamb
It would be more correct to say that animals commonly thought to be obligate herbivores can eat meat and sometimes choose to do so*. They won’t preferentially eat meat when available the way bears do, and won’t ever subsist entirely or even principally on it. Doesn’t work at all the other way around: obligate carnivores like cats and weasels cannot derive sustenance at all from the vast majority of plant matter, and must have a diet that’s principally meat ( this is why dogs can get by fine on cat food but not vice versa). Turns out that a digestive tract that makes meat into meat can be a lot simpler than one that turns grass or bark into meat.

*Which has been known for some time but little remarked in the literature because of the deeply unnatural environment in which it happened. Remember Mad Cow Disease?

Surely the reason people are having fewer children is because for the first time in human history having children is…a choice?

Decades or centuries ago, you got married young (as you pretty much had to) and unless you were physically unable, children would follow. Now with effective contraception people can actually plan their families. And that’s not a bad thing.

@Steph : contraceptives were known since at least egyptians, probably before. And while it’s hard to be sure of when people widely understood which kind of sex can lead to children, it probably was rather early too. So childrens weren’t automatic consequence of not being asexual either ; more a social and long term need.

Social and long term here mean that people expected you to have children, and having children is useful both for your old age and to have more redundancy in your family. (like if you don’t have children and break your arm, I pity your significant other during the time you mend that)

Also, people in the middle age actually didn’t get that much more adult children than now. They did have more babies, because infantile mortality. It’s partially true that it made them less able to plan for their family – if you wanted 3 children back then, you’d better have 4 or 5 pregnancy to account for mortality, and can end up with 5 or 0 surviving children depending on luck. Still, pregnancy did not happen randomly even back then.

So, in short, no it’s far from the first period where humans can choose to not have. It’s sort of true that they can plan mor precisely, but humans alway have an habit to plan around pregnancy.

Which make senses : lions and a lot of mammals also do that, albeit in arguably cruder ways.

@Dalilama: Thanks for the clarification!

I had a seagull snatch a vegan pasty; then a few seconds later drop it back on me. So, one failed convert there.

A quick google of ‘seagull hunting pigeons’ shows that this is a worldwide phenomenon since the lockdown started and also before that. Apparently they also attack rats and dogs. But pigeon-hunting seagulls have been around way longer. in 2014 there was one in Hyde Park, and the reason I googled it was the first time I heard about it was one in Vatican City (which for some reason strikes me as a hilarious subversion of what some would call ‘the natural order’. Those who are wrong about it).

Opportunistic carnivorous behavior is something often overlooked in herbivores too: deer or cows will eat meat if given the opportunity.

Of course, seagulls are normally quite strictly carnivorous; they just typically hunt fish rather than other adult birds. AFAIK they also often scavenge on carcasses of mammals and large fish, and hunt eggs and chicks of other seabirds, and sometimes they opportunistically hunt small rodents such as lemmings.

(No confirmation on whether Alan’s pastry was dropped as a performative meat-eater rejection of perceived vegan proselytism, or for some other reason.)

I think what happens when some animal species adapt to living in cities is that they find there’s less competition than usually, especially in the niche of large predators. Therefore, any predators that are present in the city (such as seagulls) get relatively creative in their hunting behavior if there’s prey (such as pigeons and rats) that is abundant and not very accustomed to dodging predators.

Also, I thought about this with regard to the booming population of proud, brave suburban capybaras in Nordelta, as they probably have no jaguars or whatever animal normally eats capybaras.

The Gay KKK hate minorities “in a special way … with compassion”
https://www.youtube.com/watch?v=lQ4hYdxMIzY


@Surplus to Requirements
I don’t know Canada from Granada, but that Jagmeet guy seems nice.

(No confirmation on whether Alan’s pastry was dropped as a performative meat-eater rejection of perceived vegan proselytism, or for some other reason.)

Captain Ockham the Obvious tells me the gull dropped it by accident.

Last edited 8 months ago by Frey

I don’t know Canada from Granada, but that Jagmeet guy seems nice.

Yeah, but he also has no chance of winning. His party is polling a distant 3rd so one of the other two is sure to form government.

@Surplus to Requirements
Aren’t coalitions possible if no party secures a majority? Trudeau might have to come begging for his party’s support.

I’m not as chuffed about the federal NDP as I ought to be. I can’t see them being all that effective if they get power. Not because their policies will be bad per se! Just that any government they might form would be dominated by politics instead of policy.

I think i’ve become jaded! How terrible. I’m sure that’ll clear up before long. I should really just have some lunch, probably.

There’s also the minor matter that the NDP has won less often than the Cubs. As for coalition government, we have that now and it has been maybe a little bit better than a Lib majority government, but the Grits have been able to do anything for which they could get either NDP or Tory support. And based on the polling data the continuation of this state of affairs is the best-case scenario, with that and a Tory government being the likeliest two outcomes.

What I can’t figure out is where the Tories get all their votes from. The middle class is shrinking, the working class/unpropertied are growing, the richy-rich have never been more than a very tiny minority, and Tory policies are basically about appealing to the homeowning salaried middle class to get the bulk of their votes. (Which means they won’t do a thing to address housing affordability, since existing homeowners would need to see their property values drop precipitously! Neither will the Grits of course, since they have to peel away some of those same middle class votes to get enough to win, in turn because the NDP eats into their left flank. But with the middle class collapsing you’d think there’d be a leftward shift in the electorate … of which there’s as yet no sign.)

What I can’t figure out is where the Tories get all their votes from. The middle class is shrinking, the working class/unpropertied are growing, the richy-rich have never been more than a very tiny minority, and Tory policies are basically about appealing to the homeowning salaried middle class to get the bulk of their votes.

It’s hard to deny the narrative that Trudeau “cares nothing for ‘the common man’ and only wants to be ‘woke’”
(e.g. Urban Dictionary: https://www.urbandictionary.com/define.php?term=Peoplekind)

And if you have a binary worldview that must mean being anti-‘woke’ is synonymous with caring about ‘the common man.’

No Tory cares for the “common man” either, unless he’s pulling down a six figure salary, used to do so, or is wealthier even than that. And no Tory cares for non-masculine-identifying people, period.

So the smart response to that would be to vote NDP, surely? :/

By binary worldview, I mean that people tend to divide the world into two teams, like Coke and Pepsi or Autobots and Decepticons, or in politics (usually) Left and Right.

Despite the animosity between Centrists, Socialists and Tankies; right wing media portrays the Left as a monolith.

So, if Trudeau and the Liberals are left wing and the NDP is MOAR left wing, to a casual observer who doesn’t know much about politics, the NDP is just MOAR Trudeau.