Well, the brave souls of the Men Going Their Own Way movement are having none of it. Here is the MGTOW case against yoga pants, based on my perusal of several dozen recent postings on the subject in the MGTOW subreddit.

Make sure not to laugh at any of these, as the threat of yoga pants is very, very serious and not just some ridiculous crap these guys have come up with to make themselves feel like they’re being oppressed by women they REFUSE to date.

And the bullshit about “men just needing to control themselves?” Well, it’s bullshit. Men can’t but become seriously distracted when half-naked women prance around them. It’s the way we’re made. It’s biology. So fuck off, you bare assed bitches. We’re working.

Actually they make women look better than they look naked, which is somehow worse than looking like they’re naked because it’s a LIE or something.

“You don’t know what they look like naked,” greenleefs informs his fellow MGTOWs. “Those pants lift and squish together.”

Yoga pants enable women to use their ass power to extract wealth from hardworking betas and sex from Chads.

As one [deleted] commenter sees it:

The yoga pants is to show off their ass so that Chad and beta bucks (depending on which they are stalking) will drool on himself while he throws sex and cash at her.

Bing_Bang_Bam is similarly outraged that “[e]ven fat cows that have rolls and folds that shouldn’t even be there” wear yoga pants — a true “[c]rime against nature.”

Iqbal40862715 is similarly confused that he finds himself attracted to very much older women.

Yoga pants are a net nagative. They make everyone look good and it’s a total mind fuck.

Saw this 80 year old broad in a bathing suit the other day at a pool. She was probably an Elvis groupie in the 50s/legit perfect 10. Now she is cute and in good shape but wrinkly and old.

Goes into a bathroom to change Puts on yoga pants meets up with the grandkids and sure enough looks awesome.

Apparently women in yoga pants can jump right over that mythical wall they’re all supposed to hit at the age of 30 or so.

“They aren’t comfortable,” asserts LJHova, “that’s just the excuse they use to convince themselves they aren’t whores.”

You know women wear them multiple times before washing them and just a thin layer between butthole and the outside world.

It’s comfy when Chad grinds his cock separated by the [layer] of his pants and thin layer of her yoga pants in the middle of work.

Seeing women in yoga pants is sort of like seeing attack ships on fire off the shoulder of Orion, or something.

Global_MGTOW sheds some tears in the rain:

I’ve seen it all already. I’ve seen women wearing a see through shirt in a very public place with thousands of people, including children, showing off her rocket tits implants. I’ve seen girls wearing mini skirts so small that you can constantly see their panties with zero effort. Seen obese landwhales wearing yoga pants with the words “JUICY” written across the back.

All those moments will be lost in time, like tears in rain. Time to die.

Ok, I added that bit from Blade Runner at the end. Because, you know, these guys aren’t melodramatic enough already — and trying way too hard to convince themselves and each other of the existential horror of, basically, tight sweatpants.

One of the things that was said to me over and over was that the European colleague was a man and had responsibilities and a family so I had to be understanding. Accusations of misandry weren’t explicit but they were definitely there, couched more as women have forgotten that men support other people.

I’m sorry you went through that. There was no way to handle that in a way that would have produced a favorable outcome.

Yeah, I never understood those who view Rorschach as the hero. I was sympathetic to him, because he was a tragic, broken human being, but he certainly wasn’t a hero.

I’ve been able to come to terms with Lovecraft’s virulent racism in a way that I haven’t with Dikto’s Objectivist propagandizing, but I suspect that is a combination of several factors.

– Lovecraft died long ago,
– Lovecraft did not influence my personal philosophy,
– and yes, my own white privilege – Lovecraft’s racism hurts people, but Dikto’s Objectivist propagandizing hurts me.

AuntieMameRedux: I don’t know how else you could have handled it, because I’m sure you did everything you could in the situation. You knew the people you worked for, you knew how far it was likely to go.

Telling your story is a shitty second best, but it does help. We need to document this, the real harm that is done, because this is just not acceptable.

I’m sorry the people you worked for and with were total butts. You deserved (and deserve!) so much better.

I remember 10 or 15 years ago there was big class action gender discrimination suit against Walmart. The management handbook actually said that men should get promoted ahead of women because men are supporting families. Just enraging. I’d be willing to bet a sizable percentage of Walmart’s retail employees are single mothers too.

Yikes, that’s awful. I’m sorry you had to go through that. You are the one who has the most information available about your situation, I’m sure you made the choice that was the most reasonable given all the elements of the issue. I like to imagine that you might have been able to raise hell and get credit for your work and pull the asshole’s reputation down around his ears, but I’m far too familiar with how the balance of corporate power tends to operate (i.e. In favour with the person with the most money and contacts, not whoever might be in the right). So more likely you would have spent a lot of time and energy for the company to squash you and push the problem under the rug. 🙁

Sharing the story brings light to your experience, though, and may give others the courage to speak up.

I had a brief glimmer of hope for Lovecraft not being a complete racist piece of garbage when I was reading At The Mountains Of Madness. Was all like “oh, what’s this? The bizarre, alien lifeforms are identified as people and viewed sympathetically? Maybe Old Howie had a bit of a realization about how people who are different from him are still people?”

“…oh wait, the sympathetic people aliens were exterminated by their even more bizarre/monstrous servant race after giving the servants too much power. Damn it, Howard. I was rooting for you.”

I’m sorry to hear about that Auntie Mame. I’m afraid I don’t have any concrete advice; but at the risk of trite cliches I’d just say this.

I have no idea what you could have done; I suspect very little if anything.

But there’s nothing you should have done. You were the victim in this. There was no onus on you to do anything. It was the others who failed in their responsibilities, not you.

Thank you all so much. I know I am far, far from the only one to have this kind of experience and this one wasn’t even that hidden. People from other departments knew it had happened and mentioned it to me.

I have never felt that I am very good at the political part of work – and by that I mean being one of those people who manage to go over their colleagues but somehow come out with their hands clean. The kind who can manipulate via two removes. Not that I have ever wanted to be like that, but I sure wanted to be able to spot it so I could stay out of trouble.

For years I wondered if I had different innate talents if I could have done something. I know there are a lot of intelligent people here and people who work hard in difficult industries. Thank you for the support that I didn’t miss anything.

Because you all are right. The long spoons guy that I would have had to go to? He was the one who made the announcement that my work was being rewarded – but I wasn’t seen as the person who had done the work. I couldn’t see telling that guy that he didn’t know what was going on in his own division and had thrown his political support behind a guy whose biggest talent was flattering the people above him. Yeah, I might suck at politics but even I couldn’t see that going well. LOL.

No, I thought at the time that I would be eaten and destroyed trying for justice. Thank you all that I can put this to rest as a was there a different choice I could have made thing.

The thing that is upsetting, not just for me, but for everyone who is overlooked – and that is a lot of people once you start counting things up – how much talent and brains and ambition to make things better just gets wasted? And is what we are seeing now in our elite really talent and brains? Because it looks more like criminality to me. And we fete this as a society because those people are rich and wealth must be the result of hard work and talent, right? I feel like I am in Seinfeld’s opposite day.

Regarding deaths of abusers and other miscreants. There are several abusers that I will be quietly pleased when they pass. And not just things that are personal. Some people the world is just better off without they have done so much damage. That, that, the assholery of abusers and destroyers is the shocking thing. Not that others are happy that they cannot abuse and destroy any longer. Or that they have the temerity to say so. Reminding other abusers and destroyers that history might not remember them kindly is an added bonus.

Back on the topic of Price, since dudes tend to actually listen if a dude explains the same thing women have been saying, here’s a dude explaining why her firing was bullshit.

Wanted to share an update from Price where she makes a very good point about ArenaNet’s response being an escalation.

Jebus, I wasn’t aware of those extra-awful details.
Don’t know if you’ve seen this, but Price’s firing has apparently inspired a bunch of assholes to complain to game companies about other women devs; Jennifer Scheurle shared this one: 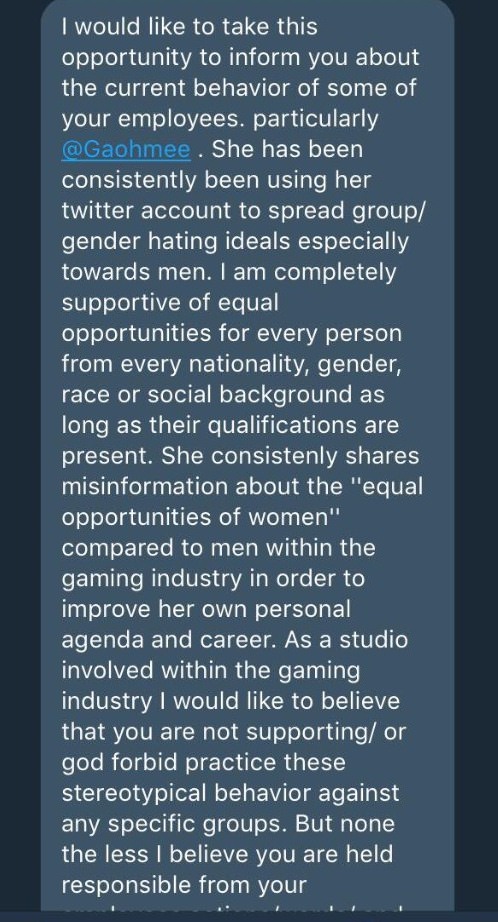 @Mish
Ugh. I’ve seen another of those, too. It’s so awful.

This a third hand story from Twitter, so grain of salt, but I saw a post fro someone saying her friend’s company got a bunch of outraged gamerbro form letters that just had “femalename” as a place holder. They’d forgotten to fill in the target’s name.

And the more a guy acts like a complete asshole on Twitter, the more he’ll be admired (generally speaking). Women get a bit snappy (or are perceived to have gotten snappy), and it’s unforgivable.
(I realise there’s a lot more involved here than ‘civility’, of course)