← YouTube Neckbeard Exposes Anita Sarkeesian's Secret Plan to Hypnotize the World By Using The Verb "To Be"
In a series of brilliant, furious Tweets, Zoe Quinn tears apart the myth that #GamerGate has "moved beyond" harassment of women → 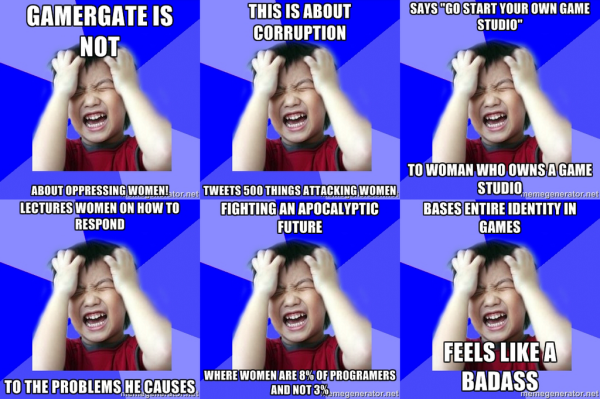 The memes above? A fan of indie game developer Brianna Wu made them, using the text from some of Wu’s acerbic tweets about #GamerGaters. Wu thought the memes were funny, and posted them to Twitter.

This was just sent to me, a new meme called Oppressed Gamergater. Love it. http://t.co/Sp9sQPgLxQ pic.twitter.com/6UEWRgPGcn

Haha. This Oppressed Gamergater thing is so full of win. I'll RT the best ones. http://t.co/Sp9sQPgLxQ pic.twitter.com/4DQtwfpGN5

It turns out that #GamerGaters don’t really have much of a sense of humor about themselves.

Over on 8chan, the regulars decided to take over the meme.

A fan made a meme of 6 of my Tweets. #Gamergate spent day filling it with 36 pages of garbage http://t.co/tjzQxePXH0 pic.twitter.com/aailgFlNM9

It got nastier — TRIGGER WARNING for what follows for explicit, violent threats.

#Gamergate is zerging a meme an Isometric fan made of my Tweets. It's up to 45 pages of attacks like this one. pic.twitter.com/fYhHr5QeZm

8chan/#gamergate generated 60 pages of this today attacking me. I'm going on a Twitter break till I feel more safe. pic.twitter.com/A0GYsdJ3KA

Oh, but #GamerGate isn’t about misogyny. …

Then, believe it or not, it got worse:

8chan/#gamergate just doxxed me, posting all kinds of personal information about me. Guys, THIS is the war on industry women. Wake up.

And then it escalated to death threats:

And, here's the part of the night where I call the police. pic.twitter.com/uMByxBEtYz

The police just came by. Husband and I are going somewhere safe. Remember, #gamergate isn't about attacking women. pic.twitter.com/ZU6oEVxMGL

All this because she made a few fucking jokes on Twitter. About #GamerGaters. While being a woman.

Oh, but #GamerGate is about ethics.

But guess what, assholes:

Announcement: I AM NOT GOING ANYWHERE. I am going to keep making games. And I will keep speaking up for women in gamedev.

To the women out there scared to make games because they see this happening, I swear – WE WILL CHANGE THIS CULTURE FOR YOU.

Posted in: #gamergate, 8chan, a new woman to hate, advocacy of violence, antifeminism, boner rage, creepy, doxing, empathy deficit, entitled babies, evil SJWs, gamebros, geek girls, harassment, mantrum, men who should not ever be with women ever, misogyny, no games for girls, no girls allowed, threats, twitter, video games
← YouTube Neckbeard Exposes Anita Sarkeesian's Secret Plan to Hypnotize the World By Using The Verb "To Be"
In a series of brilliant, furious Tweets, Zoe Quinn tears apart the myth that #GamerGate has "moved beyond" harassment of women →

Donate to the Mammoth!

We Hunted the Mammoth is an ad-free, reader-supported publication written and published by longtime journalist David Futrelle, who has been tracking, dissecting, and mocking the growing misogynistic backlash since 2010, exposing the hateful ideologies of Men’s Rights Activists, incels, alt-rightists and many others.

We depend on support from people like you. Please consider a donation or a monthly pledge by clicking below! there's no need for a PayPal account.

Send comments, questions, and tips for stories to me at dfutrelle@gmail.com, or by clicking here

If You’re Being Harassed

Keep this blog going by clicking on the link below! You don't even need a PayPal account.