Three guys are hanging out on a stoop when a young woman walks by.

“Check out the eggs on her!” declares one.

“Boy, I’d sure like to make an omlet out of THAT!” adds a second, making egg-scrambling sounds with his mouth.

There is a moment of silence.

“Um, I thought she had a cute butt,” says the third guy, somewhat hesitantly.

The other two turn to stare at him with a mixture of horror and disgust.

“What are you, some kind of pervert?” the first guy asks, indignant.

“Jesus christ, dude,” adds the second, shaking his head, “I”m not sure I can even hang out with you any more.”

Welcome, ladies, to the secret world of heterosexual men. You may have gotten the impression that men are obsessed with big boobs and thicc asses. Nope! They are all about the EGGS, baby! They are the EGG MEN, they are the egg men, I am the walrus, goo goo ga-joob. They want to FERTILIZE THE HELL OUT OF YOU.

At least according to one Red Pilled Man Genius whose thoughts on the matter have recently gotten the attention of feminists on Twitter.

I present to you the BAD ANATOMY TWEET OF THE WEEK (although, technically, it’s from June).

Huh. Either this guy thinks women lay a big unfertilized egg every time they have sex, or he thinks girls and women should pretty much be perpetually pregnant from puberty onwards. I’m not sure which belief would be worse; they’re both gross and wrong.

My favorite response to Mr. Imig’s tweet so far:

All this talk of chickens and eggs is making me hungry.

Some Kind of Sex Chicken Carrie

I don’t get it. We have more information and knowledge at our disposal than we have ever had before. Men (and women) of the past certainly were a lot less knowledgeable of “sex things”, yet they met, courted, married, and babied relatively fine.

But today somehow society has regressed into this unbelievable ignorance about women. Is it laziness? Is it purposeful ignorance? Is it mating strategy? I am at a complete loss.

At least Tippi gave us the sex chicken line I suppose. 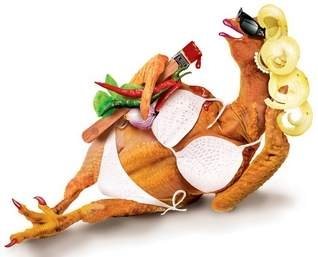 So, I bought a bottle of champagne to celebrate getting a new job. But I’m an introvert who got used to not being around people all day, every day and after 4 days of work, I wanted a quiet weekend alone. So I’m planning on drinking the entire bottle myself tonight.

Is that weird? Champagne is not normally consumed alone.

Don’t anyone worry that I’ll get way too drunk though. I have a very high tolerance for whine.

Also, Red Pillers are echoing the good old talking point of women as breeders? That’s a bit fascist, if you ask me.

If you say “brutal truth” that makes you a tough guy who knows all the important things. Because brutal. You eat logic rocks for breakfast. Or raw concrete or something

/I may be a little drunk right now

This is right up there with the ignant men who think that women can ‘hold in’ menstrual blood until they get to a toilet.

I looked at his Twitter feed. He thinks very VERY highly of himself.

Well, I do make a great omelette.

@WWTH Congratulations on the new job. I started a new job in late June after working from home for 9 years, so I can relate. Hang in there. It does get a little easier, but I do value my alone time more so now.

Sex Chicken sounds like a good name for a Primus tribute band.

“feminism sold women bad advice” uhhh.. anyone remember BUYING the Feminist Advice Book? no, the best lessons in feminism are the ones we get for free, from schmucks like Egbert here.

PS who is the egg gal in the header? she’s fabulous…..

Everyone knows the greatest value a woman can offer a man (or a man a woman) is a back rub.

This guy thinks he can handle “brutal truth”? Okay, here’s one for HIM:

The greatest thing he has to offer womankind is his beard…and I don’t even LIKE beards. Whoever told him it was a good trend to hop onto, sold HIM bad advice.

(Also, congrats, WWTH! Enjoy that bubbly any which way you like it!)

Sex and eggs? I saw that scene in Tampopo.

First off, congratulations. Second off, there’s absolutely nothing wrong with drinking champagne on your own, with the one caveat that you can’t really put a stopper in the bottle and leave half of it for the next day, so you do have to drink it all. Well, I mean, you can, but it’s not really very good the next day.

Champagne also does not have to be reserved for special occasions.

Congratulations, WWTH! I’m really excited for you. And confident you’ll rock it.

(Anyone want to wish me luck in my own search?)

Is this not the same guy who was sharing his brilliant insights about how you should never build up your girlfriend’s self esteem because women are naturally hypergamous and will leave you if you’re nice to them?

Congratulations, WWTH! I hope you drank and enjoyed your champagne.

Best of luck, Orion. I hope you find something quickly.

My sexuality is asexuality. I’m not exactly sure how I can offer that to anyone. I can knit beanies/scarves/socks that use the ace flag colors and I’m happy to share, I suppose. That’s pretty valuable.

The eggs part is significantly easier, though! I use a menstrual cup, so collecting the discharge instead of just flushing it would just require someone to provide me with some tupperware. I’m not sure what these men would want with it, but if they’re so jazzed about eggs, they’re welcome to have mine. They just have to pay me a modest fee, provide some tupperware, and pay for shipping. They’ll get one (1) egg cell and approximately 100 mL of blood, monthly. It’s a great deal. Any takers?

@Catalpa, honestly, there have been times in my life I was longing for someone to offer me a little asexuality. I’m far from asexual myself but it’s still frustrating how hard it can be sometimes to get any other kind of attention.

“Sex Chicken” sounds like a good name for a Primus tribute band.

To me, the phrase suggests Cleopatra’s condition at the end of Tod Browning’s Freaks.

Now I’m reminded of a very old cartoon of a chicken and egg in bed together. The egg is smoking a cigarette and looking very smug. The chicken is looking pissed off and saying, “Well we certainly answered THAT question.”

Congrats on the job, enjoy the ‘pagne!! (I dunno what happens to others when they drink a whole bottle of bubbly… myself, I break out in handcuffs and wake up in jail…)

I’ll see myself out….

What about women who can’t, or don’t want to, or no longer can, have children? Are they also wasting eggs?

How about women who freeze eggs in their early twenties? Couldn’t they then ride the cock carousel with impunity?

Why is this dollar store imam not making the same reductionist pronouncements about sperm? Isn’t trillions of unfertilized sperm during the 20s an even bigger waste?

It’s amazing to me how many dudes still think the old, tired SPINSTERS!!! fearmongering schtick still works. Most women in their 20s are well aware of how the biological clock works. Note how these guys never blame the 20-something Chads these women are dating, who are unwilling/unable to commit because they’re too busy having fun and getting established in their careers. Nobody’s accusing them of selfishness.

Anyway, the most humungous waste of an egg that I can think of would be allowing it to be fertilized, and then raised, by someone whose mating strategy is to panic women and then stampede them, like cattle. That poor little egg deserves better.

Well, I guess you really can’t make an omelette without betraying your own ignorance of biology.

@Buttercup Q. Skullpants: That’s a good point, about the so-called Chads being unwilling to commit. As usual, it’s women’s fault for failing to breed enough kids to replenish the white race. However, have a kid out of wedlock, and you’re a reviled single mother.