The Summer 2017 WHTM pledge drive is on! Donate generously to enable our continuing coverage of whiny baby-men! Thanks!

A tragic day for whiny baby-men — the BBC just announced that the next Doctor Who will be a lady. Naturally, these sensitive souls took at once to Twitter to make their displeasure known. And to make jokes about Doctor Who turning into Nurse Who amirite fellas high five!

Here are some of the best of the worst Tweets I’ve seen so far. I can’t decide which are my favorites — the ones lamenting the loss of a crucial male “role model” or those suggesting that a female Doctor Who makes as much sense as a male Mary Poppins (which would be perfectly fine to me, by the way).

Female Doctor Who?? More like Nurse Who. Birds aren't smart enough to be doctors

I'm actually quite shocked at the decision to cast a woman the should call it Nurse who now lol ??

Fuck you BBC. Fuck you lefties. You are in the minority. The BBC has been taken over by leftists. Can't wait for the show to fail. #doctor13

Doctor Who officially ruined. Time Lords being women not an issue, 50 years of tradition out the window is. What next 007 being Janette Bond pic.twitter.com/Hj3buVMx8s

#DoctorWho So patronising to women to be chosen due to political correctness. No room for merit and talent if PC comes first.

It started with woman Ghostbusters, Star Wars now Dr Who, what's next 007 Jane Bond ?, it's not women wanna be equal they wanna be superior

Women have their own heroes like RIpley, Buffy and Wonder Woman, there is no need to take away role models for men #notmydoctor

I am shocked the new doctor is a women why break tradition… I'm not backing down women empowerment, but in the fight place… #doctor13

#doctorwho The regressive left are going crazy over the choice, next they will want a transgender to take the role as the Doctor.

No, I don’t understand what that last one means either.

“By not making such sentiments a breach of the comments policy it avoids giving any weight to allegations that Mammoth is just an ‘echo chamber’ or that dissenting views are forbidden;”

I don’t think that what is important is not looking like an echo chamber.

If something like that is going to go up in the comments policy to prevent repetitive and upsetting arguments, it should be made very clear and firm as to what arguments are allowed, and what arguments are not. Is it just sympathy for Trump voters that is included, or is it any arguments over classism? Because I agree that the reason why the comments policy works so well RE: ableism is because it’s clear and firm and puts boundaries in place for both sides of the argument.

Am I hallucinating or did one of Alan’s comments disappear?

It could be nice to have new and updated welcome package. If one person was willing to organize the whole thing, it could be a group project. I do have the time to do it if no one else wants to (although I’m not the most computer savvy person ever so I don’t know that anyone would want me to), but only if there’s enough interest in it and if people are genuinely willing to make contributions.

An explanation of some of the inside jokes

Links to some social justice 101 type of resources

I’d be more than happy to put in at least some of the development work. I’d rather not use my personal domain but I could get a new website set up if needed.

I’d throw in a detailed how-to for gravatars, seeing as that’s a frequently asked question.

I uh don’t have any other ideas right now. I think you’ve got most of everything covered already.

Am I hallucinating or did one of Alan’s comments disappear?

Oops sorry, I hope I haven’t left you suspiciously eyeing up a beer or anything.

I’d responded to Scildfreja about her common fallacies point because I’d originally put something like that in my response to your suggestion.

In that original comment I’d mentioned Scildfreja’s talent for rebutting such fallacies. But I’d deleted that bit because it came across as a suggestion that Scildfreja should end up doing it. That’s what prompted my comment about guys getting women to do emotional labour.

But then I deleted the second comment because that had the same problem.

I couldn’t find a way of phrasing; (1) this needs doing (2) you’re good at this, without it coming across as a demand if that makes sense?

I’d include something that says that regular commenters are from all over the world, even though a some of the posts discuss things that are US centric.

Sometimes people assume everyone here is American, and respond without realising that commenters either don’t know US-specific things, or that English could be someone’s second or however many language.

Maybe something describing how moderation works, that if you change your ‘nym/email address, you’ll pop back into moderation until you’re let out.

I’d throw in a detailed how-to for gravatars, seeing as that’s a frequently asked question

Maybe something describing how moderation works, that if you change your ‘nym/email address, you’ll pop back into moderation until you’re let out

Craving both of these!

HTML lessons? Lotta people getting tripped up by the Blockquote Mammoth (Edit: or just not knowing how to blockquote in the first place) and such. And maybe a gentle urging that folks not direct reply to comments. Messes up the flow of posts and sometimes causes sliding

That’s a fantastic idea, WWTH. I’d be very happy to help write or collate content for an updated welcome pack.

@Alan: I’d go with “Your rebuttal of these fallacies is always well done. Thank you for taking the time to do them. I appreciate the time and effort that goes into it.”

ETA: the welcome package – how to put in a picture, and a youtube video, so both will embed.

Clearly we need to write this thing in the style of the WHTM Post-Apocalyptic Survival Village we end up talking about every few months. We could put in some sweet Mad Max gifs of Furiosa, or some lovely pictures of little wood cabins nestled deep in the woods! Yes, I think this is what we need to do.

For services, I suggest that we just write it up on The Googs as a google doc and then ask David if he’ll make another header item on his website for us. If that’s something he can do without having to pay money, then it’d be easier for us to reference it and it’d be more likely that passers-by would encounter it. If not, we can dig up services then.

@Alan, my duck, my egg! (I have no idea why I am calling people that these days) Please, be as presumptuous as you like. It won’t make me upset. Being asked things is social reinforcement for me, as it turns out, and at the very worst I’ll just say that I can’t do it at the moment. So go ahead and ask if you ever want my opinion on something! My specialties are incredibly useless outside of a very, very narrow field, so it’s nice to be thought of as having a valuable opinion!

“Your rebuttal of these fallacies is always well done.

Heh, I do that with friends who are good at baking though. “You make great cakes…Oh no, I was just saying…Well, if you insist.” 😀

Well it wouldn’t be the Internet without an unsolicited duck pic. Duck is a general form of address in some parts of the Midlands over here though. So if you go into a shop it’ll be like “What can I do for you duck?”. You’d feel right at home there.

What does it mean to people when they ask how I am, and I say “Just ducky, thanks!”? Because I have been saying this for decades, so I think Scild’s use of “my duck” is…well…just ducky.

I uh can write, sorta. Just tell me what, where, and before when.

Just… don’t ask me to promise you it’ll be any good.

I understand “just ducky” to roughly mean “quite good”. Pretty much the same as “just peachy.”

I say “just ducky” all the time! Also “just peachy!”

It’s English, of course it is! No doubt that’s where I’ve heard it. My folks (or half of them) are from Devonshire, but I’m sure I got it from them. by osmosis of course. Tah!

I encourage everyone to write. Someone should set up a googum doc or something.

Ay up me duck…

I’m sat in a cafe in Nottingham right now, and it’s wall-to-wall ‘duck’ in here – it’s enough to make anyone from outside the Midlands quite mardy! 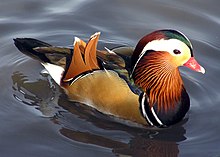 NuWho is rubbish anyway (‘eastenders with daleks’ as one Tv critic put it) so making The Dr a girl probably won’t make it any worse than it already is. I wonder though if she will have a male companion who bosses her around the way the female companions boss the Nuwho male doctors around. i suspect not.

I mean, um…sure, go ahead?
It’s not like you’d be taking work away from women – Julia Roberts ALREADY GOT PAID FOR THAT ONE.
And people who love the original would still be able to go back and watch it, just like you can with the first 10 male Doctors.
And, like, it doesn’t seem like there’s ever going to be a dearth of opportunity for women to play prostitutes, so, sure, you guys can have this one.