If you watched Trump’s appearance at the Al Smith dinner last night, you might be forgiven for concluding that he bombed, big league.

The annual charity dinner is sort of a political version of a celebrity roast, albeit one that is a little less vicious and a lot less funny. The main task of any politician speaking at the event is to demonstrate the rudiments of a sense of humor, especially when it comes to jokes directed at them.

Trump failed. Unlike Hillary, who managed to more or less get into the spirit of the thing, Trump’s only decent self-deprecating joke, if you can call it that, was at Melania’s expense, not his own. And he devoted most of his time to nasty attacks on Hillary that didn’t even vaguely resemble jokes, managing to draw actual boos from the crowd in the process.

At the Al Smith charity dinner, Trump laid a trap for the elites and unleashed his vengeance on a gathering of effete plutocrats, smug globalist whores, lapdog media hacks, intellectually inbred urbanites, and the Wicked Bitch herself. …

He nuked the ruling class and the Clinton Machine from orbit and took a piss on their smoldering ashes.

Weidmann continues on in this vein for several more paragraphs, but I imagine you’ve got the gist of his, er, argument already.

Amazingly, Weidmann has managed to find another Trump fan whose, er, analysis of the event is even more histrionic than his own, an anonymous fellow running a blog called Face to Face. Here’s what that dude has to say on the subject:

[T]he time for yukking it up with the Establishment is over. Watch as Trump the court jester begins with his routine of juggling several glistening knives in the air, for the amusement of the white-tie audience, then calmly collects them one by one into his hands, and throws them straight into the chests of the plutocrats and the media.

The courtiers mocked him as a reality TV clown, and struck cruel blows against his little-people supporters whenever they felt like a little entertainment. So the jester decides to put on a show for the court where “Trump acts like Trump” and they’re all laughing along with the act. He convinces them it would be a riot for them to put on wax masks showing elitist caricatures, then begins a fire-breathing routine — only to spit the fire right onto their masks. As the courtiers scramble around the ballroom with their faces ablaze, the jester and his little-people companions storm out and burn down the rest of the palace.

Yipes. I think someone’s metaphoric license needs to be revoked.

If you want to watch what actually happened at the dinner when Trump got up to speak, here are some of the highlights, by which I mean lowlights.

You can see the whole thing here.

What do you mean by rigged?

I thought it was possible that Miggs was a returning troll, but if he hasn’t figured out how to sock after all these weeks, I guess not. You’d think a 290 year old engineer would be wise enough to figure it out.

In addition to hearing what you mean by “rigged,” RarePolarBear, I would be interested to hear your definition of average people.

It’s hilarious that Miggs is still screaming into the void.

@wwth
I don’t even think he even considers his act of using a man as a beat stick to win an internet argument as wrong. I think that weeks after his act, I don’t think he feels bad about doing that in the least. If he did feel any form of regret, he wouldn’t commit so wholeheartedly into a rhetoric that he violated so casually.

@RarePolarBear
I would like to hear on what you believe rigged and average people to be. If we’re talking about sensationalist media not doing their jobs maybe we can have some meaningful dialogue.

If you bring /pol/ shit, please leave. I don’t like associating with cloak and dagger bigotry.

RarePolarBear’s stunning evidence that Hillary is evil: she’s going to smile when she wins an election.

That’s right. Being happy at accomplishing a major, difficult, and important goal that only 44 people before her have ever achieved: a cause for sadness.

Washington Journal this Sunday was all about this. They had two election experts on. One was a Professor Overton (not the ‘Overton Window’ chap though)

They did have an interesting discussion about elections generally though, from voter registration to how those mechanical and electronic machines work. That was especially interesting to those of us from a country where we still use a pencil.

@Anne T: I haven’t found that man’s name yet, but as someone on Twitter wrote, he is all of us. 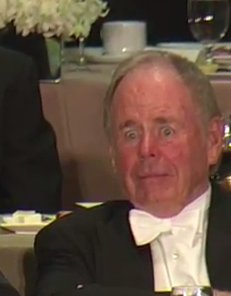 The only person who sees them is me, and I delete them without reading them.

A MGTOW said to Futrelle:
“Sir, I exist!”
“However,” replied Futrelle,
“The fact has not created in me
A sense of obligation.”

Thanks. Yes, he was horrified! Would love to know his name, though. Strange that in every photo I’ve seen, only Maria Bartiromo’s name is mentioned in the captions. I think I know why.

@AsAboveSoBelow, that photo is truly amazing.

Thank you for the only real audible laugh of a fairly grim day.

those of us from a country where we still use a pencil.

Snap!
It’s not actually compulsory to use a pencil on an Australian ballot paper, but it is compulsory that they are provided at the ballot box.
The government opted to provide pencils rather than pens because they are cheap, can’t leak all over a ballot paper or dry out when stored between elections, are easily sharpened when they break, etc.
It’s perfectly legal for voters here to bring their own pen and use that. Postal voters use their own pen without a second thought.

Some people bring their entire set of colouring pencils and get creative:
http://blogs.abc.net.au/antonygreen/2011/11/strange-things-voters-do-to-ballot-papers.html
These sort of things happen when voting is compulsory. I would be a bit sad to see them disappear if we switched to electronic voting.

We still use paper ballots and pencils in MN. It works just fine.

My husband and I did our ballots last night. I’m going downtown to drop them off today. Given the number of issues, I’m wondering why we Californians even *have* a legislature.

AsAboveSoBelow, that photo sums up so much about this election.