Well, it seems that some of the good folks on the Men’s Rights subreddit have taken issue with my post this morning congratulating them on their massive victory in brigading their preferred definition of “MRA” into the top spot on Urban Dictionary. Apparently they think I was trying to brigade their victory away from them.

Let’s take a look at some of their specific complaints, shall we?

The lovely fellow who calls himself ThePigmen brings up the important issue of me being a “walking shit-stain,” makes an irrelevant pedantic point, and accuses me of running ads I’ve never actually seen on my own site, perhaps because at least some of the ads are tailored to user profiles.

Whelponry notes that my last name sounds like a naughty thing in French, sort of.

Another commenter isn’t quite sure who I am, and decides to simply presume the worst.

Remember, when you presume you make a pres of u and me!

There is the obligatory wall-of-text-so-big-I-had-to-make-two-screenshots-and-smush-them-together suggesting that no woman would ever touch me and that I am basically like the Ku Klux Klan, if you think about it.

One commenter notes that the central premise of the Men’s Rights post — that I sent my “wolf pack” out to brigade the Urban Dictionary definition of MRA — is not actually true. They get downvoted.

Wow. Apparently the Battle of Urban Dictionary is much more important to these folks than I even realized.

If you ever wonder why I turn down offers to debate with MRAs, this is why: they would totally win!

In a weird way, it’s comforting to find out the reason you have your feminist opinion is apparently so similar to mine. Yours is so you get sex as a favor from women, and mine is because a man will never desire or love me. If I weren’t happily married to a man who dotes on me, I’d be tempted to suggest we should go trolling for sexual favors and heretofore-denied-affection together.

Aww. The poor little lambs. Such a brief, shining moment of victory after they brigaded UD themselves (which is why, I suppose, they think that’s what our little pack did – the whole world acts just like they do, after all!)

Also, I would be remiss if I didn’t point out my Top Definition UD victory with my husband’s word ‘Nervousing’. Don’t be shy about showering me with acclaim and praise, I can take it.

Reminds me of this thing I came across the other day 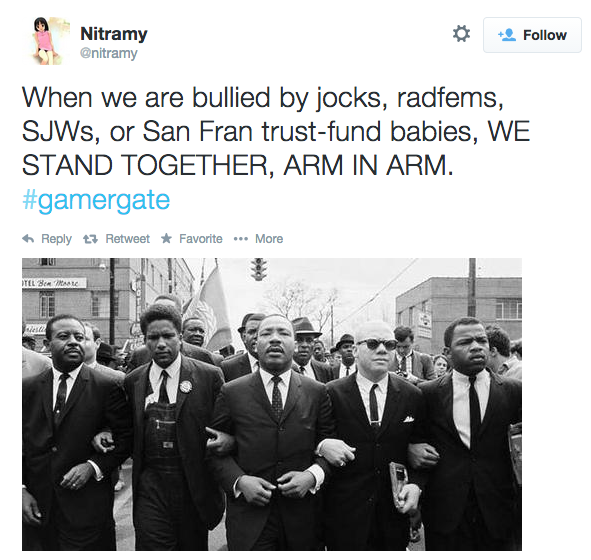 Not recognizing one of the most illustrious figures of the 20th century is supposed to be a DEFENCE!?

@msexceptiontotherule: Don’t blame the universe! I like the universe. It’s pretty and it’s where I keep my stuff.

Maybe your parents fed you oatmeal in the wrong way. Did it contain cinnamon like it’s supposed to? Did you eat it while perched on top of the world instead of clinging desperately to the underside? Were you male while you ate it? These are important scientific questions which could change the outcome because science.

Futrelle doesn’t sound anything like fucker in french. Though, “seal air” in french would sound like fucker. Because a seal (the animal) is french is a ‘phoque’, geddit?

I have known about this for 20 hours now and I STILL haven’t gone on to UD! I am a regular here so there must be something faulty in David’s ‘brigading training’ – I think you need to be a little less subtle in your approach!

Hey, I’m a wolf and insane? Crazy? Which one was it?

Pfft. I love how we apparently “brigade”, when most of the snarking by regulars is confined to this blog and its affiliates.

But then again, these guys form the movement whose activism is literally just sitting around calling women nasty words. Compared to them, we’re probably all on the level of minor civil rights heroes or something. Except we’re akin to the kkk? But don’t they have actual, literal klan members fronting their movement?? I’m confused.

Antisocialite
“I find it amusing that they think they know about David’s sex life.”

I find it very creepy that they are obsessed with David’s sex life.

Skybison
Holy false equivalency Batman! Being bullied (aka being called out on your misogyny and just ruining peoples’ lives because they did something you hate like critizing your favorite games) is the same as being denied rights and murdered because of the color of your skin apparently. Wtfudge?

AltoFronto
“Except we’re akin to the kkk? But don’t they have actual, literal klan members fronting their movement?? I’m confused.”