Tech companies have reacted differently to the impending end of Roe V Wade. While most have remained silent on the issue, some have come out strongly against the Supreme Court’s (draft) opinion. The game developer Bungie denounced what it sees as “a blow to freedom in America and is a direct attack on human rights.” Microsoft and Amazon have gone a step further, pledging to cover traveling costs and other expenses for any employee who has to travel to another state to get an abortion.

PlayStation Boss Jim Ryan probably wishes that he’d kept silent himself. Instead, as Bloomberg was first to report, he put out a company memo addressing both the death of Roe … and the recent birthday of his cats.

Without expressing his own position on Roe, he began by asking employees to keep cool. “[W]e owe it to each other and to PlayStation’s millions of users to respect differences of opinion among everyone in our internal and external communities,” he wrote.

And then he decided to lighten the mood a little bit by talking about his kitties.

Ryan told employees that he

“would like to share something lighthearted to help inspire everyone to be mindful of having balance that can help ease the stress of uncertain world events,” saying it was recently his two cats’ first birthday and elaborating over the next [five] paragraphs about his cats’ birthday cakes, their noises and his desire to one day get a dog.

This infuriated more than a few employees, Bloomberg notes, who were taken aback by his weirdly oblivious tone in dealing with an issue that is literally a matter of life and death for pregnant people.

In internal discussions viewed by Bloomberg, which haven’t been previously reported, employees at several PlayStation studios expressed their displeasure at the tone of the email. Some women wrote that they felt their rights were disrespected or trivialized by the message. One employee said they’d “never been so mad about a cat birthday before.”

As loath as I am to admit it. there are times when it is inappropriate to talk about your kitties, or to post pictures of them wearing little hats. This was one of them.

While ordinarily, talk about kitties is welcome, the rollback of basic human rights is not the time to suddenly pivot to Mr. Fluffikins (in an official statement — cat pictures are useful in private life).

Wow, what a way to let everyone know that this issue doesn’t affect him! This also seems like those people that insist everyone roll over for the abuser in the family in order to “keep the peace”.

One employee said they’d “never been so mad about a cat birthday before.”

I’m with you, David. It grieves me to say it, as an utterly obsessed cat person, but that was an awful choice. And it makes cats look bad.
Mei-Mei also agrees 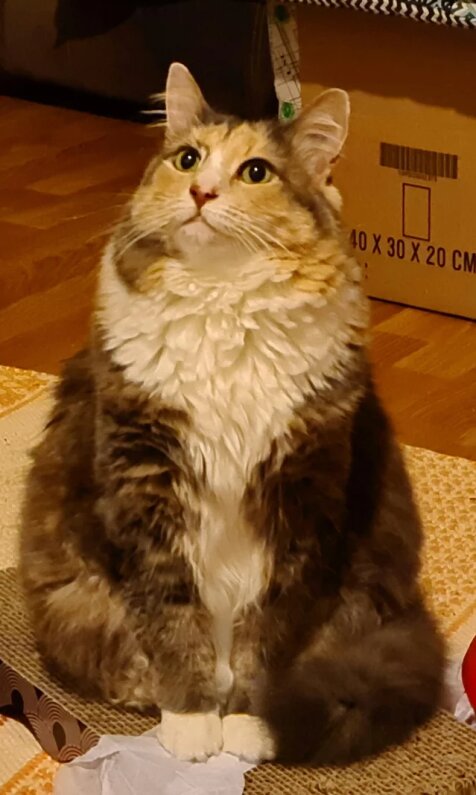 That MeiMei is a total glamour chunk!

@Crip Dyke, she says thank you!
She is a ball of sweetness and she also has objectively correct takes on everything 🙂

And now for some people who’ve been doing actual work to save babies: a research team at the Children’s Hospital Westmead in Sydney, Australia may have identified the cause of Sudden Infant Death Syndrome; head researcher Dr. Carmel Harrington devoted her life to the project after losing a son to the disease:

OT Got done with finals. Apparently if I do things right. This fall will be my final semester and I can graduate with a Bachelors Degree in Accounting!

Link doesn’t work. I get some page saying “One more step” and blathering about a(n absent) captcha, instead of the article you intended. And I’m not doing anything unusual at my end (using a VPN or TOR, for instance, nor had I previously generated any traffic to that site recently, or, as far as I can recall, at all). So the site must be doing this either to every new visitor who hasn’t had a cookie set by it before, or to every such visitor from inside/outside certain geographic areas. That’s called being a very bad net.neighbor … even were their captcha page not also broken.

@Oogly: Fingers crossed for you! (not literally since I can’t type that way)

I agree with MeiMei. That chonk is obviously objectively correct about everything and I want to smooch her floofy head. If it’s okay with her.

About the post :
From someone so high in the hierarchy, you would expect – if not silence or empathy – at least subtlety. Well, putting a message about birth while asking not to speak about abortion is anything but subtle. Fucking asshole. Well, at least, people know where he stands, now.

As stated by others, Mei-Mei is correct and adorable.

@Oogly Boggles, huge congrats; finishing a degree is an even bigger deal these days, I think. Not sure if the US situation is similar but here in Aust I see what my students are dealing with and I’m in awe.

Mei-Mei says thank you for everyone’s kind comments, and will accept all pats and head squishes 🙂

Really fantastic work by Dr Harrington. I hope identifying a cause (Low blood BChE levels indicating a problem with the part of the brain that goes “whoa too little blood O2, we must not be breathing enough, STARTLE AWAKE NOW!”) will give parents some closure and researchers a path forward for saving future kiddos.

I’ve always thought it was a minor miracle to wake up again after being asleep. It’s scary to think the part of your brain responsible for waking you up might miss danger signals in your blood chemistry, or even itself fall asleep.

Re: Jim Ryan, the absolute worst part of his email isn’t even mentioned:

”that dogs really are man’s best friend, they know their place, and perform useful functions like biting burglars and chasing balls that you throw for them”

They know their place.

And not only that, they respond to dog whistles!

@Surplus:
The link works for me. I just had to click on the empty box next to “I am not a robot” and it took me to the article (firefox on windows)

I trust no one here will object to a whole wriggling and sproinging bedful of kitties:

I’ve always thought it was a minor miracle to wake up again after being asleep. It’s scary to think the part of your brain responsible for waking you up might miss danger signals in your blood chemistry, or even itself fall asleep.

I’d guess failure modes there are pretty strongly selected against.

Whatever mechanism wakes me up has worked reliably — around 15,000 times in a row without a single failure. It’s not especially likely that the first time it fails is tomorrow, and the same likely applies to yours. 🙂

Sleep seems to perform a number of combined functions, from diverting resources to various maintenance and repair tasks, to resetting biochemistry, to rebooting various of the cognitive systems, and running some kind of incremental, generational garbage collector over one’s memory, moving some stuff to longer-lived storage and marking the rest as free to be overwritten.

(If you’ve ever noticed that it’s easy to go forward through commonplace sequences — the alphabet, the digits of your phone number, and things like that — but hard to go backward, it looks an awful lot like we’re implemented with not only a garbage-collecting memory manager but the singly-linked list as the default data structure. Forget Fortran; Lisp is the oldest programming language, and older than they know. The blind watchmaker beat Joe McCarthy to it by God only knows how many millions of years.)

OT: Even more good news, new license, new Gundam Kit and new glasses. Everything seems to be coming up positive for me.

@FM Ox: That is way more kittens than I could deal with IRL, but delightful in a video. BOING!

And the possible SIDS reason sure looks likely. It explains everything. Just shouldn’t have taken a mother who lost a baby and happened to be a scientist, and this long.

@Buttercup: Oooh, well spotted. There’s a high pitched noise for sure. Let me guess, he’s a rich middle-aged cis SWM. (googles) Yep. Although I guess he might not be straight, which means he gets to care even less about people with a uterus.

I proclaim this “Ooglyboggles Week”. Hope the new glasses help with the new Gundam (which version? I’m partial to “Iron-Blooded Orphans”).

Got the Entry Grade RX‑78‑2 Gundam. I was able to complete the real grade Lupus Barbatos on my own but that one was half built, so it was more a rescue project. Wit luck this one should be an easy way in, and only for 10 dollars. The other gundams at a Target was like 12-20+ dollars.

Ah, a classic mecha. I don’t know how people do the super ultra kinds, frankly.

Also, as someone who got their first proper anime as random imports snail-mailed and endlessly copied on VHS with no subs or dubs, the thought that Target now carries Gundam is astonishing.

Also, as someone who got their first proper anime as random imports snail-mailed and endlessly copied on VHS with no subs or dubs, the thought that Target now carries Gundam is astonishing.

And let me guess—you were at the mercy of printed synopses by the one guy in the anime club who actually knew Japanese—meaning that your fanfiction often rested upon house-brand assumptions.

Weirdly, most people I know aren’t talking about the whole Wade vs. Roe debacle, even those who have very strong opinions on such things. The only thing I can think of is that everyone is just burned out from everything happening these last few years. They just can’t deal with it right now, which I can empathize with. Been a lot of shit going down.

@ Full Metal Ox and others

That is unexpected good news there. A YouTuber I sometimes watch lost his son to SIDS recently. That might be bittersweet to a lot of people like him though, knowing it wasn’t something he and his wife did, but also knowing a possible cure that could have prevented it was almost within reach.

There was a while in the 90s, when Cartoon Network was airing Gundamn Wing, that Gundam kits were available in mainstream retailers like Target and Toys ‘R Us (RIP). They were, unsurprisingly, limited to the Gundam Wing series, as this was the first time any Gundam series was on US television, but they were the proper Bandai kits imported from Japan. They offered both 1/144 scale and 1/64 scale, IIRC. Teenage me bought quite a few.