If Donald Trump’s immigration policies make you sick to your stomach, join with thousands if not millions of other Americans and PROTEST tomorrow. There are literally hundreds of events planned across the country, in every state.

You can find one near you at the MoveOn site, where there’s an interactive version of that map there at the top of the page.

If you can’t make it in person there are many other ways to help. For example, CALL YOUR REPS about this issue — 5 Calls has all the numbers you need and helpful scripts. And remember, you can call more than once about immigration over several days. 5 Calls has scripts and advice on how to call to urge your reps to:

And while you’re at it, demand that no Supreme Court nominee be considered until after the midterm elections. Mitch McConnell straight-up stole a Supreme Court seat for Trump and we shouldn’t give him another pick while he’s under investigation for possible (well, a lot more than possible) collusion with a hostile foreign power.

In preparation for our anti-Trump anti-right-wing-authoritarianism-white-supremacy-child-imprisoning-facist-bastards demo on the 13th when mango mussolini comes to the UK, I’m getting some space blankets to put messages on, to wear/hold up on the march, in reference to the kids being given nothing else (how can any human being do this shit? But of course they do. It’s fucking unthinkable).

Any pithy recommendations? (I’m generally not good at pithy)

The Texas Tribune has compiled a list of organizations that you can donate money to, if you can’t march for whatever reason but have some $$ you can spare.

Missing the start because it’s wall to wall traffic and road work in the entire city. I’m really getting pissy!

I attended a little protest here in southern Ontario. The enthusiasm was somewhat dampened by the ungodly heat and humidity, but it was good to feel some solidarity. Wish there was more that we canucks could do, but at we can at least push to abolish the Safe Third Country Agreement now that the States is CLEARLY no longer safe for refugees.

Made it to the march. Too far back to hear the speeches, but I’ll post my pics later

This is a video about unaccompanied migrant children and court proceedings. It’s both heart breaking and ragefuel.

I feel a need to write something about the post WW2 “Judge’s Trial” for one of the legal journals.

Barely made it to the one in Worcester, MA. Got home yesterday, woke up at eleven, got me and husband into car. So no sign, but there was a group that had fabric you could stencil into a bandanna. No trouble except at least one person had to leave in an ambulance due to the weather. Several hundred people at least – probably at least some people from here went to the Boston protest

To my everlasting shame Mr. Dakry and I had to back out of the Irvine protest. His recent diabetes diagnosis and his efforts to cope with same in diet has been playing silly buggers with his blood sugar and he’s the only one with the driver’s license. :/ (Need to fix this.) We have also uh… digestion issues that uh… yeah. TMI.

Quite a bit of mutual guilt and wondering when the border between self-care and standing by while all this shit happens is crossed. Although I’m sure the delights of the past couple years haven’t done wonders for Mr. Dakry’s A1C level or either of our mental health. :/

We shall try to make up for it by screeching a fuck of a lot on Resistbot, which is a beautiful thing and made for protesting introverts.

Here’s a picture I took. I liked the sign with the Game of Thrones reference. Of course. 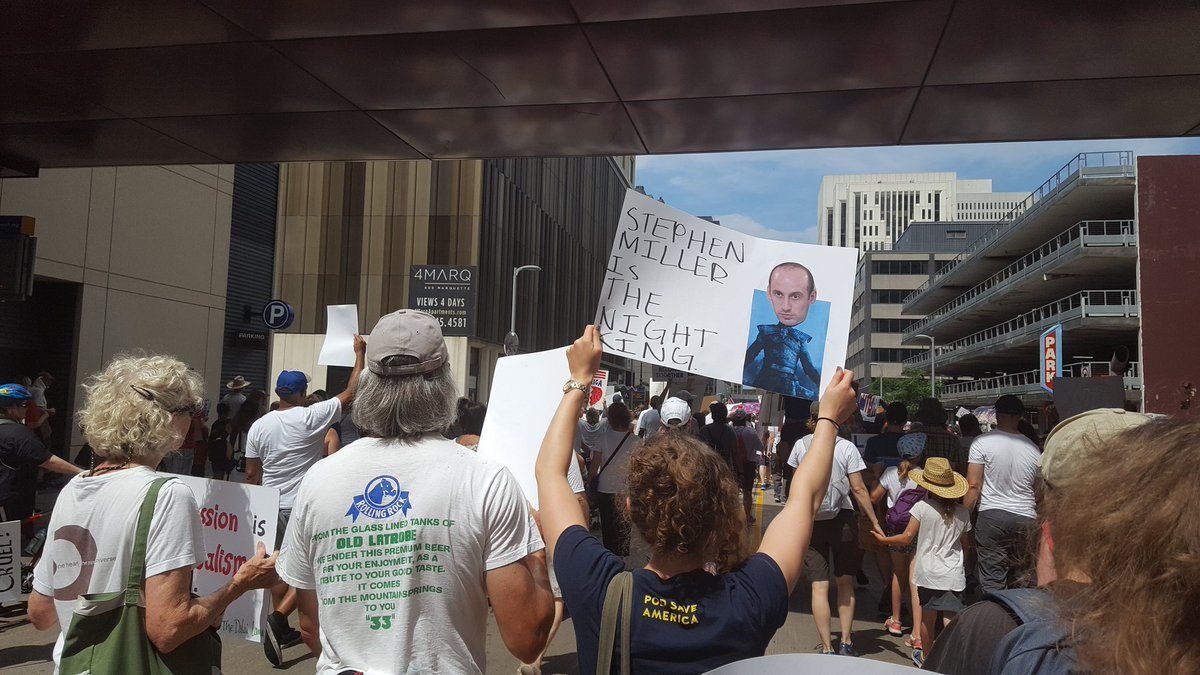 I took a few others but was never at a vantage point to capture the whole scope of the crowd. I think it was a few thousand though. It was a great turnout.

I was going to use a sign that was simple, to the point, and hopefully would have been new information to people with their heads in the sand:

“Seeking asylum is not illegal. Denying them hearings is.”

Thank you to all people outside the US for your solidarity.

I managed to spend ~15 minutes on my lunch hour at a protest (minus driving to/from). Saw people I knew and met the Dem candidate for the House.

Aye. Too many of the dumbshits on FB either don’t know or intentionally ignore that point.

Mine would have been: “And then they came for the immigrants, and I said NOPE.”

Tough talk from someone who wasn’t there. :/

There wasn’t any event here in Podunk, Ont., and even if there had been I’d have had to walk 40 minutes to get to it, in 40 degree weather … uhm, nope.

But I have been protesting the Trump regime online in various ways every single day since day one, including my participation here and assorted social media posting. I guess that will have to do.

Oh, I did also sign a widely-circulated petition (I think from Leadnow) to rescind the Safe Third Country Act the other day.

I donate a small bit to the ACLU per month now. It’s better than nothing. And it’s an organization I know uses the money for the right things, as opposed to the innumerable progressive organizations on my email lists that keep wailing at me about how the latest developments are the END OF THE WORLD!!!1!! unless you donate money NOW NOW NOW!!! God damn it, you people, DO something with it, don’t just ask for more I cannot give! And quit shaming me every time I unsubscribe because I simply cannot take the mental overloading!

Sorry. So yeah, ACLU. And should look into the SPLC as well. Those I know are bona fide organizations and not just excuses to take money from people desperate to stop this shit and then not follow through with helping them to do so.

Husband and I happened to be in our state’s largest city, so we went to the rally there. It was so thrilling to be marching with thousands of other people. We did it more or less anonymously, though – we live in a little town and there are unfortunately a lot of people here who would judge us. It sucks that “toddlers shouldn’t be jailed” is a controversial stance in this day and age.

My local protest seemed to have been called off even though I repeatedly check my email for updates. There were two others Husbeast and I found who were lost as well. I looked up the link on the Move On page* and there was a notice about another nearby address that turned out to be a deserted (closed) Waste Management location in the middle of nowhere near the old March AFB.

We decided to see if there was one (as was rumored) in downtown Riverside (since we were nearly there already) and that one was nearly over with. We stayed with the remnants for a couple of hours and found out that it had started at 8:30 and had 1,200 people. There were only a dozen or so when we arrived at 12:30. Our other rally was supposed to start at noon.

*It’s now gone and seemed suspicious at the time. There was also a request for white people to bring a PoC with them so that the protest wouldn’t be appropriated which is also now gone. This was through MoveOn.org, but the message was on the navigator page where the volunteer organizer could communicate with protesters.