In the wake of last night’s missile strikes on Syria, Trump is declaring “mission accomplished!” (Haven’t we heard this before?) Meanwhile, his fans on the far right, from literal Nazi Assad lovers to not-quite-Nazi America Firsters are crying foul. Alex Jones is literally crying.

Apparently it’s all the fault of the Deep State.

Trump is a strong and powerful leader but the deep state is in complete control of his actions pic.twitter.com/pLjgX2n2sx

Meanwhile, every right-wing shithead that has spent the past several years demonizing brown-skinned refugees as terrorists is suddenly a humanitarian.

The weirdest thing about Trump’s base coming unglued about him violating his America First principles by bombing Syria is that they really believed he had principles.

Among those feeling betrayed, Ann Coulter, who spent the day retweeting angry alt-rightists denouncing their former God Emporer Trump.  There is a slight irony here.

The author of a book literally titled "In Trump We Trust: E Pluribus Awesome!" continues to be SHOCKED that Trump is an unprincipled liar. https://t.co/5zcWJzcv2U

Coulter also retweeted this legitimately cute video, which I thought was a nice change from her usual horribleness.

Not all right-wing racists are mad at Trump, though.

This is what US fascism looks like. Ultra-entitled racist capitalist children with no regard whatsoever for human life pic.twitter.com/7lGuKetQnR

There are several problems with that last tweet, not least the fact that this is not actually a picture of Damascus.

Back here in the US, Starbucks is calling the cops on black men for … going to Starbucks? And the cops are arresting them.

@Starbucks The police were called because these men hadn’t ordered anything. They were waiting for a friend to show up, who did as they were taken out in handcuffs for doing nothing. All the other white ppl are wondering why it’s never happened to us when we do the same thing. pic.twitter.com/0U4Pzs55Ci

Starbucks needs to buy them free coffee for life.

From somewhere else, so they don't have to go to Starbucks.

These days I think we can all relate to this:

Well, hang on now. If the OMGDEEPSTATE is in complete control of his actions, he can’t be all that strong and powerful and leaderly.

You cannot have it both ways, kids.

This quote from Umberto Eco’s essay “Ur-Fascism” is evergreen:

The followers must feel humiliated by the ostentatious wealth and force of their enemies. When I was a boy [in Mussolini’s Italy] I was taught to think of Englishmen as the five-meal people. They ate more frequently than the poor but sober Italians. Jews are rich and help each other through a secret web of mutual assistance. However, the followers must be convinced that they can overwhelm the enemies. Thus, by a continuous shifting of rhetorical focus, the enemies are at the same time too strong and too weak. Fascist governments are condemned to lose wars because they are constitutionally incapable of objectively evaluating the force of the enemy.

The Starbucks thing pisses me off so badly.

I’ve been pretty much arguing with trolls all day about this.

Google “Third place Starbucks” and see why this should have never happened. It’s bullshit.

What would the “deep state” even be blackmailing Trump with? What else could he have possibly done that hasn’t already been reported? 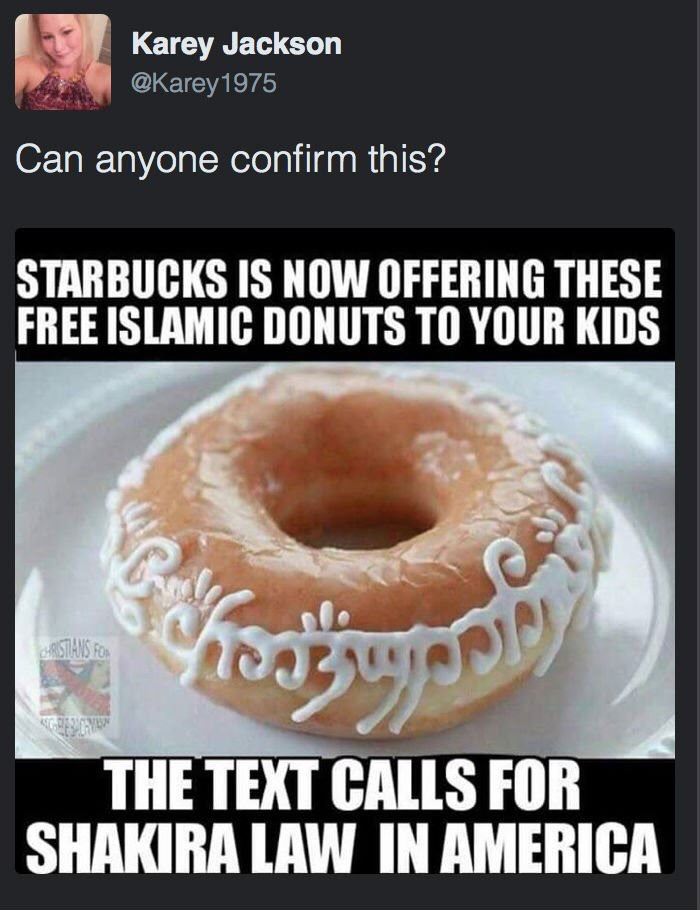 One Pop Star To Rule Them All

@Iseult The Idle
Maybe trump is *gasp* part of the deep state, too?

@weirwoodtreehugger: chief manatee
And what blackmail worthy action could trump have done that his fans wouldn’t dismiss as “fake news”?

@MrsObedMarsh
Apparently not even middle earth is save from “Sharia Law”

@Tovius: it’s not even that. It’s Shakira law, which IIRC refers to a legal system headed by a Colombian pop singer/songwriter.

Now, how can ANYONE look at that Starbucks’s meme, see “Shakira law in America”, and think, “seems legit”?

That donut looks delicious, though.

Apparently “Christians for Michele Bachmann” (the hard-to-see watermark on the donut image) is a satirical group, though obviously Poe’s Law applies.

@Nequam: it definitely does, since it looks like Karey Jackson fell for the meme.

That donut looks delicious, though.

Yeah, but if you try to bite into it, there’ll be a flash of orange flame, a disembodied voice will speak dire words in a dire language, and you’ll fly back in your chair with half your teeth broken. It was baked in the ovens of a particular Starbucks franchise location, and only there can it be unmade.

I volunteer as tribute! I mean—Inshallah, I will take the Donut to Starbucks, whenever, wherever. Though, I do not know the way.

(I think I managed to fit 5 different references into 2 sentences :D)

I’m feeling an enormous nostalgia right now, for those wonderful pre-internet times. There’s so much crap out there, and this post itself is probably part of the crap. Anyone too young to remember, I wish you could have experienced those glorious days.

I imagine that’s how people felt about TV, or the telephone, or printed books, for that matter. I’m rambling, but as an example, I don’t think my grandmother ever got used to having a phone in her house. She attended to its ringing according to her personal whims. I remember my mother trying to call her…my sister and I would do shifts holding the receiver, listening to the ringing, waiting for her to finally pick up.

I wonder what she’d have thought about the internet.

Oh yippee, “Peter Sweden” is now “Peter Norway” (probably since all the guys in Sweden named Peter complained about this doofus hijacking their nationality to spread fascist flibbertigibbertarian bullshit). Unfortunately, the stoopid is still the same.

I wouldn’t be able to eat that donut, it’d go right to my hips, no lie!

I believe ‘Peter Norway’ is a nonawful person whose account name is a mockery of Peter Sweden.

Mm that donut, the power of Shakira flows through me.

MrsObedMarsh, Surplus to Requirements and Jules, you are now my favourite people.

You have my sword, Harry, and may the odds be ever in your favour.

I really do not comprehend the surprise. I thought that’s what they wanted?!

BTW HI GUYS DOES ANYONE STILL KNOW ME?

May you have ALL the pecans! How have you been?

You have my sword, Harry, and may the odds be ever in your favour.

And my teeth. I have been, and always shall be, your friend.

I remember that avatar!