This was the big weekend, folks! The weekend of the historic International Male Issues Conference in London!

Now, it’s true that the event this weekend did not draw a ton of media coverage.

Or any, actually: As of Sunday afternoon, a Google News search reveals that the only media outlet, and I use that term loosely, to report on the conference was Breitbart. Last fall. (The conference got a brief mention in the  Jewish Chronicle online, and someone mentioned it in a comment on The Guardian’s website.) Indeed, media interest in the event was evidently so tepid that the organizers cancelled their press conference at the last minute.

The lack of media interest might have something to do with the fact that the conference organizers — led by political failure Mike Buchanan of the Justice for Men and Boys party — refused to give out press passes to the event, instead demanding that reporters shell out £265 for the privilege of hearing a bunch of idiots talk nonsense about the supposed oppression of men.

Not even the prospect of getting autographs from “Janet Bloomfield” and/or Paul Elam was enough to lure the media there.

But one wily media outlet was able to sneak a photographer into the event — We Hunted the Mammoth, the very blog you are now reading.

And so I present to you these EXCLUSIVE PHOTOS of ICMI16 from our man in London. Who might possibly be a cat.

Wait, is that Tiger Woods? Sitting next to Rod Stewart? With Ozzy Osbourne, Madonna, and Sean Connery behind them? Except that none of them look quite right?

Sorry, folks, I think this is just some picture of a bunch of celebrity impersonators.

Wait, is that Austin Pow…

Never mind, it’s more celebrity impersonators. Besides, I can’t imagine that this many people made it to the ICMI.

All right, that’s just a bunch of dudes dressed as Abraham Lincoln.

And that’s a bunch of people dressed as Albert Einstein. What the hell.

I’m beginning to think that our photographer didn’t actually go to the ICMI at all.

Luckily, one Youtube doofus who did attend the conference posted this footage of some of the conference goers milling around awkwardly outside of the venue.

Ah well. At least that’s more than the zero who attended their conference last year.

Men (who are used to always) Getting Their Own Way

@Brony
Great news! All best wishes in your new job.

I probably shouldn’t have started demanding that Mark, our troll, marry me before I read all the comments. Mark had already disappeared.

I had fun anyway.

@Mark
Just out of curiosity would you like to explain how spending your spare time obsessively posting comment after comment explaining in tedious detail why you despise women so much qualifies as ‘going your own way’?

Well, we UK citizens have a brand new (unelected) PM who is a woman!! Oh, the misandry!
Not that she would ever be my choice of a PM, I’m unashamedly behind Corbyn, despite his maleness, I’m not going to jumping on ‘The Mighty Eagle’s’ bandwagon just because she has lady parts, because she’s a Blairite ‘red Tory’.
Maybe it would have been better to have actioned a snap general election, May vs Corbyn?

Now that women can be drafted in the US shouldn’t these dudes be thrilled?

I believe you’re referring to the National Defense Authorization Act 2017. That bill still hasn’t passed, last I checked. The House passed a version, then the Senate passed a different version. It now goes back to the House to work out a combined Congressional version before Obama gets it. Unless something happened recently…

May I attempt a translation of Mark’s gish-gallop from boyspeak to English:
I want to have sex with any woman I find attractive whenever I’m in the mood, but (a) I don’t want to make any effort to make myself a pleasant or attractive partner and (b) I don’t want to have to deal with any of the possible consequences such as messy emotional entanglement and/or pregnancy, which nature has decreed are matters for women to take care of. Furthermore, I think whining and pouting are a good combination for putting women in an amorous mood.

Be still my beating heart.

@Grumpy
I do believe you’ve cracked the code!

I am having problems finding men who might be interested or able to help with men’s issues too. I posted my ‘survivor service audit’ to the anti-misandry forum and the moderator will not read it. Which means that years could go by before someone else shows up to the thread and actually read the project based on the apparent traffic of that site.

Wait, Python, the language that requires proper (Safe) spaces to work properly, is supposed to be manly? 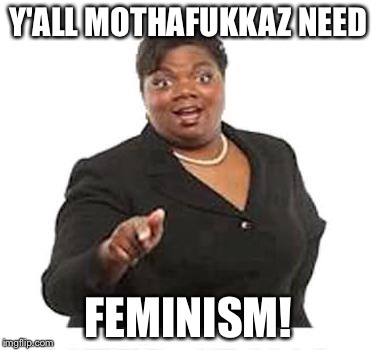 OoglyBoggles:
I’m really late with this response, but wanted to say that I’m glad you have started your journey to kick depression’s ass. 😉

Also, I agree with doing a mood diary. It should help you to see if the medication is working and if it is working as well as you’d like. On that note, if the Bupoprion appears to be working (but not as well as you feel it should), consider getting the “name brand” version (Wellbutrin). There has been some research that shows that the generic doesn’t work as well as it should for some people, depending on which company produced the generic. The one and only time I’ve decomped after starting on Wellbutrin was when I went to the generic, and later found that the generic I was taking was produced by one of the manufacturers that studies had shown were problematic (it had mostly to do with the extended release aspect of the drug causing almost bipolar type symptoms because it didn’t release the medication steadily throughout the day).

Sorry for the teal deer…I swear by Wellbutrin. It literally changed my life. I hope it does the same for you.

“consider getting the “name brand” version (Wellbutrin). There has been some research that shows that the generic doesn’t work as well as it should for some people, depending on which company produced the generic.”

Last I heard the generic version that wasn’t working had been pulled from the market. Either way, as long as the generic is bupropion you should be fine. It’s the budeprion that wasn’t bioequivalent and it was “voluntarily withdrawn” in 2013.

Things could have changed though? As far as I can tell that’s the last word the FDA has had on the subject.