There’s a lot of really good stuff about the whole #GamerGate fiasco on Twitter. Here are several excellent collections of Tweets that have helpfully been put into Storify form for easy reading.

The He-Man #gamergate-rs Club. A collection of Tweets from @a_man_in_black showing that #GamerGate just the latest, if the most virulent, “outburst of a larger misogynist movement going back years.” He looks at the sordid histories of a number of current #GamerGaters and finds that many have been involved in misogynistic and transphobic harassment for years.

The most startling discovery: The creator of the “Beat Up Anita Sarkeesian” game you may recall from two years ago … well, he still hates Sarkeesian, only now he’s a #GamerGater who pretends that he’s against harassment.

For still more on the background of some of the worst in the #GamerGate movement, check out The Bad Apples of #GamerGate on Medium. Also essential reading. You’ll notice some familiar names on the list.

@EffNOVideoGames has put together an amazing account of the origins of #GamerGate, poiting out that the “movement” has always been about spin. Deftly rebuts the notion that #GamerGate is about “ethics,” and provides numerous screenshots offering clear proof of the misogyny that’s been there from the start.

Oh, and if you want to see how serious #GamerGaters are about actually fighting harassment in their movement  — which always seems to be the fault of a few “bad apples” — check out what happened when  @ShadowTodd asked them to show their sincerity by donating money to help the women who’ve been harassed by these “bad apples.” SPOILER ALERT: What happened was a lot of victim blaming and “false flag”-crying and not one penny donated — even when Todd suggested that even if they hated Anita and Zoe and the rest, donating money to then would at least make them look less like the unrepentant woman-haters they are.

There was literally no downside. The only way it would hurt your cause is if your cause was actually… to hurt female VG critics…. OH GOD

Another chilling read: “There is no Virtue Without Terror” On the Ethical Landscape of GamerGate by Katherine Cross (@Quinnae_Moon on Twitter), a researcher of online harassment who has drawn the ire of the #GamerGate crowd.

She reflects on the decidedly mixed performance of the media in all of this, and a bit on her thoughts what it means for her as an academic studying gender, in another set of Storified Tweets, Katherine Cross on the effects of GamerGate.

If you’re on Twitter, and trying to keep up with #GamerGate, I’d highly recommend following @a_man_in_black, @EffNOVideoGames, and @Quinnae_Moon, as well as the excellent @srhbutts.

And of course you need to follow @TheQuinnspiracy (that is, Zoe Quinn) and her dude @alexlifschitz.

Jail would be good too

Another GG-related storify showing them for the shitlords they are:

When the GamerGate mob targeted Anil Dash for no reason.

This isn’t exactly surprising. They’ve been targeting people who got nothing to do with their alleged grievance from the very start after all.

Anil Dash was a target of Roosh and his pals a while ago, partially for racist reasons; Roosh et al were determined to ruin his life, because he was one of the ones speaking up against a tech dude who’s said all sorts of vile shit (Pax Dickinson) and b/c it was a female friend or acquantance of his who first pointed out the terrible shit Dickinson had said.

I don’t recall Cernovich’s role in all that, but he is from that part of the manosphere. So that’s it comes from. GG is just the excuse to attack someone they already hate.

Cernovich is the guy currently trying to re-dox Zoe Quinn and justifying it with lots of gross “Frist Amendment! It’s not illegal!” blah. As if collating a bunch of personal info you have to trawl through court documents to get and then putting it in front of a mob who already hates her isn’t a thoroughly reprehensible thing to do.

And today’s news from the Tweet-argh? Jesse Singal wrote this Boston Globe article a month ago, talking about how GamerGate was wrapped up in a bunch of insecurity amongst gamers and resistance to the industry changing. Predictably, the Gators lost their shit and have been yelling at him in no uncertain terms that he did a shitty job of investigating his story and he should take a closer look at what GamerGate REALLY stands for.

So he did. Guess what? He discovered it’s mostly hatred of feminism and “social justice warriors”. This is using the sources they told him to look at. He also does a good job at that link explaining why any journalist worth their pencil isn’t going to fall for half of the self-serving GG talking points, and that doesn’t make them “anti-gamer” or “SJW shills” – just observant and well-schooled in looking past bullshit window dressing.

On a lighter note, Zoe Quinn tweeted this earlier today: 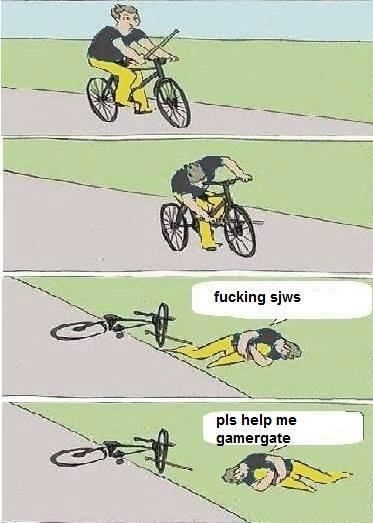 How she’s keeping her sense of humour through all this garbage I’ll never know.

-itsabeast “I don’t get it–why would Paul Elam be a turn-off to gators?” The attempted sanitizing of AVFM website of the unbelievably hateful and violent things Paul Elam has written about women isn’t being done for GGate..but part of a larger smokescreen that frankly David has documented, on this site, far more eloquently than I can summarize…If you just search this site you can find it.

As a further elucidation of “derp”, I offer the following from Paul Krugman, the Nobel Prize winning liberal economist.

I gather that some readers were puzzled by my use of the term “derp” with regard to peddlers of inflation paranoia, even though I’ve used it quite a lot. So maybe it’s time to revisit the concept; among other things, once you understand the problem of derpitude, you understand why I write the way I do (and why the Asnesses of this world whine so much.)

Josh Barro brought derp into economic discussion, and many of us immediately realized that this was a term we’d been needing all along. As Noah Smith explained, what it means — at least in this context — is a determined belief in some economic doctrine that is completely unmovable by evidence. And there’s a lot of that going around.

Apparently “derp” is becoming a widely-used term for various forms of stupidity. I can see where the various forms of “stupid” might be regarded as ableist, but the Mammotheer consensus seems to be that they are acceptable.