Men Going Their Own Way aren’t just ignorant about women; they’re pretty much ignorant on every subject that comes up. Consider this post by MGTOW Redditor lashlightning21, who tries to retroactively recruit none other than Karl Marx to the cause.

It’s going to be a bumpy ride.

Karl Marx was right to some extent. He said that eventually society will crumble to such an extent that only a revolution may be able to stop. The whole society goes in a loop. The oppressers and the oppressed cycle will continue forever.

I think you’re confusing Karl Marx and a ferris wheel.

First there was the slavery ended by civil war, then the industrial revolution exploitation which was balanced by world war and then comes the modern day with the IT revolution.

I’m not sure I agree with you a hundred percent on your dialectical materialism, there, lashlightning21.

The only difference is is that the bourgeoisies/ oppressers are now the feminists and we men are the proletariat/oppressed. A big revolution is coming and this society is going to crumble with a new society being formed.

Let’s see how the war unfolds. It’s most likely going to be a massive reduction in population growth with the decreasing birth rate that the countries have to change laws to convince men to marry and have babies. Let’s see

@Otrame: Thanks for that clarification. Paranoia was where I encountered it. I’ll be sure to check Firesign Theatre out.
@Numenaste: I also played it but once. I got assigned the function of happiness officer. Loved every moment of it, with appropriate gusto.

Just as a bit of trivia, this is the pub where the Communist Party Manifesto was written. Marx and Engels used to do lectures upstairs. Back then, and indeed until quite recently, it was called the Red Lion. I had to do an essay once that featured a bit of Marxism; so I decided to do it at the pub to get inspired. But they had really nice beer; so that didn’t work quite as planned. 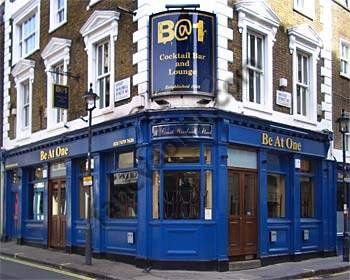 ETA: There’s probably some allegory can be made from this pic.

They apparently still have the plaque though. 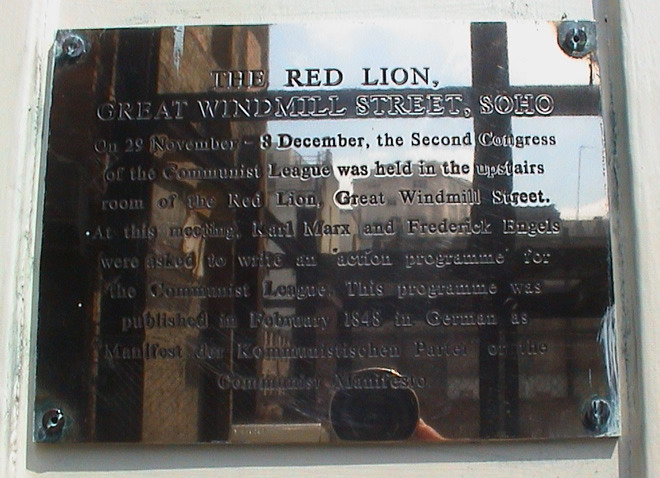 @Full Metal Ox: sorry, I should have specified cis men. Based on experience with the cis men in my life I can’t see any of them signing up for pregnancy and childbirth. Most of them practically needed a fainting couch for the sniffles.

I saw them live in 1993. Still have the nose and pickle. We had been listening to them for years, of course. And still use some of the phrases. Very little freeway driving happens without someone in the car saying “Exit 1/2 mile… exit 1/4 mile… exit 1/18 mile”, and always when in LA, and always always when near The Antelope Freeway. And “In the Late Devouring Period, fish became obnoxious” gets trotted out when watching paleontology. “Read unhappy MAKNAM” when computers fail.

Younger people won’t get all the jokes, but “Oh, he’s no fun, he fell right over” comes in handy, and “Temporarily Humboldt County” is still a perfect takedown of Manifest Destiny and the way the Natives were treated. There are so many jokes that if you don’t get one, just wait, a pun will be along soon. Sherlock Holmes fans will like “The Giant Rat of Sumatra”; hard-boiled noir fans will prefer “Nick Danger, Third Eye”.

Seriously, their first 3 albums are perfection. Two of them were nominated for Hugos. The layering of both jokes and sound design are still unsurpassed.

Wiki points out: “Siri responds to the prompt “This is worker speaking. Hello” with “Hello Ah-Clem. What function can I perform for you? LOL”.

Meanwhile Rod Dreher from American Conservative is spending the summer hanging out in Hungary. Orbanz just recently shut down a state-of-the-art university because the founder, George Soros, was Jewish oops a filthy post-modern Marxist, and has instead invited a new university in, to be built and run by the absolutely non-Marxist government of China.
Rod, to his credit, is somewhat concerned about it, but he turns over his entire column to a government stooge explaining how wonderful this is. In the end, Roddy is satisfied that the Communist Party of China is not a Marxist threat- the real Marxist threat is from woke gay students in America banning Dr. Seuss

@galanx I don’t know why but I’d love to see this shit show unfold, when they may start to get at each other’s throats and hopefully put each other in a less influential position than before.

It’s most likely going to be a massive reduction in population growth with the decreasing birth rate that the countries have to change laws to convince men to marry and have babies.

You always see this type of thinking from them. Especially the doomsday apocalypse daydreaming mgtows that fantasize about society collapsing and women chasing them afterwards. These mgtows want to be chased and want to be wanted so badly. They want women to need them just so they can say no and feel powerful to condemn all women. This guy wants women to be desperate to marry him and have kids but he also hates women, and hates thinking of women as human beings with rights to vote and say no to him. I’m glad these guys are being monitored for terrorism at least, or so Ive heard