A young Redditor called mookg is perplexed: He’s noticed that, contrary to what he’s learned from the Red Pill subreddit, some women seem to prefer dating men who don’t look like big, beefy gym rats. So he turns to the Ask The Red Pill subreddit for answers.

“Why do some women date weak men?,” he wonders.

I have noticed in my social circle, A lot of girls like dating skinny weak men (typical bluepill). My sister also just got engaged to a guy who has 0 fashion sense and just works 9-5 and has never stepped foot into a gym. She is 30.

I want to understand the psychology behind these women as to why they prefer weak men.

Huh. Why might women prefer men who don’t know the first thing about the Red Pill? Might this commonly observed fact suggest that perhaps the Red Pill is not the infallible guide to female psychology that its practitioners claim? Maybe some women don’t want their partners to be alpha male assholes who live in the gym and spend their time strategizing online about the best ways to dominate and manipulate them? Maybe life is not a Charles Atlas cartoon?

Nope. According to the Red Pillers on hand to answer the question, a woman’s lack of interest in alphas just means that there’s something deeply wrong with her, not with the alphas she’s rejecting.

“[W]omen only date up,” responds someone called reduxDev.

The women you are discussing in this post are losers. …

A good amount of women actually avoid superficially attractive men because its obvious they have options. A guy being hot/cute, fashionable, or jacked can deter women seeking monogamy from even trying.

“Some women are just masculine inside and they want a weak man to dominate,” declares Stoic-Alpha-01.

“A lot of women don’t like the high maintenance of HVMs [High Value Males] and don’t want to compete with other women,” adds Noodlesoupe2.

These women usually are control freaks and like being above their man so they have absolute adoration and control. It’s an ego boost.

Or maybe there’s something wrong with the men, and the women in question just want “[p]ussies who give away their money and material things,” as one commenter puts it.

“Some of these men start off strong and then are slowly broken down to becoming weak,” explains kclanton80.

[O]thers are chosen specifically cuz they’re weak because the woman can control them and exploit them for their resources.

Or, I dunno, maybe some women think “alpha” dudes are self-centered, misogynistic assholes and would rather date someone as far from “alpha” as possible? Or maybe they just prefer skinny nerdy dudes to jocks?

Nah, couldn’t be that. These women have got to all be a bunch of losers and ball-busters.

Thanks for the comments concerning visible ribs. It’s not a thing I like to ask in face-to-face conversation (particularly since last time someone saw my ribs casually, their reaction was to go “I can see your ribs!” and then proceed to pretend to play them like a güiro, which was… strange).

Never heard of that one, and my ribs have shown all my life.

Sorry if it seemed to come out of the blue. I should’ve mentioned the header picture prompted the question. I very rarely hear about this in person, just sometimes run across it when someone complains about models having visible ribs. (Obviously people can be dangerously thin, it’s just weird to me that people sometimes concentrate on the ribs thing.)

@Penny Psmith
Thanks for the guess regarding the Timo thing. That would never have occurred to me since I couldn’t get past the Finnish pronunciation.

If it’s any consolation, visible ribs is something that crops up a bit in bodybuilding; no end of people panicking about them.

But the simple fact is that people of all sizes can have them. It’s not an area where you can put on that much muscle; regardless of how much you work on your core.

(If you want to minimise the appearance in competition or photos; apparently the trick is to puff your chest up, not out.)

And as we were talking about Arnie up thread (someone using him to make the point; hence the arrows)… 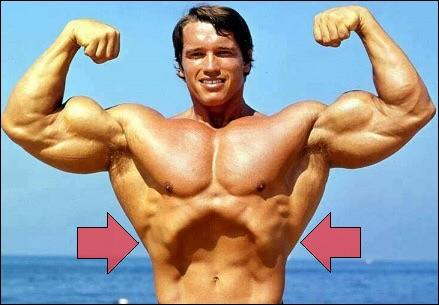 Part of what’s going on is related to our extreme societal fatphobia. Historically speaking, healthy people who got enough to eat were expected to have body fat, preferably in a layer thick enough that none of one’s bones were visible through the flesh. Having negligible body fat is actually quite bad for one’s health, and leads to notably increased mortality rates.
I speak from some degree of experience here, prior to starting HRT all of my bones except my thighs were visible against the skin, and no amount of calories would change that. My heart’s still paying for those days. I’ve put on 70 lbs (32 kg, 5 stone) since then and I’m doing notably better, and I can go outside in the wintertime with neither five layers of sweaters or imminent hypothermia.

I’ve pretty much always had visible ribs. Never was a problem, but like I said in one of the other threads on here, amusing to have people who couldn’t compete with me in most physical activities and happily considered McDonald’s to be a food staple would pronounce me too skinny and unhealthy.

Reminds me of that flap about some celebrity’s kids a few years back. They were pictured shirtless at the beach and everyone was freaking out about them on social media about how their parents were starving them. Looked like me as a kid, and looking at pictures from more than twenty years ago, I really wasn’t that unusual. But apparently, these days, if you are ten and don’t have a muffin top, you must be starving I guess.

In my case, I’m skinny most likely because I have very high metabolism rates, which I inherited from my mother’s side of the family. AFAIK I haven’t had any negative side effects as a result to date and no doctor has found anything to be wrong with me as a result of my weight, so I don’t think it’s an issue.

Last edited 1 year ago by Naglfar

It’s fine – it just surprised me a bit at the thought that someone would say it to another person’s face. Behind their back, sure – people gonna criticise something.

@Alan
Thanks, though my ribs aren’t really an issue for me.

That picture does remind me of a budo instructor I had way back. He was almost gleeful when he explained about a blow that was meant to target the ribs, since there’s no muscle there and they’re pretty unprotected. It didn’t seem very sporting to me, which is probably another good reason to hope I’ll never have to defend myself physically.

An Israeli Krav instructor made a point about hitting ribs “like they’re a xylophone”.

There is a useful technique if someone is on top of you where you run your knuckles up and down the attacker’s lower ribs to distract them before making a move. It is really uncomfortable.

It didn’t seem very sporting to me

Well, self defence of course isn’t meant to be sporting. “If you find yourself in a fair fight something went wrong with your plan” and all that.

We always bring up that thing of “There are no rules in the street”.

The best response I heard to that was “I can tell you from experience there’s definitely one about pissing.”

Well, self defence of course isn’t meant to be sporting.

In my defense, this was first introduced when we were doing kata and there was a move we hand’t yet covered in basic technique training, so the context was a bit different.

Also, the instructor didn’t actually say to hit the ribs but to try to envision your fingertips puncturing the skin between two ribs, hooking your fingers behind one and pulling it out, which was veering pretty far from the thing that particular kata actually called for. It was less “oh, that’ll be neat in a pinch” and more “lol, this guy”.

try to envision your fingertips puncturing the skin between two ribs

“There’s only one way to settle this!” 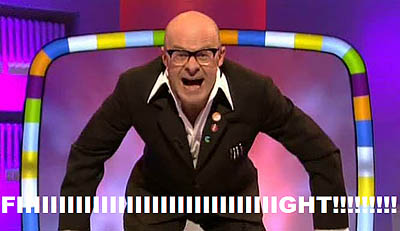 (Hopefully that’s not too Brit-centric!)

An instruction booklet we had pretty literally said “people usually wear clothes”, so I’m pretty sure he just wanted to give us a gory visual to remember it by, since there was nothing on how to puncture keikogi, t-shirts or winter coats with your fingers.

Re: the fight, my only move will be to throw random s’s, c’s and z’s to see which sticks, since English spelling is a bit of a dark art in my eyes. My use of italics wasn’t to highlight the spelling, I was just trying for a short way of showing I thought there was a pun there.

Sorry if it came off as snooty.

Sorry if it came off as snooty.

Oh not at all; don’t worry! I was just being silly.

And clothes are an interesting one. We make a thing of training in our regular clothes. After all that’s what you’d be wearing in a real situation. And if people are in heavy trenchcoats they’re like armour. They could take the impact out of a baseball bat. I also learned that you don’t want to take a stomp kick to the nads from someone wearing high heels.

So these men have a problem with women wanting physically attractive men but also think negatively of women who don’t go for the typical gym buff male? Make it make sense. They just hate every kind of woman.