Men Going Their Own Way love to talk about science. Too bad they don’t really understand how it works.

Here’s one young MGTOW Redditor’s stab at a biological explanation of the mysterious creature known as the woman.

Kind of a double fail for Mr. AlwaysResist here, in that this is not only not how women work but also not how viruses work either. Viruses don’t attach themselves to host cells like a lamprey and suck life out of them; they inject themselves into host cells and take them over in order to make more viruses like themselves. (Also, they aren’t technically living organisms, more like tiny self-replicating robot monsters.)

To show what would happen if women really were viruses, I’ve taken a basic description of how viruses work from here and replaced the word “virus” with “woman” and “host cell” with “man.”

When she comes into contact with a man, a woman can insert her genetic material into him, literally taking over his functions. … Some women may remain dormant inside men for long periods, causing no obvious change in the men (a stage known as the lysogenic phase). But when a dormant woman is stimulated, she enters the lytic phase: new women are formed, self-assemble, and burst out of the man, killing him and going on to infect other men.

Here’s Laurie Anderson’s classic song “Language is a Virus,” not that’s it’s really relevant, but just because it’s been playing in my head ever since I ran across Mr. AlwaysResist’s post.

H/T to @sbassi (and several others who shall remain nameless) who served as biology consultants for this post but who are not responsible for any wrong stuff I might have said in it.

I always think there is no way they can get any more idiotic, and they always prove me wrong, in spades.

The miggies and incies’ biological ignorance always brings about hilarity. I love it when they talk about human reproduction, for example. It’s also amusing when they insist on living a wimmin-free life, then proceed to talk about nothing but women.

“The only way they survive is because MEN have created an environment where stupidity thrives.”

You’re not doing any favors on behalf of men by saying that.

I think you’re mad that even though you try everything in your power to bring women down, they still brush you off like it’s nothing. That must really sting the ego. XD

Men have created an environment where stupidity thrives.

In which a MGTOW shows his complete ignorance of both biology and history.

men have created an environment where self validating stupidity thrives!!!

When she comes into contact with a man, a woman can insert her genetic material into him, literally taking over his functions. … Some women may remain dormant inside men for long periods, causing no obvious change in the men (a stage known as the lysogenic phase). But when a dormant woman is stimulated, she enters the lytic phase: new women are formed, self-assemble, and burst out of the man, killing him and going on to infect other men.

“ALIENS: THE MISANDRISM” coming soon to a theater near you….

Oop, he’s on to me — I’m just a tiny shred of RNA in a protein shell. Thought I could get away with it by standing on the shoulders of a million other viruses and throwing a trench coat over ourselves.

So they’ve moved on from “Girls have cooties!” to “Girls ARE cooties!” Somehow, I’m not even surprised.

Sounds like migtoes to me. I mean, do any of those dudes actually do…ANYTHING? Other than squat on the internets kvetching about women all day? Probably while their two-job-working moms dutifully shovel crates of Cheetos and energy drinks in and crusty wank-socks out?

I’d been under the impression that it was people with outside plumbing who injected their genetic material into people with inside plumbing to reproduce–a process sometimes resulting in the death of the host, particularly given insufficient prenatal care or an author who wants a character to grow up motherless.

I should think the feminist hivemind is more like a bacteria colony, but ok.

Weird (and tired of trumplings) Eddie-I would totally see that movie.

Full Metal Ox-Well, these people do believe that women produce mind controlling vagina goo, so their understanding of biology is more than a little off.

If Rod Serling were still around he’d probably do a Twilight Zone episode where a bunch of MGTOW etc. types suddenly find themselves in a world with no women. The episode would show how they quickly went from joy over their victory over women to the complete collapse of their new society. As the episode progressed there would be a timer in one corner of the screen, and the elapsed time for the events of the episode would probably be less than a week.

Oh man, those grapes must be really sour.

Wouldn’t OPs analogy fit better for parasites than viruses?
(I am not surprised about the biological illiteracy though, MGTOWs have sofar been very consistent in their utter misunderstanding of most things science related)

…the word that fits the definition you gave is parasite, not virus.

I’m guessing that you’ve heard women being called “parasites” before, and you wanted to sound all new and creative and edgy and shit, but in typical MIGTOW fashion, you’re too stupid and incompetent to actually come up with something new and creative and edgy, so you just took someone else’s rant, replaced the word “parasite” with the word “virus,” and honestly believed you were being brilliant.

By this point I consider “bring to the table” a reactionary tell. I’ve always found the expression icky. Its sentiment is openly and crudely transactional and materialistically banale in a way that wasn’t acceptable in the Finland of my childhood, back when we weren’t a hypercapitalistic neoliberal culture yet. On top of that about 99% of the times I’ve ever heard it used has been by reactionaries in service of inhumane assholery of some form or other. Usually MGTOW or incel types going on about women. And they do use it a lot. I suspect they’ve all learned it from each other and it’s the only idiomatic expression any of them know for roughly the same thing.

Does anybody know if these doofusbrains have read “The Screwfly Solution” all the way through?

What they WANT is affirmation.

Women are only relevant as a target. The target is attacked, the “in-group” responds with positive feedback, the “other” responds with outrage”, and affirmation is achieved. It’s almost like… the president… and his base…. Hmmmmm….

Anyways, the mgtow/mra/incel could do the same thing with flies as the target instead of women, but in that case, the “in-group” (fly-haters) is too big and the “other” too small to generate the amount of emotion necessary for trumpian-level affirmation.

This is NOT to say the migtow/mra/incel doesn’t really hate women, though I wonder sometimes if they really even know. Sadly, there is a large, easily accessible community of misogyny to tap into for people (well, men, really) who want to gain affirmation this way.

…and here we have the anatomical diagram of the the common woman, with her large capsid head, ready to inject her DNA instructions directly into a host organism with the aid of her several spindly tail fibres: 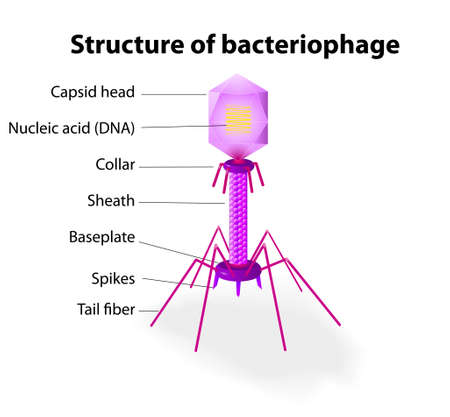 And a part of me wonders if somebody has done Rule34 with a bacteriophage.

Did get me thinking though… I’ve started playing Star Trek Online just because I figured it would be fun to run around the Star Trek universe (huuuuge Trek nerd here) and it did kinda strike me that while most of the species conform to humanoid dimorphism… not all of them do. I’m playing an Andorian, a species which has four distinct sexes (although what appear to be only two genders), all of which are necessary to procreation. My character is a shen (one of the “female” sexes).

Even so, even Star Trek didn’t handle gender issues particularly well, especially that one TNG episode with the androgynous species (or the godawful Angel One). Farscape had a couple more interesting ideas mixed in with the ludicrous “all females of all species must have boobs” thing: https://tlshbnw.wordpress.com/2014/08/14/alien-sexes-alien-genders-examples-from-farscape/

Still probably my favourite take on it: 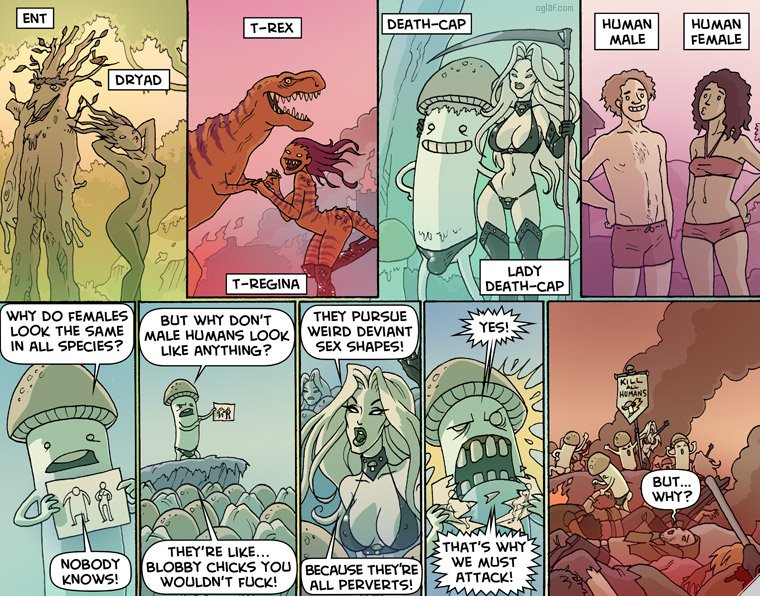 Women are like viruses. I don’t know anything in particular about them and have formed my impression out of a dim and incomplete memory of the original Matrix movie.