The Spring 2018 WHTM pledge drive is on! Go YOUR own way by donating generously! Thanks!

Do MGTOWs hate women? It’s not a difficult question for most of those who’ve ever encountered the MGTOWs to answer. (The answer, by the way, is “yes.”)

We can see this, er, tension play out in the following two comments from the Men Going Their Own Way subreddit. Call it a Tale of Two MGTOWNs.

In a recent thread devoted to the (more apparent than real) differences between so-called MGTOWs and so-called Incels (“involuntary celibates”), a fellow called Ed_Moy insisted:

MGTOW is a peaceful walking away from co-habitation, dating and relationships with women. We realize the game is rigged to our disadvantage, so we choose not to play anymore and focus on making ourselves better versions of what we currently are. There is more to life than just fucking and marriage and kids and the “white picket fence” life.

INCEL’s are bitter and furious that the game is rigged and have stormed off, preferring that the game change so they can enter it again with an advantage in the dating and relationship realm. They want to fuck and are mad they can’t or it’s so much harder to do so in today’s climate.

HUGE DIFFETENCE between the two.

MGTOW is peace, we don’t hate women. We feel sad that both genders have been sold a bad bill of goods on how life works in 1st world cultures, and are walking away from it all to find a better path in life.

This comment got a positive response from the r/MGTOW regulars, earning 22 upvotes.

Some months earlier, a MGTOW calling himself ancap-biochemist had a rather different story.

Ever since embracing misogyny my life has become something I can be proud of. My career has taken off, I’m in great shape, my finances are solid, I’m more well rested, better fed, my sexual gratification became better*, I’m more focused, happier, and more philosophically grounded in reality.

Mr. ancap-biochemist then took what he called “a quick digression into celibacy/no-fap” that involved discussion of the “sperm retention thing” that I think we can safely skip because ew.

Returning to the topic of hating women – it is the best thing to have happened to me because, I think, that women are a disappointment regarding virtues. They’ve been sold as a panacea for all of men’s ills (she will civilize you, make you food, clean your house, give you a moral foundation, massage your sore muscles, listen to your problems, blah, blah, blah). The Woman TM wonder-drug is like heroine [sic] … pretty soon you’re spending all your time and money supporting a drug habit.

And, make no mistake, love is a drug. Love will blind and stupefy a man into taking a bad deal.

Think about the following; nature endowed men with a survival advantage for using their wits in a hunter-kind-of-way. …

The love-drug lowers a man’s IQ to that of the woman (or lower). All that beautiful women see are idiot men. When the men leave the women they become expert hunters and survivors who have brought nature herself into submission, and cracked the very atoms which constitute the [or “a”] fabric of our material existence. Men are smart, but not around women.

Hating women has reversed that weakness which was required to continue the species.

Hating women has made me a stronger person… because, let’s face it – there’s a lot to hate, and women make you weak. …

Women love powerful men, and fuck them readily… and if a man (unburdened by women) is free to excel due to his natural advantages and without his natural inhibitions … then he becomes the “alpha” male – women reactively lubricate their vaginas and accelerate ovulation toward the man who has become strong thereby, and their husbands become jealous. …

The freedom and strength is too great of a reward not to raise a middle finger toward those cucks and tell their whores to fuck off.

My life is too great to give up. And hate (toward such an ugly thing as woman/white-knights) can be the most healthy response a man can have.

This post also got a positive response from the r/MGTOW regulars, earning 94 upvotes.

In other words, MGTOWs seem to agree that they both don’t hate and do hate women.

Let’s just split the difference and say that they really fucking do hate women.

Maybe the guy is actually her hair stylist? He’s sick of her weird prehensile hair, which is nothing but trouble.

Or else it’s creating a hook so that the seagull can pick her up and fly her away from the oddly proportioned golem yelling at her. 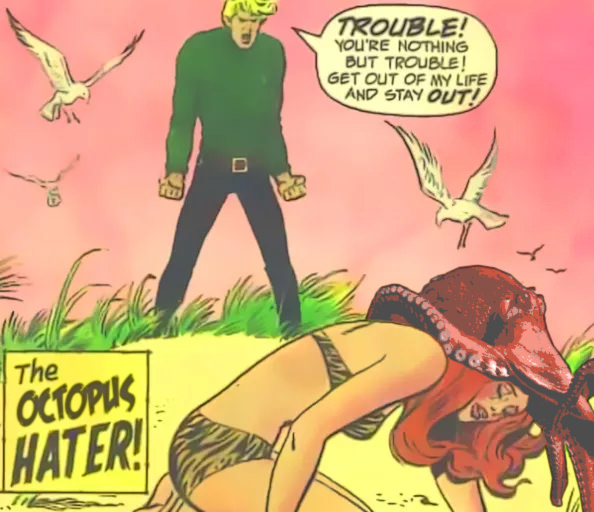 What the fuck is that golem’s problem? Octopuses are awesome!

incels and sexbots and Douthat…

They say they don’t hate women, they just think we’re naturally inferior creatures and that telling the “truth” can’t be hate. But most of their theories have no real backing. Of course the don’t, we all fucking know this. But they don’t. And those same men will continue on about how illogical women are, while being illogical. They aren’t even capable of seeing how hypocritical they are. It’s kind of sad, and frustrating when you point it out and they refuse to acknowledge it.

Since this is a recurrent issue, let’s make it way more simple and avoid misunderstandings such as the misrepresented Ann Kah quote in the comments above: it’s called the “sour grapes!”-strategy. You know, like in the fable about the fox and the grapes.

If he was told, “she will civilise you, make you food, clean your house, give you a moral foundation, massage your sore muscles, listen to your problems, blah, blah, blah”, then it’s no wonder he’s fallen flat.
He obviously never thought that perhaps he might have to learn how to civilise himself, make his own food, clean his own house, give himself a moral foundation, and perhaps see a physiotherapist and a counsellor for those sore muscles and venting his problems before he thought about pairing off with a woman or anyone else.

In the environment that I grew up in I was always taught that a girl needs to do these things on her own and to be improving on these things before, and while, she is dating/married, because if not, and she is expecting a saviour, she has left herself open to abuse.

I think some of these men have legitimate grievances towards individuals and the situation they’ve ended up in, but they have reacted in a very, very bad way instead of one that is self-reflective and constructive and also loving to oneself in a way that doesn’t hold onto grudges for the wrong choices they might have made.