Another sickening attack, this time in France (again) as the driver of a large truck, seemingly deliberately, plowed into a crowd gathered to watch Bastille Day fireworks in Nice, France. As many as 60 people are dead, French media is reporting, and many more are injured. [UPDATE: The number of deaths is now reported as 80.]

As I write this, details are still scarce, but it certainly appears to be an act of terrorism.

Here’s an open thread to discuss this and share information. No trolls, MRAs, alt-rightists, etc.

This is a monstrous act of hate.

Adding more hate is not the answer.

Honestly, when my first reaction to this humorous tweet was “Oh great, does that mean someone’s going to ram a jumbo jet into a national landmark?” you know it’s just not a good year.

Truck deliberately driven into crowd.
Driver then starts shooting.
Police shoot driver.
Two other possible situations in East and West of Nice.
Prefect reports 73 deaths but only 30 confirmed so far.

What shocks me is that I find myself not even really reacting to this. Am I really getting so numbed to mass violence? Scary stuff.

I hope that all Mammotheers and their loved ones are safe. Everyone, make sure to tell your loved ones that you love them.

Check-in from our French Mammotheers? Ohlmann, Occasional Reader… Who else?

I don’t often cry when reading the news, but when I read that the driver had driven 2 kilometers through the crowd, I burst into tears. I saw photos of the street just before it happened and there are people everywhere. How could someone do that?

ETA: It’s now being reported that the truck was loaded with guns and grenades.

And here I just noticed the date and was going to wish our French Mammotheers a hapy Bastille Day. This fucking year. I need to go check on my French friends on FB. 🙁

My thoughts are with the bereaved, the survivors and their loved ones.

At time of writing, we don’t know exactly what this is, so shame on the politicians (any politician, but yes I’m thinking of Trump) who are seeking to make mileage out of it.

According to the Guardian:

Trump tweeted: “Another horrific attack, this time in Nice, France. Many dead and injured. When will we learn? It is only getting worse.”

He should be using his telepathic abilities to support law enforcement.

No….
What is happening

I’ve come to a point where I just assume this will never stop. How can you possibly ever neutralize every threat? And in a day and age when recruiting for a zombie murder cult is as easy as creating a few dozen burner Twitter and YouTube accounts, of course the most radical, violent, hateful people in the world will spread the curse of their existence around. Isn’t it interesting that as we have solved the big issue of communicable biological diseases, it seems that communicable ideological diseases are just rising to take their place? And what’s worse: a few thousand kids dying each year from an awful virus or a few thousand kids dying in each year in terror attacks?

I dream of a better world where people do not hate and kill and call it doing the work of god. However, I do not know the way to make that dream reality. I believe we live in a time when, more than ever, great leaders are needed, men and women who will dream at a global level, who will tell stories that build up people and break down walls, and instead we have liars and hateful, thin-skinned man-babies attempting to take the highest offices in the US and UK.

Moment like this leave me feeling desperately hopeless, and then that hopelessness turns to anger on a low simmer because I realize that hopelessness is EXACTLY what Daesh/ISIS/ISIL/whatever those assholes are calling themselves *want* me to feel, want us all to feel. And then I don’t know what to feel. Every time an attack like this is carried out, the perpetrator kills himself or sees to it that the police kill him.

Maybe the solution is to develop some kind of long-range non-lethal device that will knock the terrorist out, allow us to imprison him, educate him, feed him, let him experience life without constant trauma and abuse and see if he would be willing to repudiate his former acts of violence internationally. I suppose that smacks too much of the old Soviet practice of torturing a “confession” out of someone. Damn. Toxic nationalism and the Modernist worldview has ruined everything. So much hate in the world.

I mourn for you France. I know all too well what Bastille Day means for you. May time bring healing to you, my friends, and may you find your peace sooner rather than later. Blessings of peace and joy to you amid the strife and the carnage. Be well.

Much love to everyone over there.

I have a friend from Nice. He’s still waiting to hear from his friends and family back home. I hope all our French friends here are all right.

I have a friend from France who had to log off earlier yesterday to go watch the fireworks. I don’t know whether she lives in Nice, but I do know she lives in the south and close to the sea.
I’m…reasonably worried.

Trump tweeted: “Another horrific attack, this time in Nice, France. Many dead and injured. When will we learn? It is only getting worse.”

Trump is a Garbage Elemental summoned by a level 40 warlock. That is the only logical conclusion I am able to reach. The Daily Show called him out on his horsecrap about how he “called it” on #Brexit. He was asked directly like a week before the vote what he thought would happen, and he waffled, argued both sides, then said he thought no one should really listen to him about it because “I haven’t really spent the time because it doesn’t effect me, and so I really don’t know.” But that didn’t stop him from crowing and preening about how he predicted #Brexit a few days later at a rally in Pennsylvania.

Do you think he is genuinely a moron? Or is he quite aware of what he’s doing and therefore far more dangerous? I honestly think it’s the latter. I used to think he was a moron, sort of how everyone used to think George W. Bush was a moron, but Georgie Porgie had quite the education actually and it seems his stupid persona in the Oval Office was somewhat of an act. I think Trump is pulling a similar stunt. Why? I saw an analysis done of a bunch of his speeches a couple months back and it found very intentional usage of 2 and 3 syllable words max. If ever he was forced to use a word that was longer (e.g. “California” after the San Bernardino shootings) he would load a lot of very low-level vocab words around it to make the sentence easier to swallow.

What he is doing is spoon-feeding his words to people at a level that undermines intellectual engagement. Does not at all surprise me that we see so many of the knee-jerk reactionary crowd lining up to raise their outstretched right hands to salute him Reich-style. Yikes.

P.S. I think the DM’s guide specifies that a Garbage Elemental, when summoned by so powerful a warlock, is capable of casting “Abominable Utterance” 1d10 times per week. It makes sense as you start thinking about it. The only question left is: who is the warlock????

As usual Donald Trump is full of shit.

Terrorism in Europe isn’t getting worse. Since the 70s the number of terrorist attacks has actually declined. 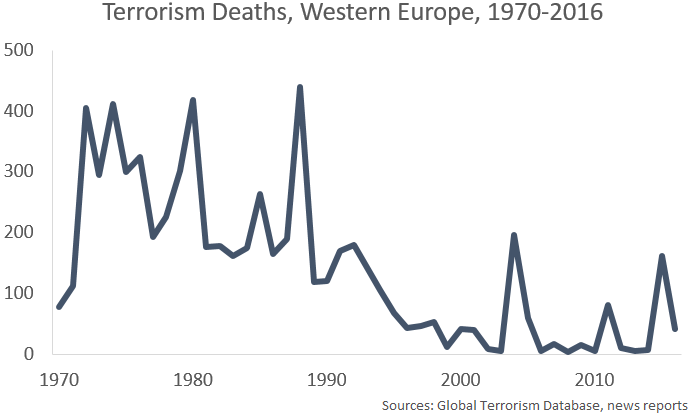 Terrorism has always been a small problem in human society, swimming pools kill more people then terrorist do, and overall it’s a shrinking one. The problem is that we keep freaking out about it and have lost all sense of perspective about it.

Jeez can we call it a day for 2016 and start again with 2017? This is appalling and sad making. And fuck you Trump for trying to make political capital out of it. You want to be a statesman? Fucking behave like one.

This is horrible. I feel numb and sad at the same time. Here’s my small attempt to show solidarity with the people of Nice and of France as a whole.
https://daytondolls.wordpress.com/2016/07/15/solidarity-with-france/

How horrible!! I thought 2016 was going to be better than 2015, looks like I was wrong. 🙁 I am not a religious person, but I hope those who are responsible for this hateful act burn in hell for what they have done. It is sickening that they decided to run over and shoot at hundreds of innocent people enjoying a peaceful celebration! It is not the first time they have done something like this, either. I am really angry at ISIS right now! I hope they get eliminated once and for all. They are making the world dangerous for everyone.