Incels, if they think about politics at all, tend to lean right — pretty far right in some cases. But there’s a distinct, if relatively tiny, bunch of incels who claim to be leftists and even Marxists. Let’s just say their version of Marxism bears little resemblance to the original flavor.

In a post titled “I think I got brainwashed into accepting the communist ideology through the most weirdest ways,” TheIncelRepublic offers his own supervillain origin story, which involves, among other things, an unused air conditioner and a sucky boss at PizzaHutCuck.

Back in the old days, he explains,

I actually fairly liked Capitalism and was not a commie.

That changed when I starting preaching “sexual communism” and calling for the redistribution of the means of reproduction (foids).

Slowly I started going down the “left wing rabbit hole”, I started listening to commie music and eventually got brainwashed a bit by the comment section.

Then my boss stopped using the A/C in the Pizza Kitchen in the middle of Summer (because he wanted to save bills) and started cutting many wages as possible. (I work as a wageslave at PizzaCuck).

Then while I deliver pizzas at Pizzacuck, I started delivering at rich places were Chads and Stacies were having parties.

I also was lurking in Tankie [Stalinist] forums such as /leftpol/ and found how based they were.

All this with other shit turned me into a commie. Although I am more of a nazbol, social democrat, strasserist or mutualist at best, I wish the Soviet Union came back and destroyed degenerate America to the gorund.

These days his posts on TheBlackPillClub are a mixture of incel obsession and weirdly repurposed Communist slogans. His vision of the socialist utopia involves women being treated as little more than “commodities that are for exchange.”

He and his allies, he promises, will

seize the means of reproduction (foids)! We have [nothing] left to lose but our virginities! Down with Sexual Bourgeoise (Chads) and the Sexual Kulaks (Cucks and Simps)!”

To be a truly convincing Marxist one should probably be able to correctly spell “bourgeoisie.”

He dreams of a “planned sexual economy” in which there is a “foid” in every man’s dacha, doing all the chores.

This is why Sexual Communism works, simply put, women are commodities. The more women a man can score, the more he will spread his genes and win the game of life. By having a planned sexual economy, the state can provide every male with a fit fertile woman for them to breed with and do all the shit for the men like cooking and cleaning. There is enough women for everyone and Chads are hoarding all the women.

Time to seize the means of reproduction!

TheIncelRepublic believes that the “(((sexual capitalists)))” — that is, the Jews — have been experimenting on the black community in order to see what happens when women have too much power over their own lives — that is, they have the same basic rights as men.

The African American communities are a good example of what happens when you let your women go out of control. We know the (((Sexual Capitalists))) tested free market dating to see what will happen and it fucking worked. Now they are trying it on everyone else. …

If you remove feminism from black communities, thug culture and crime will disappear overnight.

Most incels, while generally on board with the idea of “sexual redistribution,” don’t see themselves as communists of any kind. Indeed, one incel has written out a detailed “rebuttal” of TheIncelRepublic’s incelcommunist manifestos. It’s quite possible it will be the worst thing you read all day (or week). According to LiveFromInferno,

When you find out that fembots [women] are nothing but means of reproduction, a resource, and also happen to be incel, it can be tempting to embrace “sexual communism” and wait till gfs belong to everyone. I’m going to make a case that it’s no solution to inceldom.

Communism is what you get when private property is gone, with production and consumption of resources socialized; everyone gets their equal “free” share.

In case of cumdumpsters, private property is demonstrably gone because this is what culture (=patriarchy) was about. The cultural coverup for it was that we as a society were giving the holes the right to choose for themselves, but it was doomed to fail for lack of hole agency, which it did as fembots base their lives around the top 1-20% of men (chads). …

Another major problem with communism applied to rapemeat [women] as means of reproduction lies in the name: they do not produce sex, they produce babies. In our stage of development as a species we do not equate babies with sex. As such, for a lot of men sex isn’t means to an end which would be reproduction; to them sex is the end …

This alone for me is enough to say that sexual marxism doesn’t solve inceldom in that it doesn’t guarantee ascension at all, at times making it way harder, and also it skews the reasons why we see incel as a problem in the first place.

The right way to tackle inceldom and many more social issues is to recognize private gfs as the human right that it is, repeal fembot suffrage and restore the property rights on fembots.

In this battle between “Sexual Marxists” and “Sexual Capitalists” both sides are so transcendently awful that I can only hope they both lose, the more ignominiously the better.

@Masse_mysteria : I suspect the problem with bourgeoisie is that it’s not an english word. So the spelling is unnatural for non-french speaker.

As for “bourgeoise”, it’s a word. It’s either a female bourgeois or the wife of a bourgeois, depending on context.

I love that there is a National Dormouse Monitoring Programme, and wish to subscribe to their newsletter.

Holy cow. Can you see Russian intelligence officers in 5-10 years? “Hi, boss? Yeah, we have another fool who wants to commit high treason for access to American women. I mean, we’ll give him enough rope to hang themselves…yes, ma’am. Thank you, ma’am.”

Read the Dutch article and it doesn’t seem to be anything like sex redistribution. Just private groups that arrange sex for the disabled and disfigured, which they see as a kind of sex therapy. The core point is less “sex is a right!” than “it’s good for people to experience intimacy”d

I don’t think giving the disabled and disfigured pity sex is going to help them. That isn’t intimacy. That’s sex you could get by paying a sex worker. Sure, they will probably be nice to you while it’s going on, but it isn’t intimacy, intimacy comes from love and companionship and trust. Yeah, it’s good for people to experience intimacy but what they are proposing is a lie.

I read pretty recently something about how here in Finland, if you have a right to a personal assistant or such due to a disability, your personal assistant can help you with sex, e.g. by helping you and/or your partner to get into the position you need to be in.

I remember being a bit puzzled about the “sex is a right” angle, since it seemed more like just having a right to getting help doing the things you want to do, especially since it was stressed that it’s something you need to negotiate with the assistant(s) you have and make sure they’re comfortable doing it.

“Who controls the means of reproduction?” was the title of my aunt’s thesis about women’s experiences of abortion in some communist state. I want to say the DDR but I could be wrong. It sounded fascinating but I never made the time to read it. I was always impressed with that pun and it makes me sad to see the terrible people soiling it like this.

The Bolsheviks were accused of exactly this in the 1920s, and replied that they didn’t actually regard women as property…

Ah, of course he’s a nazbol. Nazbols (‘national bolsheviks’) are fascists play-acting at being Marxists. 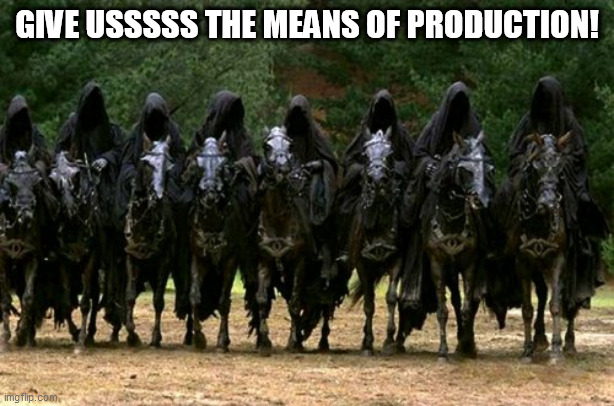 To be honest I don’t know how to spell “bourgousise” either. But wow, it’s really amazing to me how I’m still surprised at the utter lack of humanity they see in us. It’s like we’re not even real. We’re basically the same thing as a chair to them.