Safe and Happy Thanksgiving, to all those celebrating it! Enjoy a lovely dinner with your special COVID buddies. And be thankful i didn’t use the Eraserhead chicken gif I was thinking of using for the graphic here.

So a sequel to Ready Player 1 is out

Seriously? I haven’t seen so much as a single trailer, and I usually have a TV on tuned into a sci-fi channel as background noise around here for hours every day.

So, what have I missed now because of the damn virus? Black Widow; whichever MCU film was originally supposed to be out this fall (was that Shang-Chi?); and now Ready Player Two, or whatever the sequel is called … And counting. For each of which I’ll have to wait an extra year or so for the Blu-Ray, and meanwhile cross a minefield of potential spoilers whenever I go online. And by the time I finally get to see one of them, there’ll be another one meanwhile that I missed, so the minefield will not become safe again until a year after the vaccine has become widely available. And that’s on top of the minefield of I-might-actually-catch-the-virus whenever I do go out …

Meanwhile, in countries like Finland and New Zealand that have been able to more or less stamp out domestic transmission of the virus, people are enjoying normal life and missing out on nothing.

What really galls me is that until about mid-August Canada was on track to domestic eradication as well, and then … I don’t know exactly what happened. Somebody changed something, and unless it was a mass shift in the behavior of the entire populace, it must have been a decision made by some higher-up somewhere. And the case numbers, down to double digits in most provinces and a few hundred Canada-wide, stopped shrinking and started growing again, and now it’s basically running rampant throughout the country.

I would very much like to have been consulted on the August Decision. Instead, I don’t even know what, exactly, this decision was, other that that it was a very big mistake, and that whoever made it should be strung up by their toes with their eyelids taped open and forced to watch endless reruns of Andromeda, Earth: Final Conflict, and every other terrible failed attempt by Gene Roddenberry to duplicate the success of Babylon 5. With the final two seasons of each of BTVS and Smallville thrown in. And Star Trek: Enterprise.

@Numerobis: Aaaahhh, turkey is OK. I’d rather have a pork roast, tho. One year I just cooked a turkey breast, following a recipe for ‘herbed turkey breast’. It was pretty good… the herbs jazzed up what, to me, is a bland meat.

I like the traditional Thanksgiving side dishes. I made an awesome cornbread stuffing, a few years in a row. I also love creamed onions, but rarely make them, because few people seem to share my enthusiasm for them. One year, I made them, and waaaayyy overestimated the amount I should make. It was like looking at a big bowl full of eyeballs.

The Goldsboro Books SFF Fellowship book for December is signed first edition of Ready Player Two. I emailed to cancel for December, because of what I’d heard about the first book. I am pleased I did now. I wasn’t impressed by the blurbs for either, and I got a bad feeling about them. January’s is a Star Wars book. Not sure I want that either. It’s a shame because some of the books I’ve had from the subscription this year have been fantastic, like The Bone Shard Daughter, Phoenix Extravagant, Red Noise and The Story of Silence. Phoenix and Silence have Enby main characters too.

Tomorrow, my sister and her family, myself, and our younger sister and her partner are all having proper Sunday dinners delivered. I haven’t had a Sunday dinner in ages. I’m getting roast beef and Yorkshire puds. There is sticky toffee pudding and custard for afters. We’re in different towns, but the restaurant that delivers is in between. I can’t wait. I might make extra stuffing if I have any Paxo in.

Apropos nothing relevant but Trump spent $3 million on that recount in Wisconsin; and it ended up with Biden netting another 132 votes.

now you’ve got me missing my mother’s roast beef and Yorkie pudding.

It’s only Yorkshire pudding if it comes from the pudding valley in Yorkshire; otherwise it’s just sparkling batter.

Actually Yorkie sounds like a way of writing round the trademark. Although that’s the name of a chocolate bar round here.

Which features on a few gender studies courses: 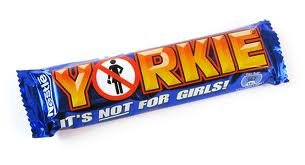 To me, Yorkie pudding is what the raccoon had in mind when it grabbed my neighbor’s Yorkshire terrier and tried to run off with him.

Ben is fine, btw: Jason the neighbor intervened. We do blame that raccoon for the death of my cat a week later, since all we found was half of him.

Back oop north there was a pub I used to go to as a kid; and they served up the food in huge Yorkshire puddings instead of plates. So I empathise with your excitement!

Meanwhile, in countries like Finland and New Zealand that have been able to more or less stamp out domestic transmission of the virus, people are enjoying normal life and missing out on nothing.

Er, Finland gets this reputation as a successful country because we’re located in Europe and that kind of lowers the peer group standard. It’s not anything like NZ level of success.

Last spring, we caught the first wave somewhat early, and racked only about 60 deaths per million people. Then we did almost entirely stamp the virus out in summer. The slow decline continued for many weeks after we returned to pretty much normal life. People were still somewhat cautious, and we had a pretty good tracking system.

Then the virus began slowly rebounding, probably due to a combination of increased international travel and people relaxing their behavior. The government began gradually reinstituting some restrictions on restaurants etc. plus recommending masking. It didn’t help, probably because some people were still relaxing their behavior and because the weather was getting cold. Still, while the rest of Europe was plunging deep into second wave, we were at least delaying the inevitable. For a while, the curve even seemed to have plateaued at relatively low level.

Now, the shit just got real again over the last couple weeks. We have a partial lockdown in parts of the country, and probably more to come. The death tally is (I think) on track to rising past 100 per million, though hopefully not past 200.

@Numenaster
Raccoons got our rabbits when I was a kid, little fuckers learned to unlatch the cages. We had to literally chain the garbage cans shut to keep them out of those. Pretty sure they got our chickens the first time too; the second was foxes for sure, we caught one of them at it and then they set up house under our back shed to raise their pups. We pretty much gave up on outdoor animals at that point.

Last edited 1 year ago by Dalillama

My friend thought a fox was getting into chicken coop somehow. We put a camera to see if we were right. And i shit you not, i watch this fucking footage of a fucking mountain loin come into that coop and take a chicken.

Gotta say, y’all are succeeding at making carnivorous raccoons look far less scary than they did a minute ago. Um, thanks?

Off-topic, I know, but have any of you folks heard of a MGTOW YouTuber named Think Before You Sleep? He started showing up in my recommendations last week and from the (fortunately) limited exposure I’ve had to him so far he strikes me as a weapons-grade jerk even by miggie standards.

@Alan Robertshaw: I know this thread is getting stale, but thanks for your post about the Fanta Menace’s Wisconsin recount. It brings joy to my heart?. Even though, it probably not his own money he’s wasting.

We’ve been following the various cases in legal chit chat spaces. With a mixture of bewilderment; and also that thing where you’re glad it’s not you having to do something but you’re embarrassed on their behalf. (I think there’s a German word for that).

We’ve all had to fight doomed cases. But there’s a professional difference between a hopeless case and an unarguable one.

Generally, we have to run with any instructions a client gives us. However what we mustn’t do is lend ourselves to ‘an abuse of process’. That can be a disciplinary matter in most jurisdictions. Hence a lot of the legal firms withdrawing.

I think Major has done a deal with Kamala Harris. He fixes things for her to step in as president; and she gives him the VP spot.

Ouch. I twisted my ankle last summer even without a dog, out of my sheer clumsiness and foolhardy propensity for walking off road. If I were Biden’s age, there would likely have been either a minor or a major fracture.