In a sort-of-recent thread, the regulars at the popular incel site discussed the burning question of whether or not Jon Arbuckle — the owner of the famously sarcastic orange cat — was an incel. The general consensus: Absolutely.

According to several commenters, the real pathos of Jon’s life was revealed by the cartoon art experiment called Garfield Without Garfield, which removed the cat from the strip and left Jon talking to himself in an empty apartment.

As it turns out, the incels are wrong about Jon: though his romantic failures were a long-running theme of the strip — he got turned down a lot and when he did go on dates they often ended up being disastrous — he did ultimately connect with Garfield’s vet, eventually even marrying her (in the Garfield Cinematic Universe, at least, if not in the strips) . As the Garfield wiki explains:

His biggest crush is Dr. Liz Wilson, Garfield and Odie‘s vet. Over the years, Jon had asked her out on dates numerous times. She usually turned him down but sometimes agreed, however those dates were usually disastrous, often due to Garfield insisting on accompanying them. In the live action films, Garfield: The Movie and Garfield’s A Tale of Two Kitties he became Dr. Liz Wilson’s boyfriend. This later became the case in the comic strip too, from July 2006 onwards. In Garfield’s A Tale of Two Kitties, Liz marries Jon, but this never has become possible in the strips.

One incel stepped in to correct his colleagues on the Liz Wilson question, then offered his own thoughts on another cartoon character often assumed to be something of an incel himself: Charlie Brown. (I mean, by incel logic, how could he not be? He’s a chinless bald child and sort of the ultimate beta.)

Turns out that in the final years of the strip, before creator Charles M. Schultz’ death in 2000, Charlie Brown finally found himself a little red-haired girlfriend (though she wasn’t the little red-haired oneitis of his dreams).

FrothySolutions began with a reference to Jon Arbuckle’s girlfriend before going on to praise Charlie Brown’s apparent pussy slaying prowess:

I have to admit, that last highlighted sentence is not one I ever expected to read in this lifetime, and I doubt you did either. But consider yourself Incel Wisdomized for today.

Aren’t these the same people who complain about remakes of films raping their childhood by infecting them with cooties? To which I can only say, WTF do you think you’re doing when you bring sex into kids’ shows?

Yeah, I saw that play. I think it would actually make incels worse. Maybe it’s for the best that they haven’t read it.

Actually, now that I think about it, it’s rather remarkable how many popular comic strips of the 80s and 90s included hapless schlubby white dude cartoonist avatars. Like Jon in Garfield or Dave Seville in Alvin and the Chipmunks or Adam from Adam@Home. It was basically the “this comic strip sucks” red flag for me. Probably the only one that included a schlubby white dude protagonist or supporting character that I read was FoxTrot or Dilbert (before Scott Adams revealed his power level). FoxTrot at least had some 90s geek cred and the family dynamic was at least believable. Dilbert was the perfect satire for the moment; kind of a shame that it couldn’t adapt (and its writer was terrible).

On the topic of comics, I’m rather dismayed to admit that in one of the ways I was influenced by my douchebag stepfather (who is thankfully not a part of either mine or my mother’s life) would be that he introduced me to Doonesbury, which I did enjoy reading the treasury of the early 1970s back when it was actually subversive and not just a series of fever dreams and aging Boomer anxiety in panel form. Some of the plots in the 80s and 90s were… interesting. Roland Hedley’s journey through Reagan’s Brain was pretty amusing. 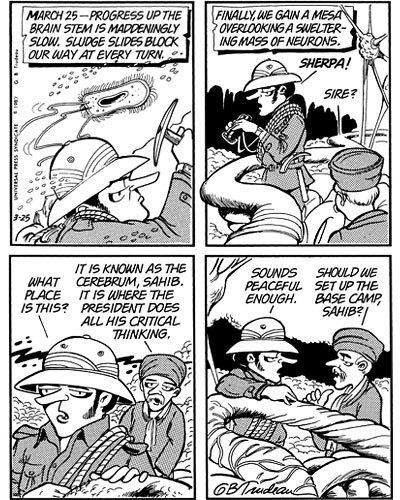 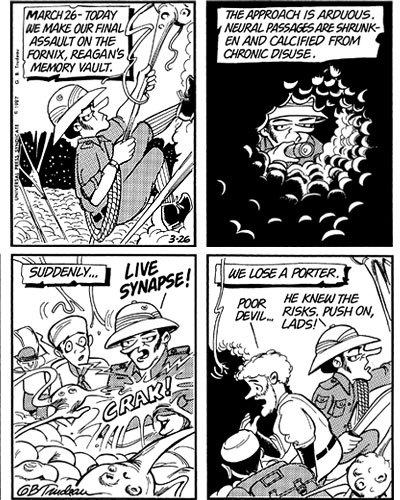 But the Boopsie character was frankly never handled that well and her being possessed by Hunk-ra always came across as a bizarre non-sequiter.

The bizarre array of side characters didn’t help things (looking your way, Mr. Buttz) and even Uncle Duke got a bit tired after a while.

Jeez, why do I remember so much about Doonesbury?!

Andy Capp is probably the character they most wish life was like.

To repel incels, hang “Cathy” strips over the front door and back door and chant “Ack!” thrice.

A friend of mine up in Ottawa actually did a series of sketches of various of the Peanuts characters as teenagers years ago. Including Franklin, Schroeder, and ‘Pig Pen’ setting up as a band. Linus showing up with a suspiciously blue ‘handkerchief’ hanging out of his back pocket. Charlie Brown sitting next to the little red headed girl and checking his pulse to make sure he’s still alive. And Freida (of the naturally curly hair) telling a big pile of young beagles “Y’know, even your father got up and chased rabbits once in a while.” and one of the pups thinking, ** We know, he told us never to repeat his mistakes. **

Basically, he did his best to make them older while still capturing as much of the spirit of the original characters as possible.

@Katamount:
Yeah, unfortunately ‘man as schlub’ is a common comedy thread. And, like most other comedy techniques, can be beaten into the ground. Which, of course, was part of why Jon ended up getting married, was the realization that ‘this isn’t funny anymore, and hasn’t been for a while’.

Way to go FrothySolutions, sexualizing a child in a children’s cartoon.

I’ve noticed something. Jon sure does have a lot of countertops in his house.

The reason why the altered strips with Jon and no Garfield or a non-speaking cat work is because Garfield can’t speak (except via a form of telepathy which is normally only picked up by other cats) and most of the time Jon is acting the way he does while having no idea what his cat is thinking. Without the sardonic commentary, it changes the tone, of course, but it doesn’t fundamentally change the strip.

@Teabug: I’ve always considered that a simplified abstraction. Garfield isn’t always on a countertop, sometimes it’s a table, or on top of the sofa back, or some other furniture. While there were rare occasions when it actually did show him on top of something else, because the strip would be baffling otherwise, it’s more artistic laziness than anything.

Or, you know, there might just be one really long countertop which stretches across both the living room and the dining room, which is kitty’s favorite place. Either way.

Boopsie’s got better in recent years. More or less after the stage where B.D. suddenly looked at her and said “Wait. Since when do you have opinions?”

The Hunk-Ra stuff was initially a parody of J.Z. Knight and her channeling a “Lemurian warrior” entity called “Ramtha”– a bit of New Age stupidity that had its heyday in the later 80s.

Now I want to draw a cartoon strip of Incelman. He’s average-looking but convinced he’s hideous and most strip revolve around his perception of reality and how the many, many, many clues that he’s getting this wrong sail right over his head.

Small problem: I can’t draw and I doubt that I could write in such a tight format.

Frame 1: Incel looming over a woman in that infuriating lean-on-the wall-and-trap-her pose. “Come home with me.”

Frame 2: Close up of her face and the back of his head. She is clearly scared and annoyed
She says, “I have to go. I promised the babysitter I’d be back by midnight.”
He thinks “The slut’s going to fuck Chad in the alley.”

Frame 3: She’s paying off the babysitter and the clock on the wall says 11:57

I remember as a queer kid when kids like me didnt see ourselves on TV, being very confused about Peppermint Patty & Marcy &….Chuck?

Patty & Marcy do fit some lesbian stereotypes, & the “sir” thing is explicitly gender-bending language (it came from Patty being tomboyish and bossy at camp); I dont know whether there was intent but it’s as obviously meant to be as Bert & Ernie.

A lot of characters that fit some queer stereotypes in past were also explicitly given a hetero love interest to avoid offending homophobes.

In fact, that is done today- one modern iteration of Scooby Doo intentionally gave Velma hair bows and boyfriend(s?).

All this makes me wonder how Krazy Kat got away with being non-binary.

I’m guessing the sheer overall weirdness of the strip distracted or drove off anyone who’d have a problem with Krazy being enby. Or a lot of people failed to notice and thought the Kat was female.

Around the same time period, at least one of L. Frank Baum’s minor characters (Chick the Cherub) was explicitly non-binary, and of course Ozma spent many years as a boy named Tip, so I suspect a lot was permitted as long as it was in a fantastic and/or humorous context.