Alt-right trolls have a new insult: NPC, a sort of all-purpose replacement for formerly ubiquitous anti-SJW putdowns like “cuck” and “soyboy,” suggesting that everyone who doesn’t agree with them is a mindless, even soulless, robot, akin to a videogame Non-Player Character who can only respond to stimulus with a small number of preprogrammed lines of dialogue.

As an insult, NPC has been floating around the chans for some time, but it took off in a big way recently after a two-year-old 4chan post resurfaced on social media. In the post, one disaffected anon wrote about how he — I’m assuming it’s a he — had started to look upon most of those he encountered on a daily basis as little more than real-world NPCs,

For these NPC “flesh piles”, he continued, politics is literally no more than a collection of handy catchphrases.

If you get in a discussion with them it’s always the same buzzwords and hackneyed arguments. … it’s like in a vidya [game] when you accidentally talk to somebody twice and they give you the exact same lines word for word once more.

As journalist Cecilia D’Anastasio has recently noted in Kotaku, this is literal dehumanization, a way for alt-rightists and their fellow travelers to reduce their “enemies [to] objects, pawns, strawmen, tools.”

But, I would add, it’s also proven to be a great way for the trolls to demonstrate what completely original thinkers they are, and how seldom they resort to meaningless buzzwords.

By the way, did I mention that these guys really hate buzzwords?

Press F to Pay Respects to these brave and original thinkers.

Wow. Just wow. How could you even believe everyone who doesn’t think exactly like you do is just an empty soulless shell

It’s a grand old randian tradition, that’s for sure. Everyone who doesn’t embrace seriousnes selfishness as the highest virtue is in fact totally consumed with self loathing and suicidal ideation and wants to take everyone else with them.

The first of these jerk-people hadda be Paul/Saul of Tarsus who, in spite of the things Jesus is reported to have said in the four gospels, STILL successfully turned the apostate rabbi into a god….

Alternatively, he was an asshole with temporal lobe epilepsy who had a fit and the built his own religion using nascent christianity as a foundation. He and his bros wrote most of the new testament, including the bits about how women need to shut up and subjugate themselves.

Oh? Well, wish I knew what I’d been referencing…

Sorry – that’s an example of my own solipsism at work! Too many literary references in my head, so I assume they are also in everyone else’s head.

I was thinking of the Iain M. Banks novel “Against a Dark Background”. It’s a standalone – not one of his Culture novels – set on an isolated star system which has developed numerous religious sects and warring mafia-style business/family concerns.

At one point, the main character is kidnapped by Solipsists, a group of people who decide that everyone else (including other Solipsists) are merely “apparences”. They are heavily armed, know no fear, and react to the deaths of others in their gang by arguing that the disappearance of an “apparence” is a sign that their will is becoming stronger.

One of them literally reacts to an inconvenient presence by putting his fingers in his ears, closing his eyes, and humming.

It seems quite apt.

So – enslaved sex bots: another bit of the right-wing MRA-bros fantasy world, right there.

Speaking of internet slang, I was greatly amused recently when someone on a Finnish forum referred to fly-by reactionary commenters as “nym-in trolls”

(my translation from Finnish “nyymipeikko”, hopefully conveys the Moomin reference)

I can’t even begin to express how wonderful I find this. I’m immediately plunged back into Moominvalley.
*happy sigh*

Nostalgia for the past is endless…the world always looks better in the rear-view mirror.

In the 1970s, there was a wave of nostalgia for the 1950s. Why people would think the era of Joe McCarthy, Red-hunting, nuclear war fears, the Korean War, the horrific violence against civil rights protestors, and the Giants and Dodgers moving to the west coast is something to be nostalgic about, I don’t know.

And in 1940, Time magazine proclaimed American youth to be a “flabby, leftist, pacifist lot.” Today they’re the “Greatest Generation.”

Nostalgia for the past is a thing because the past is already written. You can ignore all the bad bits and moon over the stuff you like. It’s the present and the future that are uncertain and in flux, and for most people that’s some scary shit.

That’s the thing: I don’t consider things “better” in the 80s or 90s. Just different more than anything else. Perhaps a little slower. A little simpler. But pretty much the opposite of “better.” I mean, slower and simpler I think is just childhood more than the time period that your childhood took place. There were less people and you had less days to pack into your memory.

That’s part of why I try to practice a more responsible form of nostalgia. For one, I’ve been kind of horrified that so many of my nostalgic memories revolve around brand names. Leafing through the Consumers Distributing Christmas catalogue. Miracle Mart. Bargain Harold’s. Bi-Way. Woolco. Pascals.

There’s a whole YouTube channel that just uploads old Betamax and VHS clips of TV shows and commercials that aired in Ontario in the 70s, 80s and 90s. Watching old news broadcasts, I find that the issues that faced the world were actually quite similar, it’s really only the aesthetics that have changed. There was still murder and international strife in 1985, it’s just that the only place you heard about it was on the radio, on the 6PM news and on the corner newspaper box.

That’s why I’m always skeptical of the filtered nostalgia of pop culture. Ready Player One was particularly notorious on in this regard: sure, the 80s were great if the only thing you remember about it was Back To The Future and Van Halen… but that was also when Willy Pickton’s rampage was in full swing and AIDS was storming across the planet unchecked.

I get a lot more meat of nostalgia out of photos, film clips and news articles from that time than pre-packaged “remember this movie” or “remember that song” reminiscence. Because I will always associate Level 42’s “Something About You” with clothes shopping for Osh Kosh at the Scarborough Town Centre when I was like 5. 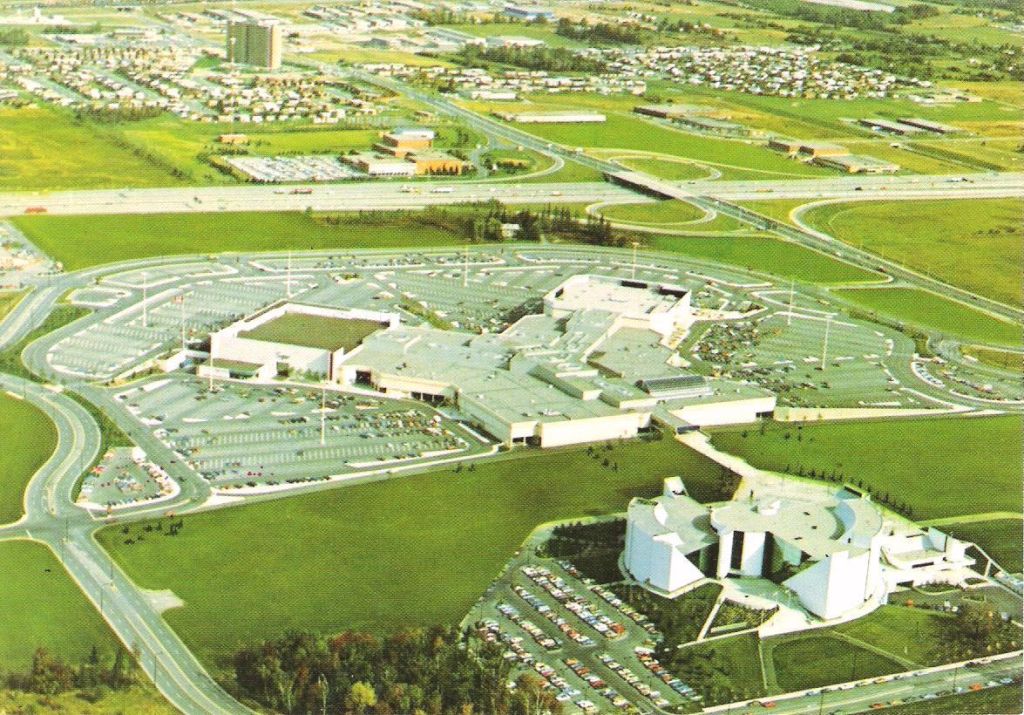 No going back to the way things used to be.

Nostalgia for the past is a thing because the past is already written. You can ignore all the bad bits and moon over the stuff you like. It’s the present and the future that are uncertain and in flux, and for most people that’s some scary shit.

Absolutely right…not to mention that nostalgia for the past involves remembering one’s youth, when you were handsome/pretty, your favorite music was played regularly, you could dance well, and everything was (theoretically) in front of you.

Every generation thinks it’s wiser than the past generation and tougher than present and future generations. Or something like that.

@Katamount:
Consumer’s Distributing, now there’s a blast from the past.

(I usually joke that some people have photographic memories; I have a phonographic memory. Songs and jingles stick around.)

On the other hand, your pictures remind me of the aerial photograph collages I saw in Metro Hall years back, and just how different the city was between the two of them. Especially in Scarborough, which was mostly still wilderness back in the 1950s or so of the first photograph.

Also, yes, people have commented before that for most people, ‘the good music’ is what was created when they were young. Nostalgia for most always seems to focus on the time when they were old enough to be able to do things on their own, and young enough to get away with it.

Which may be part of why so much nostalgia is white-cis-straight-male based, because people who don’t fall into those categories have a lot less of ‘young enough to get away with it’. That’s an interesting idea, that the ability to have nostalgia is dependent on having a certain level of privilege to start with.

all you seem really, really old

Which may be part of why so much nostalgia is white-cis-straight-male based, because people who don’t fall into those categories have a lot less of ‘young enough to get away with it’. That’s an interesting idea, that the ability to have nostalgia is dependent on having a certain level of privilege to start with.

Nailed it on the head with that one. If you were young and aboriginal or black or gay in the 80s or 90s, you had to do a lot of growing up and fast to handle the prejudice being thrown at you. Those memories probably aren’t as peachy.

I also think it’s worth going past the time you were born to find out what life was like in decades past. What you find can be very interesting.

Yeah… “NPC” is all goofy and shit, but think of this in terms of what the Alt-Right is now referring to as “Weaponized Autism”…

Referring to someone as an “NPC” is essentially relegating their humanity to nothing more than a computer generated enemy in a video game that can be harmed with not only impunity, but reward…

This meme is harmless and original. You idiots need to stop being paranoid assholes.

And if you believe that; than there’s kittens on Mars. A meme intended to dehumanize people in order to treat them as “others and enemy’s to destroy”, is as dangerous as pushing anti-semetic conspiracy theories like “the Holocaust is a hoax”.

But you know that; and your playing a “Card Say’s Moop’s” maneuver.

And no: your username is blatant falsehood; Incels are Neo-ractionary hate movements, not “human rights”. Wanna know why: because your ilk wants to strip people of THEIR human rights; because your bigoted authoritarians that like stripping rights from people.

Only an NPC would assume “He”.