It’s PLEDGE DRIVE again! WHTM is now ad free and entirely dependent on folks like you for its continued existence. If you can afford it, please DONATE HERE NOW! Thanks!

With another month-long-week coming to a close, I thought I would take a few moments to share with you some of the feedback I get from, well, let’s just say these guys aren’t exactly fans.

These are the sorts of comments — some from new would-be commenters, others from long-banned trolls — that I generally don’t let through moderation. But sometimes they are too terrible not to share.

Let’s stat with this dude, who has somehow come to the conclusion that this site is some sort of soyboy shrine to … Noam Chomsky?

I think this is the first time I’ve seen someone try to insult someone else’s intelligence by accusing them of having slightly above-average IQ scores.

Here’s one from a dude whose turns-ons include women crying.

This next guy was evidently convinced that I would be SO devastated by his SICK BURN that he came back several weeks later to post a new iteration of it.

Setting aside this guy’s weird fixation on my alleged sweatiness, this is an “argument” that’s been floating around the manosphere for years, especially popular with PUAs and incels who want to be able to explain away the fact that women often prefer “beta” males over the alpha Chad types that manosphere dogma insists are the only dudes who know how to make the ladies, er, tingle.

Sure on the outside it might seem like a lot of women vastly prefer “betas”over assholes, this argument goes, but really these women are just hiding their secret disgust for them. It’s yet another way for misogynists to wave away all the evidence in plain view that proves their theories about female sexuality are bullshit.

This next guy is s long-banned shitposter who returns again and again to this blog to post comments, many of extraordinary length, that he knows are never going to see the light of day. Unless they are so ridiculously reprehensible that I decide to put them up in a post like this. CW: Rape fantasies, racism, and something that is either a typo or a misfired racist joke.

There’s a lot wrong here but let me just say a word about that last bit of bullshit. We don’t actually get “men last in the life bots.” Yes, more than a hundred years ago, women (and rich people generally) were first in line for the Titanic lifeboats. But even then “women and children first” was never a standard evacuation policy. Ever been on a plane? When the flight attendants explain the procedures for an “emergency landing” do they ever mention putting women first? Because how would that even work?

But I digress. There are more important issues to consider. Like semen. In particular, Mr. Man Splainer’s delicious, semen — which in addition to providing a tasty snack can apparently also be used to BUILD CIVILIZATION ITSELF.

I’m going to end this MALEBAG here, because, seriously, nothing in any of the other comments I’ve still got stored in the moderation queue is going to beat “women suck dick because dick built and maintained all upon the earth.”

they are TAKING THEIR BALL AND GOING HOME!

… with the added hilarity that of course, in this instance, it isn’t in fact their ball and never was.

Hey, the mgtowpuacels can take their jumper that forms a tiny fraction of one of the goalposts, though! The rest of humanity will just have to muddle on by with a zillion other jumpers contributed by women and all the men who are a bit less daft and deluded.

Screamed the man longing for the apocalypse to come and sweep it all away.

Well, you know how it is:”The dick giveth, the dick taketh away.”

But do you think mansplainer has a more nefarious reason to post here, or he was just radicalized and doesn’t know what he’s doing? It seems like a waste to come to a feminist website (where the comments go through moderation as well) saying this kind of thing. I assumed he just had one hand in the keyboard and the other down his pants.

Sly Fawkes (aka The Real Cie)

Probably WTMI, but the times I’ve done what was mentioned in the title of this post, I did it because I liked the guy, however misguided that affection may have been.
Also, I’d be really amused to see a bunch of literal dicks building and maintaining stuff. Maybe I need to draw a cartoon about it. If I do, I’ll send you a copy.
The song “Detachable Penis” by King Missile comes to mind as I write this.

@Tansy Poisoning – I dunno, the Yandex account caught my eye. Maybe it’s a moonlighting Russian troll who succumbed to his own propaganda.

I always love the argumentum ad coitus, though. “My opinion is correct because I had sex once.”

they are TAKING THEIR BALL AND GOING HOME!

No, no, they’re taking their balls and going home. Though they never stop talking about them.

Humans can taste garlic through their feet.

I assume you’re referring to this phenomenon?:
https://www.popsci.com/you-can-taste-garlic-with-your-feet
The title is a bit clickbaity, since the taste sensation isn’t actually experienced in the subject’s feet (as far as I can determine; independent investigation is in order after I hit Kroger’s produce section.)

Welcome to the mammoth hunt; here’s your spork–and I can’t help noticing that your icon references a show that would break what passes for the Manosphere’s collective brain.

“(The)d–k built and maintained all upon the earth”

This is shaping up to be the worst Zardoz sequel ever.

Yeah, that’s the idea I was thinking of. Although I haven’t tried stomping garlic bulbs like grapes at a vineyard to see if it’s true.

Do you do tutorials? 😀

I mean, with those standards, maybe dicks could get shit done wearing teeny, tiny hardhats.

I kind of want to keep a pet geoduck, just to help prospective male dates understand their place. No human, devil, or god can humble those clams in the penis department.

CN: this clam looks like a gigantic penis. I’m serious. 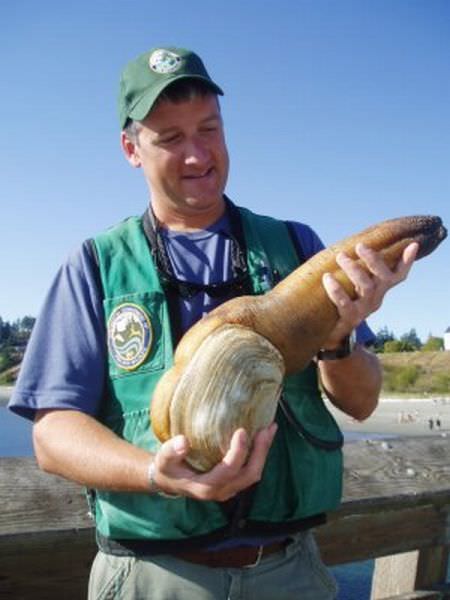 @solecism
I thought of that scene, too!

Geoducks are the best! They really should be the mascot of the PNW.

Geoducks are the best! They really should be the mascot of the PNW.

As it happens, Speedy the Geoduck is the mascot of Evergreen College: http://www.evergreen.edu/geoduck

@Full Metal Ox
My newest favorite show ❤
It gives me the warm fuzzies and helped me get more open about my bisexuality.
And on another personal note is helping me through depression

Ahh how I love Steven Universe

Hrm. What if women would rather swamp for themselves? Or moor?