Some links for you this Thursday. I’ll start with one that’s actually pretty heartening, before getting into the more hilarious and/or appalling stuff.

Dominant Male Atheist Leaders Seem to Have a Problem with Women, by Amanda Marcotte at AlterNet

Quiz: Can you tell the difference between National Review’s Kevin Williamson and a 4chan troll? by Elias Isquith at Salon

[Note: That’s the “capital punishment for women who have abortions” one. Also, it’s not the Kevin Williamson of Dawson’s Creek fame. Different guy entirely.]

The Sexual (and Racial) Politics of Nerd Culture: A Dialogue* by Priya Alika Elias and Ezekiel Kweku at The Toast

Update RE: YouTube Sex Abuse by Laci Green on her blog.  See more on the issue and her video on Sam Pepper here.

I’ll have you know that every one of those stock photos are registered republican voters.

Well. Time to go hide in my box, again:
http://alanapost.net/post/82082675/people-are-no-damn-good-william-steig-the

I chose to only focus on the troll spending jail time, for the sake of my brain.

(And in much more pleasant news, AAAAH BOSTON. STILL EXCITED. Also meeting everyone and his sister Jane there, it feels like. We are very popular!)

Yes, Mr. Steig just captures so much of my personal experience. Also, Samuel Clemens (in his more misanthropic pessimism).

Now I really want to go to Boston! I’ve been there on The Last of Us 😛 but I read somewhere that the major cities in that game are geographically waaay off. [shrug] A game’s got to have some faults!

So, do ‘ordinary’ Republicans really exist, or is that something made up for TV? Snarky Canadians want to know…

Yeah, we lived there a few years, before finally being driven off by sheer economics. But we’re coming in tomorrow, staying till Thursday, and we’ll be meeting up with kirbywarp and emilygoddess! Perhaps you too would like to join the Mini Mammoth Meet-Up?

(Also, I’ll be at MICE, a wonderful little comics con. If any local Mammoths are interested in comics, art, or just local creators, stop by! It’s free!)

@puddleglum Define “normal?” lol I’ve got a fair number of Republican friends and family. Lot of people with military and/or religious backgrounds, and mostly (but not exclusively) white.

That ad is funny as hell, though. 😀

We could learn from the Brits, who apparently mean business in prosecuting rape-happy trolls.

I sincerely hope the FBI will follow up on our tips about ThePhilosophyOfRape.

I got these Steig glasses for a dear friend of mine: 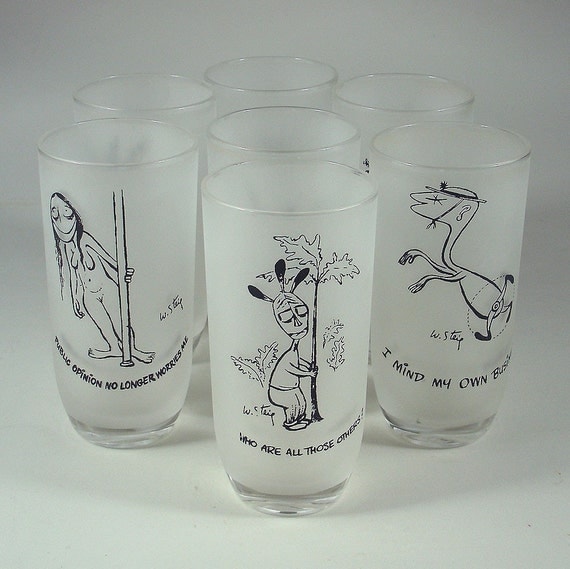 LBT, I am no longer in Boston, for the same reason. I do still have most of my family there, though.

Yeah, I don’t miss Boston, but I do miss my friends there. I was a social success there, and I’m getting kind of tired of moving hours away and then having to start over every year. It’d be NICE to rest on my laurels, dammit!

When the notes were first announced, I considered protesting that Miss Austen deserved something better than only ten pounds, which was the amount given by Sir Thomas Bertram to Fanny Price when she went on her visit home to Portsmouth, and also by Lady Bertram to Fanny’s brother William (which greatly angered her sister Mrs Norris, who had given William “something considerable” – later revealed by one of the Austen cousins to have been one pound). My thought would have been for a fifty pound note, at least four such figuring in the plot of *Love and Freindship* (her original spelling).

@ cloudiah – Must be a very dear friend, indeed! Thanks, though, because I now know what to ask MrGrump for for Christmas!

SJWs destroyed gaming? What’s next? Heavy metal? (From Reddit, but I know a lot of people don’t like to go there so it’s an archived link.)

Yes, Redditors, we destroyed gaming! We have replaced every stubbly white dude with a fat trans lesbian of color! There will be no more killing or bullets, only feelings and rainbows!

AND NOW WE ARE COMING FOR YOU.

LBT
“There will be no more killing or bullets, only feelings and rainbows!”
http://youtu.be/T9vtbGChpWY
XD

In the comments on that dialogue on The Toast, there is a user named PierrePoutine. Is it Katz, or an imposter?!

In the comments on that dialogue on The Toast, there is a user named PierrePoutine. Is it Katz, or an imposter?!